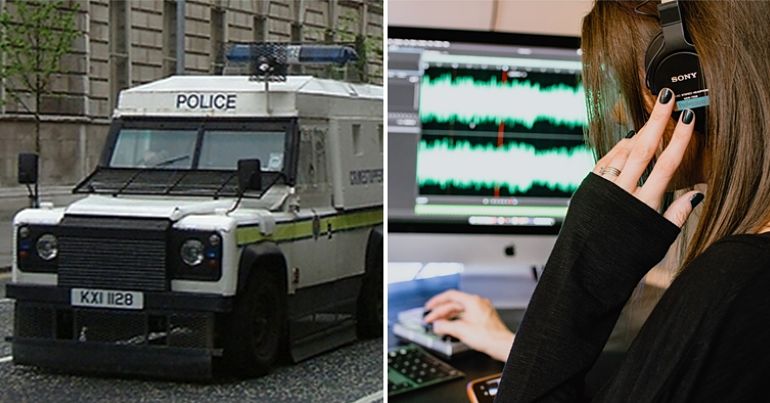 The long-running trial of three men accused of involvement in an attack on a police convoy in Belfast – Colin Duffy, Henry Fitzsimons and Alex McCrory – could soon be at an end. The trial has been heard in Belfast in a Diplock non-jury court since March 2019. The men were first charged in December 2013.

The attack on the convoy

A PSNI convoy was attacked in north Belfast on 5 December 2013. Some time afterwards police recovered two AK47 assault rifles apparently used in that attack. Duffy, Fitzsimons and McRory were remanded in custody in December 2013.

The men were allegedly recorded and videoed by MI5 in a park in Lurgan, discussing the attack the following day. Voice experts and former colleagues Professor Peter French and Dr Christin Kirchhubel gave evidence in court about this alleged recording. Dr Kirchhubel had once worked for Professor French. They said the alleged undercover MI5 recordings of the three men supported the claim that they’re the suspects in the attack on police.

However, analysis of the three men’s voices was inconsistent. Professor French said his analysis provided modest to very strong support that these men are the suspects in the attack. Dr Kirchhubel, admitted the recordings ranged from:

Dr Kirchhubel said comparison recordings provided ‘moderate and strong support’ that these were the men on the recordings. However, she admitted voice analysis was opinion based and she carried out her work without access to the actual recording devices.

Additionally, she agreed the analysis of the recordings could be biased as the police transcripts contained the names of the accused. The defence also claimed there had been no independent verification of these recordings.

Dr Kirchhubel rejected suggestions from the defence that she was influenced by her former boss’ report. She accepted the possibility of cognitive bias, but that she could deal with this through awareness of it. The defence put it to her that the:

knowledge was there … in other words the damage was done…the bias is inherent in that police have made up their own mind.

The knowledge was there. Yes,

And she said it would have been better if the police not provided background information. Later, under cross-examination, she said she couldn’t give any numeric research to support the accusation that McCrory was one of the men recorded. Nor could she say how many ‘hundreds of thousands of people’ could have the same speech characteristics as McCrory.

An MI5 technical operative with the cipher (PIN) 9281, took the stand during this long-running trial. This operative had cyber security expertise and also downloaded the recording onto MI5’s computer system. He refused to answer a number of defence questions because of “national security”.

This operative said he didn’t keep any recording of this operation that could be used in court as evidence. The defence put it to him that he “deliberately destroyed evidence in this case”. He denied this. PIN 9281 also said recordings from the park were downloaded onto three USB flash drives. However, the USB used as a master copy has since disappeared.

The court heard that two viruses had been found on two separate copies of one of the other USB drives. At least one of the viruses could have resulted in the recordings being altered. Furthermore, the computer used to download onto the USBs had been “decommissioned”.

Oral submissions in relation to this trial will continue some time next month.