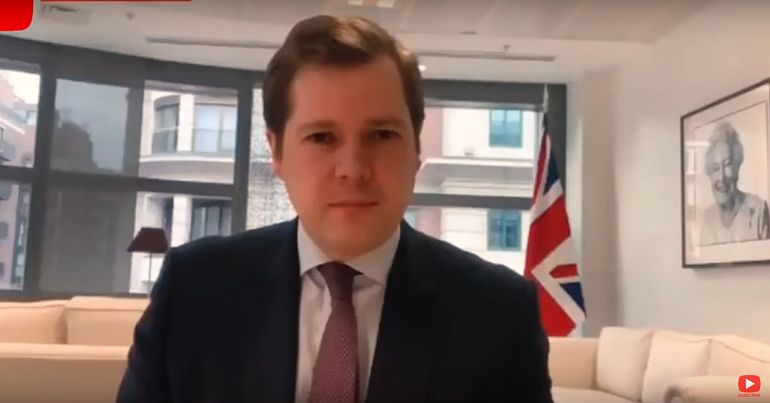 Samuel Johnson famously said: “patriotism is the last refuge of a scoundrel”. Conversely, the ridiculing of patriotism is an essential ingredient of a free society.

But that freedom is constantly tested. On Thursday 18 March, BBC Breakfast presenter Charlie Stayt interviewed UK government minister Robert Jenrick. Behind Jenrick was a large Union Jack flag, and on his wall hung a photo of the Queen. At the conclusion of the interview, Stayt – known for his dry and often sarcastic wit – quipped to Jenrick:

Robert Jenrick, thank you, I think your flag is not up to standard size for government interview measurements. I think it’s just a little bit small, but that’s your department really.

In the background co-presenter Naga Munchetty could be heard laughing. And Jenrick smiled.

Munchetty liked a number of tweets in response to the incident on Twitter. However, those likes may have gone against BBC social media guidance, and so she undid them:

I 'liked' tweets today that were offensive in nature about the use of the British flag as a backdrop in a government interview this morning.
I have since removed these 'likes'.
This do not represent the views of me or the BBC.
I apologise for any offence taken.
Naga

Munchetty has gotten in hot water before with her employer, when in July 2019 she commented on US president Donald Trump’s racism:

"I've been told as a woman of colour to 'go home'…"@BBCNaga shares her experience as we discuss the reaction to comments made by President Trump. pic.twitter.com/u0HL5tEdgt

With regard to Munchetty’s latest ‘transgression’, this could be summed up as follows: white man makes sarcastic remark, woman of colour laughs and likes tweets, but it’s her who’s made to apologise.

Unsurprisingly, there were a number of responses to what happened on social media:

One man told Munchetty she has nothing to apologise for and that he finds the “adoration” of the flag sinister:

You have nothing to apologise for. A large proportion of right minded people find this sinister adoration of the flag as an unwanted daily intrusion into the news agenda. BBC should not be afraid to call it out and ridicule the ridiculous

And some found it impossible to hold back the humour when it comes to flags:

Gavin Williamson wins the flag wars by having two transplanted into his ears. pic.twitter.com/A9k681AI1F

You used your position to unlawfully help a billionaire avoid £40m in tax.

Avoiding paying taxes – money which improves this country – is the most unpatriotic thing a person can do.

Only an idiot would fall for your cheap flag and phoney patriotism.https://t.co/AciOJLhoAA

Writer, comic and musician Mike Harding reminded us that:

The Union Jack was known to millions as "The Butcher's Apron" because of the massacres, invasions and colonisations carried out by those carrying it https://t.co/y8e4wAixSR

Or maybe the furore over the size of the flag helps to distract from the £2.6m makeover of a Downing Street press room:

EXCLUSIVE: We've been leaked the first pictures from inside Downing Street's new £2.6m media briefing room. The blue TV set includes four Union Jack flags and was built with the help of a Russian-owned firm.

Full write-up from my producer @NathanLeeTV.https://t.co/cmZ2xnJAcI

According to HuffPost, Labour leader Keir Starmer has a penchant for the Union Jack too, following:

a leaked strategy presentation that suggested the party should “use the flag, veterans and dressing smartly” to win back disaffected voters.

In other words, the use of flags, by whatever party, is about gaining or retaining power. And with that power comes not just responsibility but, invariably, abuse and corruption. The gaudy displaying of flags distracts from the latest political scandal.

Those complaining about the BBC & Union Jack..

Why exactly are you SO proud to be British? Is it the 30% of children growing up in poverty? The 300,000 people sleeping on the streets? The government who won’t give nurses a pay rise but will spend millions on a new briefing room?

Or there’s Britain’s world-beating response to the pandemic. According to one set of figures, the number of coronavirus (Covid-19) deaths to date in the UK is 126,122. Compare this to China, which even with its vastly bigger population of 1.4 billion has had only 4,636 coronavirus deaths. That speaks volumes.

There are also many examples of Tory cronyism, particularly with regard to personal protective equipment (PPE) contracts.

And then there’s the erosion of workers’ rights post-Brexit:

Hard to believe that this lying government that lies about everything should have lied when they said workers’ rights would be safe after Brexit. pic.twitter.com/KL0jXLlWKK

Or the loss of millions of pounds in shares trading in the first days after the end of the Brexit transition. No doubt these losses will trickle down to the poorest in society:

Britain appears to have lost a trading business worth circa £1.5 TRILLION a year…

Or, post-Brexit, there’s the ending of free movement – unless you’re rich and powerful:

Of course the wealthy are already making sure of their continued EU Citizenship and FOM. pic.twitter.com/fWyaU52CWU

Then there are the endless lies by politicians – particularly by Johnson. Here are a few examples:

There are many, many more lies – all attributable to the pathological liar who somehow continues to govern the UK.

In January 2021, it was reported that Richard Sharp, a former Goldman Sachs banker who donated an estimated £416k to the Conservative Party, was to be chair of the BBC’s board of directors. Sharp happens to be the former boss of UK chancellor Rishi Sunak. He was also an economic adviser to Johnson during Johnson’s time as mayor of London. Sharp joins Conservative supporter Tim Davie, who took over as BBC director general last September.

So when the BBC is run by two Conservative Party supporters, perhaps it’s no coincidence that Munchetty was forced to apologise for liking some tweets. Although this may provide some insight into the mindset of the BBC under its new command. It doesn’t bode well. And the nature of this mindset is of particular cause for concern when we have a government characterised by lies, cronyism, and sheer corruption.