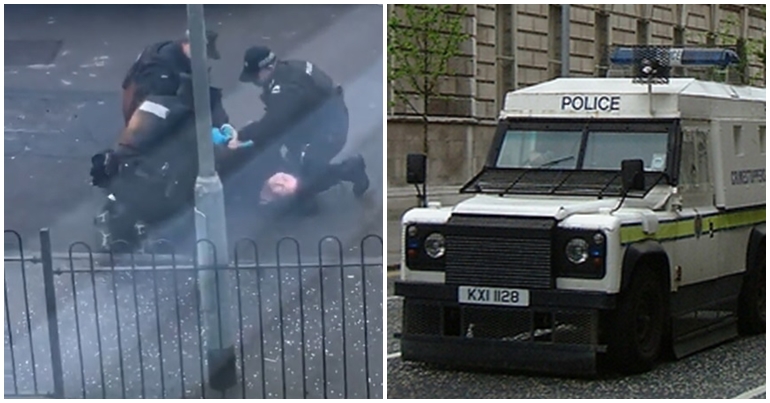 As The Canary reported, loyalist terrorist organisations have withdrawn their support for the Belfast peace agreement. This withdrawal was to protest the EU and UK Brexit protocol which started on 1 January 2021.

However, despite this threat to peace from British loyalists, it’s Irish republican communities who are predominantly under the police microscope. And republican activists also allege MI5 involvement targeting ordinary family homes.

On 2 February, there was an Ulster Volunteer Force (UVF) “show of strength” in east Belfast. A group of masked people assembled. One media report said the gathering is “linked to internal tensions over drugs”.

Gatherings of more than six people aren’t allowed in the north under coronavirus (Covid-19) lockdown regulations. But despite the size of this gathering, police didn’t appear to intervene. In fact, Sinn Féin’s Gerry Kelly said the police “made minimal efforts to intervene”. Kelly added:

the PSNI [police] merely shepherded the gang out of the area.

Just three days later, a group met to commemorate the 1992 loyalist killing of five people in the Irish republican community. On this occasion, police arrested Mark Sykes after attempting to break up the gathering. Sykes was one of the survivors of the 1992 attack.

was deliberately constructed and planted by British Military Intelligence with the sole purpose of eavesdropping and recording potentially months of audio/sound. They then collect the device to charge and extract the collated data and return it to a spot of their choice.

Then on 8 March, Saoradh claimed it came across:

armed members of the British Crown Forces who were protecting MI5 agents in civilian clothing, who themselves were installing a new camera onto the mast.

Writing in junge Welt on 20 March, Dieter Reinisch said the PSNI and secret service have intensified their activities against Irish republicans. Reinisch notes there’s been a continuous stream of arrests and house searches in early March.

In fact, on 4 March, the PSNI arrested a 35-year-old woman as part of Operation Arbacia. This operation is part of the PSNI’s investigation into the activities of the New IRA.

Then, on 18 March, the PSNI raided a family home in a working class republican estate in Derry city’s Creggan area. Saoradh said:

members of the British Crown Forces were on the streets of Creggan yesterday [18 March], where they invaded a family home, assaulted the occupants, stole property, terrorised children, damaged the house and ransacked it from top to bottom.

They assaulted children and caused public disorder for almost 12 hours in a heavily built up area, disrupting the lives of residents including the elderly, putting them at risk of injury or worse.

The vast majority of the public welcome the action we are taking against those who are causing serious harm to the community.

The PSNI told The Canary:

The operation was led by detectives from the Police Service of Northern Ireland Terrorism Investigation Unit (TIU) with assistance from District Policing colleagues and Operational Support Department.

The operation, called Ledging, is a discrete, stand-alone strand of Operation Arbacia, looking specifically at the New IRA’s bomb making activities as well as the group’s storage of explosive devices and equipment.

The Canary recently reported on British loyalists “blood-soaked” contribution to the 30-year conflict in Ireland. Loyalists called a ceasefire at the end of that conflict, but The Canary article also highlighted how loyalists breached their ceasefire since they signed the peace agreement.

Now that they’ve officially withdrawn from the agreement, it’s telling that the PSNI is failing to hold loyalists to account. It’s preoccupied with targeting republicans instead.