As the media fixates on Bristol, don’t forget thousands took to the streets this weekend to #KillTheBill - Canary 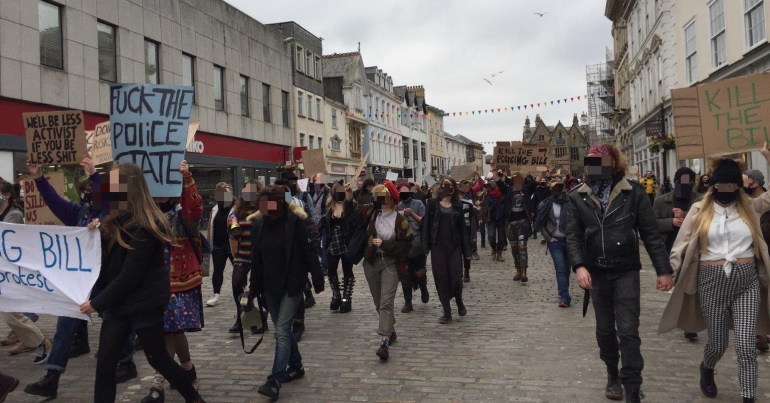 As the controversial Police, Crime, Sentencing and Courts bill languishes in the committee stage, an increasing number of people have shown their opposition to the legislation.

But while the escalation at the Bristol protest has dominated the headlines, let’s not forget that thousands of people took to the streets to protest the bill across the country at the weekend.

The bill will give the police increased powers to impose conditions on protests as well as criminalising Gypsy, Roma and Traveller communities.

Hundreds of people showed up to support the right to protest in Birmingham. Demonstrators socially distanced as they gathered at Victoria Square in the city.

Amazing turnout in Birmingham today to #KillTheBill and defend our right to protest.

Everyone who came showed WM police, the PCC candidates and BCC: we won't be ruled by fear. We're policed by consent, & can remove consent.

There is no place for police brutality in Birmingham.

Very proud to see numbers out for the #killthebill protest in Birmingham. Tories want to push it into the long grass but that won't happen. We are organised and against it! pic.twitter.com/iZCTBfeLl6

Over a thousand people joined a march against the bill in Brighton on Saturday 20 March. The protesters gathered at around 2pm and marched through the streets, disrupting some bus services and traffic.

After hearing speeches, protesters moved through the city, raising chants such as “we will not be silenced” .

The demonstrators reportedly started heading home after 4pm, after a peaceful march.

The protest against the bill in Bristol has been widely reported, after some protesters set police cars on fire. Seven arrests have already been made.

Prior to this, and until the police moved in, the demonstration which began on College Green, had been peaceful.

Hundreds of people gathered in the centre of Leeds on Sunday to protest the legislation.

Outside the Civic Hall, protesters listened to speeches and poems. As reported by the Yorkshire Evening Post, One speaker said:

Throughout history many significant improvements have been gained through protest. We have stood collective in our fight of injustice many times before. It is our time to make history and fight for improvements for our children and grandchildren.

They are already fighting climate change and we need to give them the tools to do that and the democratic right to protest is one of them. This Bill is impacting on our freedoms and we shall not let it pass. Make no mistake, this Bill comes from a place of fear. They are frightened of our collective action – and they should be. We are so powerful when we come together and they know it.

Chants of ‘Kill The Bill’ in Leeds. A huge spirit of solidarity here. #KillTheBill pic.twitter.com/EMVPtaNygS

Two people were arrested at a protest against the bill in Liverpool on Saturday that attracted a large crowd.

I was proud to support yesterday's protest in Liverpool against the controversial Police, Crime, Courts and Sentencing Bill.

We have to oppose the #PoliceCrackdownBill every step of the way, in Parliament in the courts, and in the streets.#KillTheBillpic.twitter.com/Jiz7Qk222k

Thousands of demonstrators chanted “kill the bill” as they took to the streets of Manchester on Saturday.

We’re just angry and upset like everyone else. It’s the fact that the whole society we live in seems violent, particularly towards women of colour and disabled women.

It’s getting worse. I wanted to come out as a tribute to the women who are murdered and assaulted.

Protesters said demonstrations would continue until they were successful in stopping the bill’s process through parliament.

Three people were arrested at a Sunday demonstration that attracted around 600 people. One of the arrested protesters was photographed being pinned to the ground by multiple officers.

Protesters marched through the streets of Newcastle under heavy police presence. They called for the freedom to protest and an end to gendered violence.

Anyone wanting to leave flowers would've had to go thru line of heavy-duty men in riot gear- not a good look. pic.twitter.com/E1r8losqhS

Police monitored a peaceful protest against the bill in Truro in Cornwall attended by more than 200 demonstrators. The Resist G7 Coalition, who organised the protest said:

We made it clear: The Cornish community stands against the government’s push towards authoritarianism. We can’t thank you enough. To those that came today and those that watched and shared from home – you did this.

It is your continued support that grows this movement. It is your commitment to determined actions which will help us kill this bill. The streets are where we won our rights, and the streets are how we keep them. Do not let this inept government throw away your democratic freedoms.

Kill the #PoliceCrimeSentencingCourtsBill. We have the right to peaceful protest. This bill completely undermines our rights. #KillTheBill #Truro pic.twitter.com/kQT7SxbV0A

So inspiring to see hundreds taking to the streets to #KillTheBill in Truro today. Cornwall is rising. And so is the rest of the country. Solidarity to all resisting the #PoliceCrackdownBill this weekend. pic.twitter.com/wrJCFxOKB5

Similarly, Saturday saw several protests against the bill in Wales. The largest was in Cardiff, but demonstrators also turned out in Bangor and Wrexham.

In Wrexham, the demonstrators marched to lay their placards at MP Sarah Atherton’s office. Bangor saw protesters hold a minute of silence to “honour the sisters we have lost” and lay flowers of remembrance.

People in Cardiff have been protesting against South Wales police since Mohamud Hassan died in January after being held overnight in police custody. Four police officers have been served misconduct notices in relation to his death.

The large demonstration is now heading down Bute St chanting 'No Justice, No Peace, No Racist Police.' pic.twitter.com/ycQGLaZJmD

A petition against the bill now has almost 200,000 signatures, meaning it will be debated in parliament.

With more protests planned over the coming weeks, the number of people against this bill could not be clearer. With the bill still in parliament, we must continue to fight for our right to protest.

From Manchester to London, through Bristol and Leeds, the past week has seen a mass uprising against the #PoliceCrackdownBill.

We're proud to be part of the movement to #KillTheBill.
Whether you've been out on the streets or protesting from home, we see you.

And we will win.