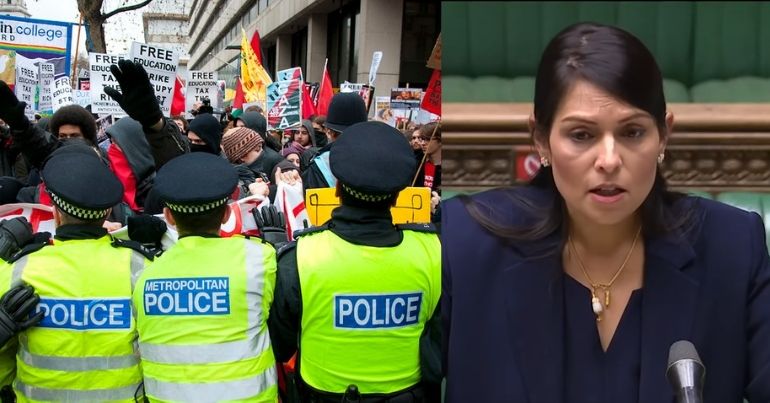 Today marks the second reading of the Police, Crime, Sentencing & Courts Bill, which will increase police powers and allow them to clamp down on protests.

The bill, spearheaded by home secretary Priti Patel, had already met with criticism, but has come under renewed scrutiny in the wake of police actions at the vigil for Sarah Everard on Clapham Common.

During the gathering, police descended to break up the vigil, grabbing those present and arresting some. Their actions were widely criticised as “neither appropriate nor proportionate”.

After initially being rumoured to abstain, Labour announced it would vote against the bill as it returns to the House of Commons, saying it imposes “disproportionate controls on free expression”.

The government first announced the bill on 9 March. At that time, the Ministry of Justice and the Home Office said it would “strengthen police powers to tackle non-violent protests that have a significant disruptive effect on the public or on access to Parliament”.

The legislation will amend the 1986 Public Order Act, making it much easier for the police to impose conditions on both marches and static protests. The 1986 Act limits when conditions can be placed on assemblies to protests that:

may result in serious public disorder, serious damage to property or serious disruption to the life of the community

But the new bill gives the police power to impose:

such conditions as appear to the officer necessary to prevent the disorder, damage, disruption, impact or intimidation

The bill will give the police power to impose conditions on protests based on the amount of noise they make. This allows police to intervene in protests where “noise causes a significant impact on those in the vicinity or serious disruption to the running of an organisation”.

And the legislation also gives the home secretary the power, without parliamentary approval, to define “serious disruption” to communities. Police would then be able impose conditions using the definition.

Further amendments will make it easier for protestors to be convicted for not complying with conditions placed on protests, saying a person will be “guilty of an offence” if:

Crucially in this section is the loose wording “ought to know”. Under current legislation, the police have to prove that a person was aware of the conditions in order to secure a conviction.

The bill also expands sentencing powers for several offences. Damaging memorials will lead to a maximum ten year sentence, and the maximum penalty for assaulting an emergency worker, which includes police officers, will be doubled to two years.

Meanwhile, a new statutory offence of public nuisance will be created for actions causing:

serious harm to the public or a section of the public.

And the definition of “serious harm” includes actions that cause:

Anyone convicted of this offence faces up to ten years in jail.

The police would also obtain further powers to remove “unauthorised encampments”, as well as criminalising trespass and expanding stop-and-search powers.

One-person protests and protests near parliament that obstruct vehicle access could also be limited under the new laws.

Several civil rights groups have already spoken out against the bill. Gracie Bradley, Liberty director, said it would threaten protests, and put marginalised communities at risk through the expansion of stop and search powers and criminalising trespass. She said:

parts of this Bill will facilitate discrimination and undermine protest, which is the lifeblood of a healthy democracy. We should all be able to stand up for what we believe in, yet these proposals would give the police yet more powers to clamp down on protest. They risk stifling dissent and making it harder for us to hold the powerful to account.

The apparent excessive use of force by Met police officers is a stark and timely warning about precisely why Parliament must not allow yet more police powers to quash peaceful protest.

The proposals being rushed through put enormous and unprecedented powers in the hands of the state to effectively ban even peaceful protests. If that happens, scenes like those this weekend will become more common.

It is important we don’t forget that decades of criminal justice legislation had already created dozens of new offences and broad new powers that inevitably have since been reinterpreted and abused. As well as opposing this new bill, we need to start demanding a fundamental change in the policing of protests in Britain. This is why we today launched a new Charter for Freedom of Assembly Rights. We are demanding police respect existing international human rights standards – or explain why they refuse to do so.

Netpol’s petition for the National Police Chiefs Council to adopt a charter protecting the right to protest has already gained over 115,000 signatures.

Priti Patel has condemned protestors from Black Lives Matter and Extinction Rebellion previously and called for extended police powers to intervene in these protests.

Many were shocked by the police’s intervention at the vigil for Sarah Everard, though as many others have pointed out, police have intervened disproportionately in protests before.

This bill will erode the right to protest in the UK, making it harder to stand up to power even through non-violent protests. It will encourage the behaviour displayed by the police at the weekend and at recent protests for racial justice and environmental action. It is therefore imperative that we all take action to ensure it isn’t passed and to ensure that we all have the right to protest.