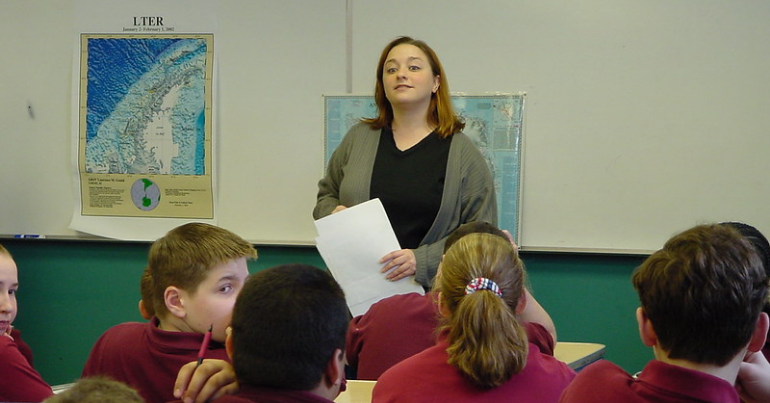 After over a year of disrupted learning, the already large disadvantage gap in UK education has blown apart.

As a result, educators and policy makers have been left scrambling for a solution to help less privileged pupils catch up with their peers.

Sir Kevan Collins, formerly in charge of education recovery plans, quit last week. He said the announced £1.4bn plan would be nowhere near enough to help pupils catch up.

However, instead of depriving pupils and teachers of their free time, it’s time to recognise the UK education system is deeply in need of reform.

The extra time would have been aimed at disadvantaged students who have been more impacted by the coronavirus (Covid-19) pandemic.

The government instead announced it would spend £1.4bn, giving young people up to 100m hours of free tuition.

The plans were widely denounced as completely insufficient, and Labour has promised to force a vote against them.

However, even plans that spend more money and take measures like extending the school day have their drawbacks.

According to a recent University of Cambridge study, extending school hours may have little effect on progress. The study analysed five years’ worth of data from nearly 3,000 schools. And it found that even “substantial” increases in learning time only saw minimal improvements.

Several education unions stated their opposition to Collins’ proposals. They said the government must consider the trade-offs of a longer school day.

The marginal gains that might be possible through extending the school day must be weighed against the costs of such a strategy, including the impact on pupils’ mental health, reduced family time and less time for extra-curricular activities.

The government could end up doing more harm than good by adding more classroom hours to children’s school day.

Similarly, sixth formers who spoke to BBC News said they’d rather just have some certainty than spend extra hours in the classroom.

While the pandemic has undoubtedly exacerbated inequality in schools, the problems go much further back. The gap between the richest and poorest A-Level students was at least three grades even before the pandemic began.

Furthermore, the Education Policy Institute (EPI) reported in 2018 that there was evidence the school system had become “less equitable” since 2010. Its analysis of Ofsted data found that schools which were performing better were less likely to admit disadvantaged pupils.

Meanwhile, teachers and pupils are increasingly likely to report that their workload is harming their mental health and wellbeing.

As such, unions are arguing its time for change. In Scotland, the NASUWT has called upon its new education secretary to take the opportunity for reform.

The Covid crisis and the associated fallout around assessment and qualifications has emphasised the fault lines that have grown in the education system in Scotland.

… we have seen an increase in assessment of pupils which has driven teaching to the test, swamping teachers in increasing bureaucracy and workload and putting pupils under additional stress.

The reliance on standardised testing and performance metrics is creating an unequal education system that overworks both students and teachers. The UK system relies on a narrow curriculum that forces teaching to test and examines a very small range of ability in pupils.

There are, however, alternative approaches. In Estonia, children rank above English pupils in both science and reading. Yet Estonia’s primary schools avoid the formal testing the UK does, instead focusing on making children “school-ready”.

In Finland, children are consistently at the top for worldwide reading and maths scores. However, standardised tests are a rarity in Finnish schools until the final years of education. According to an OECD survey, Finland has the smallest gaps in the world between its strongest and weakest students.

Finnish teachers emphasise that their education system isn’t about learning to take a test. Moreover, homework is minimal and children aren’t rushed into school before they’re ready.

The UK has a much larger reliance on compulsory national curriculum testing than many other countries. The overemphasis on test results and school rankings creates a system where disadvantaged students are more likely to become concentrated in less ‘desirable’ schools.

As such, this education recovery could be the opportunity to scale back our dependence on constant standardised testing and instead focus on improving pupils’ learning habits.

Relaxing the rigidity of the national curriculum would allow teachers to tailor their classes to their pupils, assessing and encouraging progress in ways that don’t just involve learning how to answer an exam paper.

Not constantly publishing testing data could help to slow the system where some schools become ‘undesirable’, and therefore unattended by privileged pupils.

Looking at the success of other countries, it’s obvious our education system is wildly imperfect. Instead of extending school hours and tutoring for a system that was already perpetuating inequality, this is the time for real change.