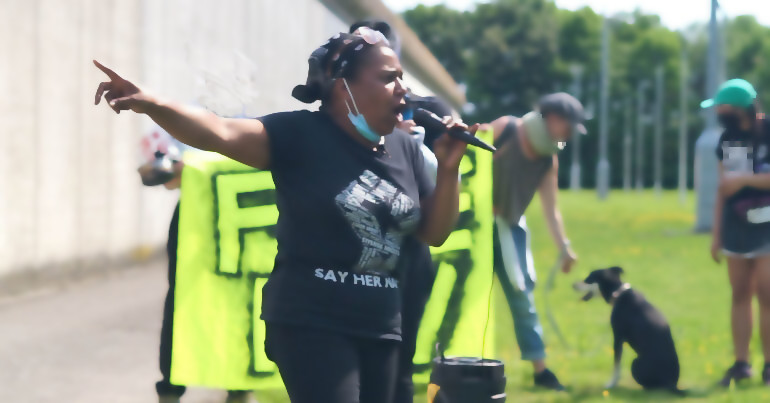 People from all over the UK descended on HMP Full Sutton in Yorkshire at the weekend in what campaigners called a “historic demonstration”. The protest was the biggest of its kind ever to be held at the prison, and it took place in solidarity with imprisoned men of colour Kevan Thakrar and Dwayne Fulgence.

The protesters are demanding an end to racist violence towards the men. They’re also calling for the abolition of a planned 1,440-bed ‘mega prison’ on the site.

Prisoners cheered from inside the walls as protesters circled the prison, making noise and speeches in solidarity with those incarcerated.

Thakrar has been imprisoned for more than 13 years. 11 of these have been spent in the UK’s brutal Close Supervision Centres, restricted to his cell for 23 or more hours per day. According to Community Action on Prison Expansion (CAPE), CSCs are:

‘prisons within prisons’, the UK equivalent of the USA’s ‘Supermax’ prisons. They are the highest security and most repressive prison units within the country, where prisoners are held in solitary confinement in an extremely controlled environment for long periods of time.

Thakrar was placed in the CSC system after he defended himself against a racist attack by prison guards in 2010. Sisters Uncut Leeds and CAPE are demanding that Thakrar is immediately transferred to a safer prison to save him from racist violence from both prison staff and other prisoners. In 2019, he was also stabbed four times by a known racist in HMP Full Sutton.

Dwayne Fulgence is a Black Muslim man, also held in segregation in Full Sutton. According to campaigners, Fulgence was brutally beaten by four white officers in racist attack on 22nd April. He was denied any medical assistance as well as access to a lawyer.

On 10 March 2021, Nils Melzer, the United Nations Special Rapporteur on torture and other cruel, inhuman or degrading treatment or punishment, wrote:

we express our grave concern at the indefinite and prolonged detention of Mr. Thakrar in what appears to be conditions of solitary confinement. Both in this individual case and in terms of general policy, we are particularly concerned at the reported use of prolonged or indefinite solitary confinement in Close Supervision Centers, thus predictably inflicting severe pain or suffering amounting to cruel, inhuman and degrading treatment or punishment, or even torture.

And in May 2021, the UN released a statement expressing concern that UK prisons currently receive an extra £100k annually per inmate for each person held in solitary confinement. Melzer said:

I am seriously concerned that this creates a misguided financial incentive for sending prisoners to CSCs and keeping them there, and it casts doubt on the claim that these decisions are based exclusively on an individualized risk assessment.

The Canary’s Tom Anderson believes that Thakrar is being brutally treated because of his vocal resistance to prison conditions. Anderson wrote:

Thakrar has been a long term and vocal critic of the CSC system, so it’s hardly surprising that he’s being singled out for further punishment. He told a friend on the phone that he believes the move to segregate him is a retaliation by the authorities for his resistance to prison conditions.

Throughout his sentence, Thakrar has also made consistent complaints against the prison authorities, as well as working with support groups on the outside such as the Anarchist Black Cross and Prisoner Solidarity Network.

Among the protesters standing outside HMP Full Sutton was the mother of Siyanda Mngaza. Mngaza was sentenced to prison for four and a half years after she was racially attacked in Wales in 2019.

Mngaza is just 4ft 10″ tall and was badly injured by three people, two of them men twice her age. According to the campaign Free Siyanda, none of her attackers were taken into custody or arrested. Instead, Mngaza was convicted of grievous bodily harm and sentenced.

Protesters also descended on the prison to make it clear that they don’t want the government’s planned new ‘mega prisons’. The state plans to create more than 10,000 new prison places nationally – known as the Prison Estates Transformation Programme. And 1,440 of those spaces will be built at the site of Full Sutton prison.

As we see from the horrific racist attacks experienced by Kev and Dwayne, prisons are not the answer to serious violence in our society – they instead create more violence. The planned mega prison at Full Sutton means throwing more money at violence against people from marginalised communities at a time when essential domestic violence services are critically underfunded and austerity has deprived our communities for over a decade.

The Ministry of Justice cares more about profiting from the cheap labour of prisoners than they do about protecting people from harm and poverty. We demand an end to the Prison Estates Transformation Programme now. We want investment in services that help people rather than harm people!

Protests will continue until the government listens

In May, UN expert Melzer announced that he had raised concerns about the CSC system directly with the British government, “and regrettably, so far, the United Kingdom has not provided any response.” Melzer said he will continue to “monitor the situation”.

In the meantime, campaigners will continue raise their voices. For Kevan Thakrar, for Dwayne Fulgence, for Siyanda Mngaza, and for all those incarcerated.