Hundreds of us trespassed on land this weekend. We won't stop until we reclaim our right to roam. - Canary 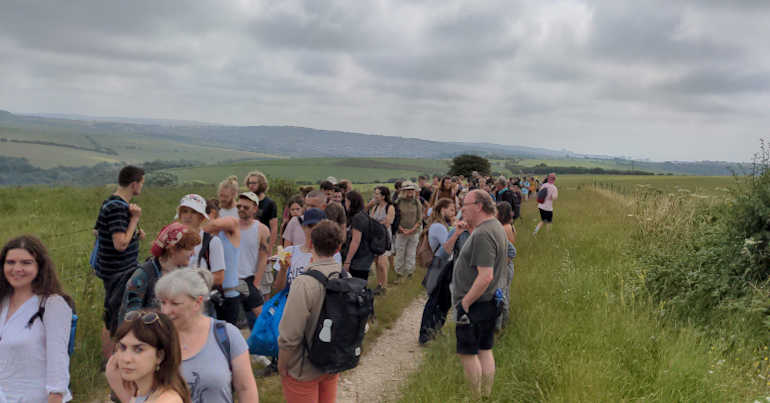 “How many of you knew that this place existed?” a man called Dave Bangs says to a 300-strong crowd. I look around and see two hands up. Most people here are locals, but have never been to this beautiful little haven of nature, just a couple of miles from Brighton city centre.

We are taking part in a mass trespass, organised by Landscapes of Freedom, a coalition of ‘free walkers’ fighting for our right to roam in England, in collaboration with the national Right to Roam campaign.

The trespass is happening in a place called Pangdean Bottom, which has been out of bounds to the people of Brighton since its public purchase by Brighton Council in 1924. In fact, two-thirds of Brighton’s downland is in public and social ownership and yet the vast majority is closed off from the public.

So why, exactly, have we all felt the need to join the trespass? When you look at the statistics, it should be obvious. 92% of land in England is off-limits to normal people. The land-owning elite keeps us out with barbed wire and ‘KEEP OUT’ signs, designed to intimidate us and make us feel like we’re criminals. It is even more shocking to learn that Brighton and Hove council, who should be acting for the public, are complicit in keeping us out. By trespassing, we’re reclaiming what is rightfully ours.

Guy Shrubsole, author of Who Owns England?, explains to me:

I think it is really important that we are trespassing today because we only have a right to roam over 8% of England. Even on this land, which is owned by Brighton council, there’s not a right for the public to access it. That needs to change. We need to have a greater right to roam, to reconnect with nature. Lockdown has shown how important it is that people have access to nature on their doorstep. And for the people of Brighton not to have access to this amazing downland is just really shocking.

Brighton council could change that tomorrow if they wanted to. They could give a full right to roam on all the 10-15,000 acres of the downland they own. They’re reviewing the future of the downland estate now, and it’s exactly what they could do if they decided that they want public land to be used for the greater public good.

“We need to be in nature in order to defend nature”

For those of us who are excluded from the land, we can’t protect what we had no connection with – or even clapped eyes on – in the first place.

Andrea Brock, who is part of Landscapes of Freedom, argues that we can only defend nature if we are not excluded from it. She says:

We are part of nature. We shouldn’t be separate from nature; in fact we need to be in nature in order to defend nature: to see the destruction going on and to stop that destruction. To learn about the ecocide that’s happening really close to us that we weren’t aware of and therefore weren’t stopping.

We always talk about how indigenous communities are defending their land, and we always look at really far away places. We don’t necessarily make the connection that we should be doing the same thing here, rather than just being in solidarity with people in the Amazon, for instance. 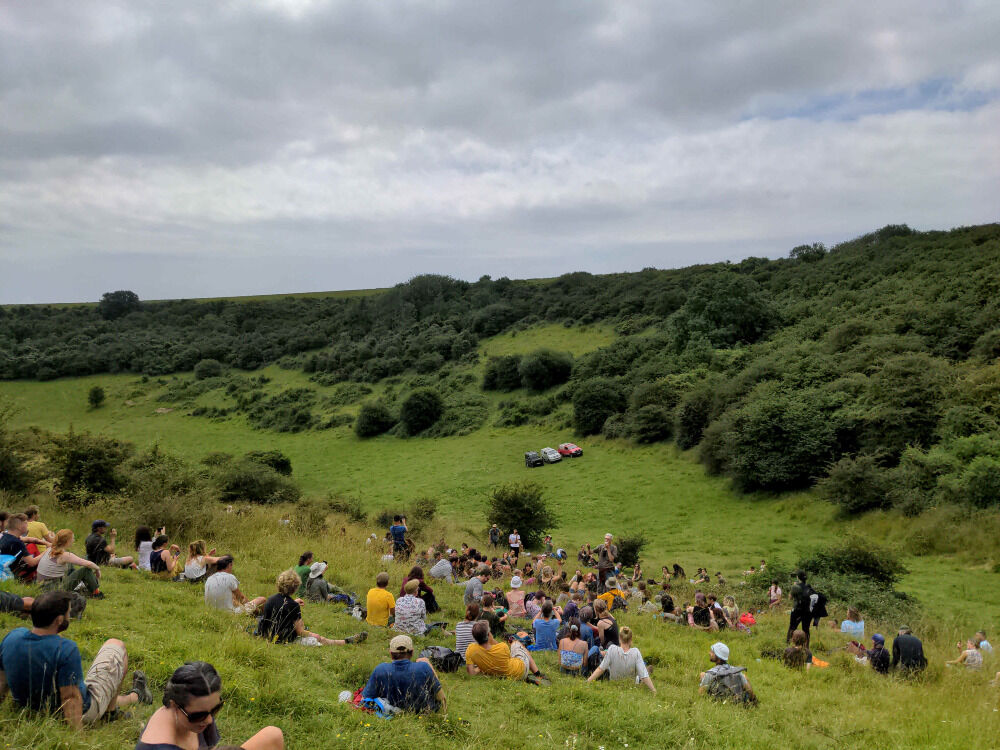 There’s a classist narrative that if the masses are given access to land, they will trash it. The mainstream press often backs this up, gleefully running stories that the working classes and Traveller communities leave mountains of litter, and even human faeces, when given the right to roam. This complicity by the media gives land owners the justification they need to continue to keep us out. And it makes it easier for the government to pass racist laws around trespass, such as the Policing Bill, which will make it a criminal offence to trespass with the intention to reside in or near a vehicle.

But Shrubsole explains that it isn’t the public, or the Traveller community, who are the problem:

I think a lot of people think that if the public have access to the countryside they’re going to damage it. But many of the land owners are damaging the countryside through [doing] things like introducing millions of pheasants into it every year, and that’s killing the adders, killing the other species in the ecosystem.

Indeed, the very land that 300 of us are trespassing on is being used as a pheasant shoot. As the crowd approaches the pheasant pen, the farmers, accompanied by the police, drive up to us hurriedly in their 4X4s.

After the trespass, I speak to Quinn, a hunt saboteur who tries to stop blood sports. He tells me exactly how the farmer uses the land:

Brighton and Hove council leases the land to a man called David Gorringe, who hosts shoots. The shoot itself is owned by a man called Steven Attwood, who runs shoots across the south-east in Sussex and Kent. There’s a few cover crops on the land to create breeding grounds for game birds. It’s essentially a whole valley in the South Downs which people don’t have access to, and which has barely any use beyond blood sports throughout the shooting season. There’s a lot of money to be made from lucrative shooting sports.

Shrubsole explains to me the absurdity of pheasant shooting in this country:

We release 50 million pheasants into the British countryside every year – almost the same number of pheasants as there are people in this country! So maybe we should take a little bit less land for pheasants, and more for the public.

A very small number of people enjoy pheasant shooting. It’s not quite as elitist as shooting on grouse moors, but it’s not something that people need to do. You end up with pictures in the press of piles of pheasant carcasses being thrown away after shoots. It’s gotten out of control and it’s starting to have a big impact on the eco system.

The trespasses will continue

As the trespass ends and the hundreds-strong crowd goes their separate ways, it’s clear to me that mass trespasses like this will continue, both in Brighton and across the country. We are sick and tired of being told that we have no rights to the very nature that we belong to.

Kim Turner, an activist with Landscapes of Freedom, tells me:

We are trespassing for the love of the land and for the love of all those who dwell and grow there. We used to say “this land is our land” to claim it from the elites and give everyone some land to grow. But that is not correct; this land is not anyone’s land.

We’ve been fenced off from this beautiful land for far too long, by history of violence, ejection and exclusion. We are told to keep to public rights of way – to merely look at the land – not to walk on it, enjoy it, know it or love it. This most basic aspect of human life has been wrenched from us, yet we collectively yearn for it, seek it, need it.

It is exactly this yearning that will see us coming back to trespass more. Exclusion from land most affects working class people, BAME people, traveller communities and those with disabilities. And we are all uniting to fight together for our most basic of freedoms: to roam our land.