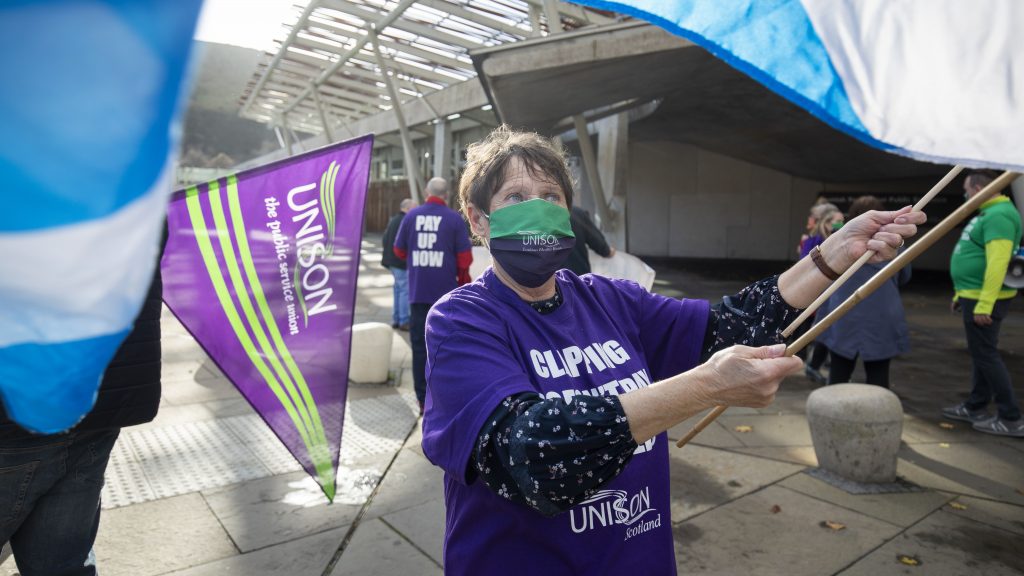 One of the UK’s largest trade unions is asking its NHS members if they want to accept a pay rise offered by the government, or oppose it and take industrial action.

Unison has started a consultation into the proposed 3% pay rise for NHS staff announced by the government last week.

The union has said the award does not “meet the real living wage of £9.50 per hour for the lowest paid health service workers” and claimed it widens the gap between those at the top and bottom of the pay scale.

Unison head of health Sara Gorton said: “All health staff deserve equal recognition for their contribution to the NHS and their efforts during the pandemic.

“But the pay review body’s 3% recommendation means thousands still won’t be on the real living wage.

“Missing the living wage target by 1.5p per hour shows the Government ignored the lowest paid, for all the Prime Minister’s talk of levelling up.

“It’s vital staff give their views straight away.

“Ministers won’t wait to hear what health workers think before they begin paying the new rates.”

She added: “With this pay review process, it isn’t enough just to register disapproval.

“If staff want to challenge this outcome, they need to take part in this consultation and show there’s widespread support for industrial action.”

Unison will begin consulting NHS workers this Friday on whether they accept the rise, or oppose it and are “prepared to take industrial action”.

The union says more than 300,000 people will be asked for their views on the pay rise, with the consultation closing on September 10.

Nurses, paramedics, consultants, dentists and salaried GPs come under the new pay deal, which is three times higher than the government’s initial 1% offer.

Other members of staff including junior doctors will not be offered the new deal.

The rise, thought to cost £2.2 billion, will come out of the existing health service budget.

Unison had instead called for an across-the-board £2,000 pay increase for all NHS staff, which it says “would have ensured the pay gap and inequalities would not have widened further”.

The union also said the pay announcement means the NHS has “failed to regain its position alongside the UK’s 8,000 living wage employers”, as the lowest pay rate falls just 1.5p per hour short of the minimum requirement.

The British Medical Association launched a similar consultation for senior hospital doctors on Monday, and the Royal College of Nursing plans to hold demonstrations this summer demanding “fair pay”.