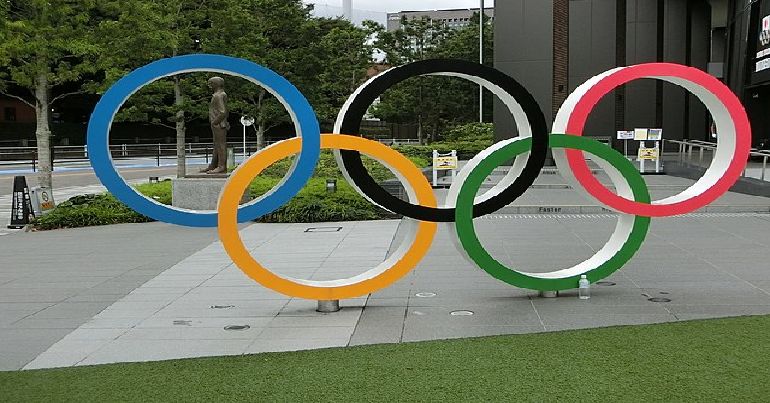 The Olympics are currently underway in Japan, and politicians and the mainstream media are busy celebrating Team GB’s gold medals.

However, there is precious little coverage of the protests being held against the Tokyo Olympics.

Japan’s anti-Olympics movement has been called ‘anti-Japan’ by some on the right, and has been criticised by Japan’s right-wing ex-prime minister Shinzo Abe. But why are people really opposing the Olympics?

As usual, the Olympic roadshow has led to gentrification and social cleansing. Homeless people have been evicted from the area around the Olympic stadium. Japanese campaigners tweeted:

At Yokohama Stadium that hosts Olympic softball games, the organizers shut down the surrounding parks and roads, and evicted unhoused people who had been living around the stadium.

The Olympics has been such murderous games. Defend life. Cancel the Olympics now. https://t.co/k5HBUs3SVO

Making people homeless because of a ‘shortage’ of hotels

Wherever the Olympics go, gentrification goes too. Last year, hundreds protested in Tokyo’s Shinjuku district over evictions from state supported housing to make way for infrastructure for the games (the 2020 games were eventually postponed because of the coronavirus pandemic).

In the US – due to host the games in 2028 – people are already struggling against evictions in Los Angeles, which are being planned to make up for a supposed ‘hotel shortage’ ahead of the LA Olympics.

One US opponent of the LA Olympics visited Tokyo last year and wrote about the effects of the construction ahead of the Olympics in Tokyo:

we see a familiar site: a hostile [planner], being used to discourage houseless people from sleeping here.

They concluded that the gentrification caused by the Olympics was “pure class hostility”:

This is pure class hostility and a tactic we’ve seen deployed throughout Los Angeles, from Koreatown to Venice.

Anti-Olympics protests have been met with police violence. One female protester was wrestled to the ground. One commentator tweeted:

Police violently removed the protesters at #OlympicTorchRelay event who were in the public space, told them that they were on the premises of the Olympic Committee.
Female officers grabbed one of the protestors from behind, made her fall on the ground.#OlympicPolicing #ACAB https://t.co/a2svbEU3Mj

The games are like a microcosm of global capitalism – where people are evicted to make way for expensive hotels for those attending the games, and dissent is not tolerated. Anti-Olympics protesters have reportedly been prevented from marching on a public road:

#OlympicPolicing
The IOCs are staying at a 5★ hotel rumored to cost ￥3million a night. The police even prevented the protesters from walking on the public roads around the hotel, claiming that the protest was against the national interest. Report thread with maps. 2021.7.10 https://t.co/QvmaWF2RnD

Repression of dissent is present both outside and inside the Olympic stadium. The International Olympics Committee has only just relaxed a rule placing a ban on protests by Olympic athletes. However, political gestures from the podium – like the famous Black power salutes at the Mexico Olympics in 1968 – are still banned.

The Canary spoke to one woman who has been participating in the protests in Yokohama to ask why she was demonstrating. She explained:

There are many reasons but for me the first reason is gentrification. They evicted homeless people and poor people.

‘Save lives, not the Olympics’

Many people are worried that the games will lead to a spike in coronavirus (Covid-19) cases. Fears appear to be coming true, as cases in Tokyo have risen by 149% during the first week of the games. Anti-Olympic campaigners tweeted:

A record number of 2,848 people were newly infected with COVID19 in Tokyo today. What we feared is coming true.
Save lives, not the #Olympics. We don't want to be killed by the #OlympicGames#NOlympicsAnywhere
東京都で新たに2848人感染 過去最多 | 毎日新聞 https://t.co/1z1joqDPWm

Speaking about the increase in cases, public health expert professor Kenji Shibuya said that while the rise in cases wasn’t just down to the Olympics, it “definitely it is one of the factors.” Shibuya further stated:

With that figure today, people will see the reality again and I think people should be getting more serious about what to do.

So, is there an alternative to the inequality and oppression caused by the Olympic Games? Campaign group No Olympics LA discusses resistance to the games and the history of radical alternatives:

Resistance to the Olympics is almost as old as the Games themselves, and the Left features prominently in this history. The Olympics have been exploiting bodies and communities for over a hundred years, and opposition to the Olympics, taking various forms, has been a near constant.

A lot can be learnt from the radical alternative Olympics organised in the first half of the twentieth century. According to No Olympics LA:

Leftist alternatives to the Olympics proliferated in the first half of the twentieth century. In the 1910s the Worker Sports Movement was launched by the Socialist Workers’ Sport International in Lausanne, also headquarters of the IOC itself. The first Workers Sports Olympiad was held in 1925 in Frankfurt; the second was in Vienna in 1931. This alternative vision treated sport as actual amateurism, instead of the profit, cut-throat competition, and nationalism that define the Olympics. Communists in Chicago and Barcelona launched their own alternatives as well. But like the Olympics themselves, progress of the alternative vision was interrupted by the World Wars

The rise of these alternatives to the games also occurred in the context of the era of state socialism, which proved to be just as dominating and oppressive as capitalist states could be. Many of the alternative workers’ sporting movements struggled with the Soviet Union’s Sport International – or SportIntern – which tried to dominate workers’ movements for an alternative to the Olympics.

Wherever the Olympic games go, they bring with them damaging corporate takeovers of cities which benefit the rich while displacing the poor. Public dissent against the games is stamped out by police violence. If we are going to successfully resist the Olympic roadshow, we need to work transnationally – both to resist the oppression caused by the games and to create truly grassroots alternatives.