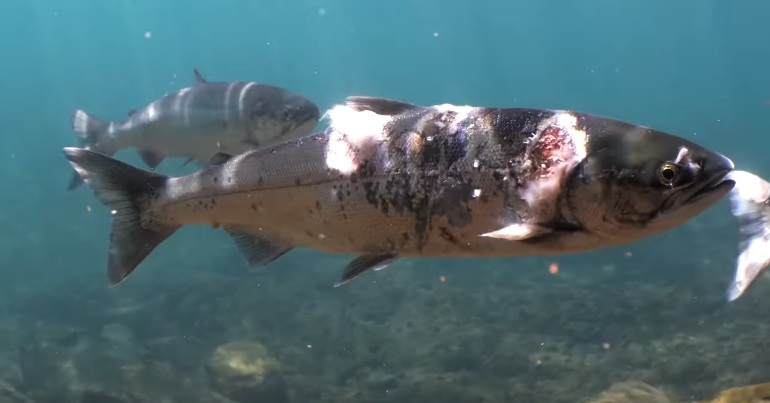 Record-shattering heatwaves have hit the northern hemisphere over recent weeks. Now, a newly-released video has brought the impact of that baking heat into sharp and distressing focus. It paints a horrifying picture of the world’s near future.

The clip shows salmon swimming in a river in Washington State covered in lesions and fungus. The non-profit organisation Columbia Riverkeeper, which released the footage, says the salmon were ‘dying from the hot water’ and that their injuries are a result of heat-stress.

The organisation’s executive director, Brett VandenHeuvel, said that the salmon had been swimming upstream in the Columbia River when they veered off to the Little White Salmon River, where the footage was recorded on 16 July. VandenHeuvel described the fishes’ change of course as an attempt to “escape a burning building”.

On 27 July, the group said that the river temperature is currently over 21C (71F). That temperature is above the legal limit of 20C (68F) for the river set in the Clean Water Act, a threshold that scientists have put in place to “protect salmon from unsafe temperatures”.

A marine biologist from the University of British Columbia, Christopher Harley, has also warned that the heatwave could have killed over one billion marine animals on the Pacific coast in Canada.

Columbia Riverkeeper asserted that the climate crisis is partly responsible for the salmons’ horrific predicament. But it also said river dams that “create unnaturally hot water due to huge stagnant reservoirs” are to blame.

As the Northwest Tribal Salmon Alliance’s Don Sampson explained in a further video, sockeye salmon are currently returning from the ocean to “their beautiful home” to reproduce. However, he asserted that the reservoirs are “stagnant cesspools that are heating up and killing” them. The salmon are “suffocating” and “weakened” as a result, he said.

Sampson argued that removing the dams and creating a free-flowing river again would ease the situation. He concluded:

We need people to wake up to see what it is – how important they are not only to indigenous people but all people on this Earth.

The footage appears to have hit a nerve, with a number of people responding to it on social media:

Salmon nearly roasted alive in Pacific northwest heatwave
“It’s heartbreaking to watch animals dying unnaturally & worse, thinking about the cause – it’s a human caused problem”#ClimateEmergency
We are killing ourselves & all life on Earth
Utter #madnesshttps://t.co/hR8bg1PaC8

This is horrific 😱 overheated waterways, #ClimateCrisis #hightemperature baking the salmon in their natural #environment https://t.co/2mLXc5Vwmn

The Green Party’s Natalie Bennett noted that the situation is a reminder of how closely tied the climate and biodiversity crises are:

The UN highlighted this interconnectedness in June, producing a report on the importance of tackling these two crises together. As co-chair of a UN Scientific Steering Committee, professor Hans-Otto Pörtner commented:

Human-caused climate change is increasingly threatening nature and its contributions to people, including its ability to help mitigate climate change. The warmer the world gets, the less food, drinking water and other key contributions nature can make to our lives, in many regions

In short, the tragedy unfolding in the Columbia River shows the sort of horrors people around the world could witness in the near future without concerted global action. So governments and regional authorities must get serious about addressing these interconnected crises because time is running out.