New billboard campaign calls for end to the monarchy - Canary 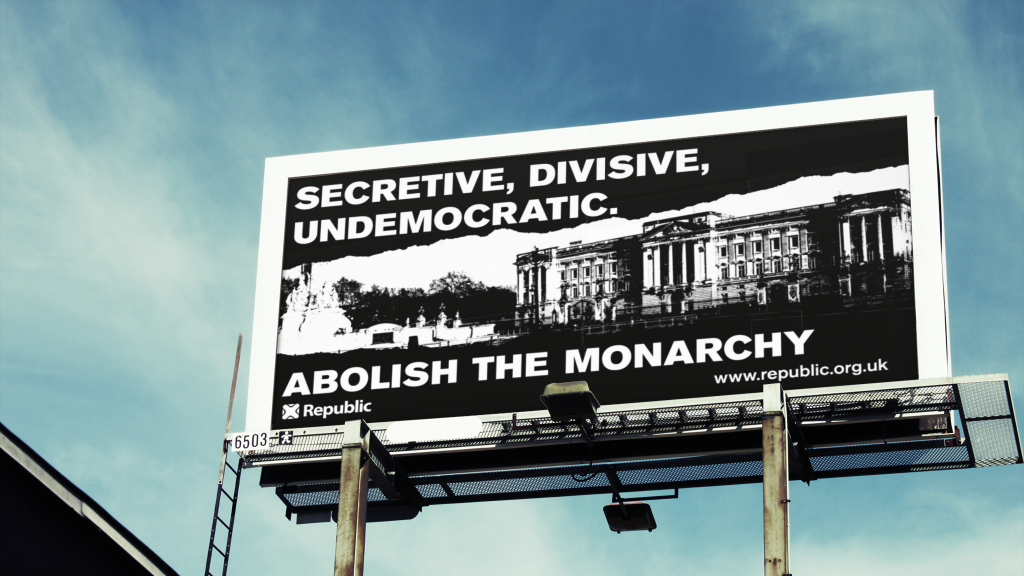 Anti-monarchy activists have launched a new billboard campaign calling for the abolition of the monarchy.

The pressure group Republic has stepped up its drive to encourage the UK to back an elected head of state instead of a sovereign.

Raising more than £16,000 through crowdfunding so far, Republic has commissioned 12 billboards which are going up this week, with a further 15 planned for September and more to follow.

The first batch will be seen in Portsmouth, Birmingham, Stoke-on-Trent, Manchester, Leeds, Newcastle, Glasgow and Aberdeen, and feature the message: “Secretive, Divisive, Undemocratic. Abolish the Monarchy.”

Billboards will also appear in Cardiff, Swansea, Bristol and London later in the year.

Graham Smith, chief executive of Republic, said: “The monarchy is wrong in principle, wrong in practice and it’s bad for British politics. That’s the message we want the country to hear.”

Smith said polls showed young people were in favour of an elected head of state, and that the succession of the Prince of Wales to the throne would be a major turning point for the growth of the country’s republican movement.

“The Queen is the monarchy, the monarchy is the Queen. King Charles may inherit the throne, but he won’t inherit the respect and deference enjoyed by his mother,” Smith said.

He added: “We have been campaigning for the abolition of the monarchy for a long time but now we are at a crossroads.

“As the Queen’s reign draws to an end, it is time to demand a say in who should be our head of state.

“Historians have said the monarchy is more secretive than MI5 and the CIA.

“It is more divisive now than ever, with a widening gap in levels of support between young and old.

“And clearly when we’re being told we’ll have no say in who our head of state is, the monarchy is undemocratic.”