Revealed: the amendments to the policing bill that will chill you to the bone - Canary 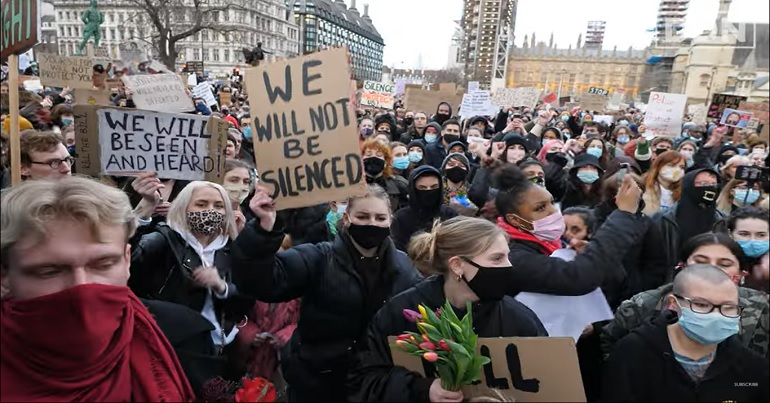 The Police, Crime, Sentencing and Courts Bill – known as the policing bill – was already a vicious, repressive and racist piece of legislation. It sparked massive protests across the country, including the uprisings in Bristol that have led to 42 people facing serious charges.

As The Canary reported in October, home secretary Priti Patel announced plans at the Conservative party conference to make the bill even worse. This included measures to increase the penalty for highway obstruction from a fine to up to six months imprisonment.

Now amendments to the bill, currently in the House of Lords, have been published. And worryingly these amendments seem to go even further than the fascistic proposals Patel first announced. There are even provisions to ban internet use for some protesters.

While amendments to bills in the Lords can be ten a penny, these are from baroness Williams of Trafford. Williams is one of the sponsors of the bill and a Home Office minister – so these amendments are therefore likely to make it through to the legislation.

The six months in jail for highway obstruction have been increased to 51 weeks [the legislation to increase the maximum sentence for all summary offences from six months to 51 weeks has been passed but not yet enacted]. And there are also proposals for a new offence of “locking on” and “being equipped for locking on”. ‘Locking on’ is when protesters attach themselves to an object or each other to make it difficult for the police to move them. Again, this will be punishable by up to 51 weeks in prison. If this wasn’t bad enough, there are also proposals for a new stop and search power for anything to lock on with. Even more worryingly, there are provisions for this search power to be used without suspicion. This means the cops can just stop and search anyone they believe might be associated with a protest without needing a reasonable suspicion that they’ve done, or intend to do, anything illegal.

Yet further powers, presumably aimed at people like the HS2 protesters who have dared to challenge the government’s building of an ecologically destructive and costly train line, criminalise anyone who obstructs “major transport works”. And again, dare to sit in front of bulldozer ripping down a tree for a new road, and you could face up to a 51 weeks in prison.

I’m an activist as well as a journalist. As I’ve previously written, there are times when there’s a need to leave my press badge at home and take action. Over the last 25 years, amongst other things, I’ve obstructed countless roads, blocked trains carrying delegates to an arms fair, and locked on to various objects outside military bases. Altogether, if the policing bill had been enacted, I could have spent decades in prison for the crime of protesting.

But where this legislation fails in its purpose is that it also wouldn’t have made a difference to the actions that I took and am prepared to take in the future. As I wrote after I was arrested at protests against the London arms fair when my child was six:

What right do I have to say fuck you to those mothers? The mothers who have just seen their beautiful toddlers blown to pieces by a British made bomb. Do I say sorry love, but I’ve got a kid now, or do I extend my solidarity to mothers everywhere? Do I evaluate the risks I am taking as being petty compared to what other mothers face on a daily basis? Do I do everything I can to fight the companies and individuals who make money selling these bombs?

I’ve always known I could be arrested and face jail time for the actions that I’ve taken. But although I’ve tried to avoid it, albeit unsuccessfully at times, the threat of prison hasn’t stopped me taking action. Because when you’re trying to stop the arms trade, or the climate crisis, for example, the risk of not taking action is too great. In other words, more people might get locked up, but it won’t stop people taking action. The threat of prison hasn’t, for example, stopped the Insulate Britain protesters imprisoned for breaching the injunction against them.

One of the most worrying powers contained in the amendments are serious disruption prevention orders. These orders can be imposed against people who’ve been convicted of two or more protest-related offences that have caused “serious disruption” to “two or more individuals, or to an organisation”. For organisation, read corporation.

Under these orders, a person can be required to report somewhere on particular days, presumably to a police station. They can also ban people from going to certain places, associating with named people, or taking part in particular events. They can also prohibit someone using the internet to “facilitate or encourage” someone to commit a “protest-related offence” or to “carry out activities related to a protest that result in, or are likely to result in, serious disruption to two or more individuals, or to an organisation”.

Put simply, these orders will effectively ban people from organising protests – especially when the threshold of two or more people is so frighteningly low. The orders can last up to two years and, if breached, are punishable by up to 51 weeks in prison.

We cannot let these amendments go through without challenge. Kill the Bill groups across the country have done amazing work in focusing public attention on the initial bill. We now need to up the game and get people talking again. This is the biggest threat to our civil liberties in generations. It will give the state unprecedented power to lock up and control those who disagree with it. It’s a bill that was already a dictator’s wet dream even before these amendments were added.

The time for action is now. If we delay, the harsh reality for many of us is that our political organising will take place behind prison bars. We cannot allow this to happen.