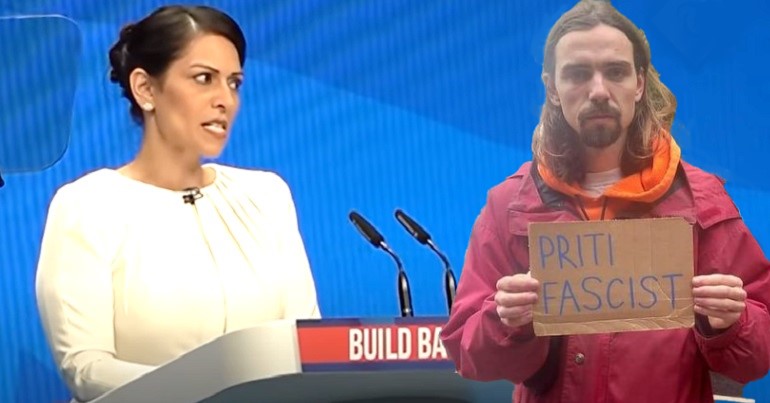 The police have sparked fury after arresting a protester for holding up a sign outside the Tory Party conference. Clearly you can now be nicked for telling the truth.

Greater Manchester Police (GMP) caused the uproar after they arrested a peaceful protester. Liam Geary Baulch was outside the Tory Party conference at the time. He was holding up a sign. It read “Priti Fascist”; not an unclever play on words. Seeing it, the cops soon swung into action. The Network for Police Monitoring (Netpol) tweeted the details of the incident:

A protester standing outside Conservative Party conference in Manchester with a handmade sign reading "Priti Fascist", during the Home Secretary's speech to delegates, was arrested and bundled into a police van.

As it noted, GMP then “dearrested” him. But Netpol asked how the force justified “this fundamental denial of rights to freedom of expression and assembly”:

He was subsequently "dearrested" but how on earth does @gmpolice justify this fundamental denial of rights to freedom of expression and assembly? #PritiFascist pic.twitter.com/TTu5sWou7e

The Canary was also interested in how GMP justified its actions. We asked them for comment. A spokesperson told us:

A man was behaving aggressively towards an officer at around 11:30am… [on Tuesday 5 October] on Peter Street, when another officer intervened, and requested he step back multiple times.

A 28-year-old man was arrested to prevent further breach of the peace, and was given the option of being taken into custody, or leaving the area peacefully.

The man chose the latter, and was de-arrested a short time later.

Within 30 seconds of holding this sign outside the Conservative party conference it was confiscated by Manchester police for “offensive language”. When I asked to have my property back, I was arrested for breach of the peace.

As Priti Patel laid out her crackdown on protest inside, I was in the back of a van for simply standing alone with a piece of cardboard. If anything I’m more convinced now that this sign is the truth.

Of course, some people on social media pointed out the worrying overtones of the story:

Dirty cops arresting a man for "offensive language" for holding a little sign with the words #PritiFascist is the definition of fascism. Talk about proving him right. https://t.co/poDLhpkUBQ

He was not disturbing the peace, there was not a noisy (or even a quiet) crowd. Silent protest. He was just holding a sign that was critical of the Home Secretary. Not being able to criticise the government looks a lot like fascism to me. #PritiFascist https://t.co/aAfNjx1ok0

They’re not wrong. Because as The Canary‘s Eliza Egret recently wrote, Patel and her Tory colleagues are further cracking down on protest.

This is part of the Police, Crime, Sentencing and Courts bill (also known as the ‘police bill’). Egret noted that Patel:

will seek to introduce a six-month custodial sentence, unlimited fines – or both – for obstructing a public highway. The current maximum punishment is a £1,000 fine.

Netpol noted even more new powers Patel is trying to give the police. These include using stop and search powers to look for lock-on kits; equipment that protesters use to chain themselves to things. Also in her sights are regular protesters. Netpol said that Patel wants to bring in new “Criminal Disruption Prevention Orders”. It said that these will be:

A descent into modern fascism

All this is on top of the other contentious measures in the police bill. This includes racist provisions that will target Black people and the Gypsy, Roma and Traveller (GRT) community. It will also clamp down on our rights to protest, to roam, and to take strike action. Amnesty said of the bill:

And this is without Patel’s toxic views on other issues like immigration. As one social media user summed up:

Priti Patel is truly terrifying. ‘Turn back the boats' she says to bouts of hesitant applause. As the insightful Hannah Arendt once said “the greatest evil perpetrated, is the evil committed by nobodies. That is by human beings who refuse to be persons.”pic.twitter.com/30aKKkJqBw

As The Canary has repeatedly argued, the Tory Party could be considered to be enacting a form of modern fascism. Now that pointing out this obvious truth can have you arrested, the UK’s descent into this dangerous ideology seems undeniable.