Kill the Bill: protests happening again across the country - Canary 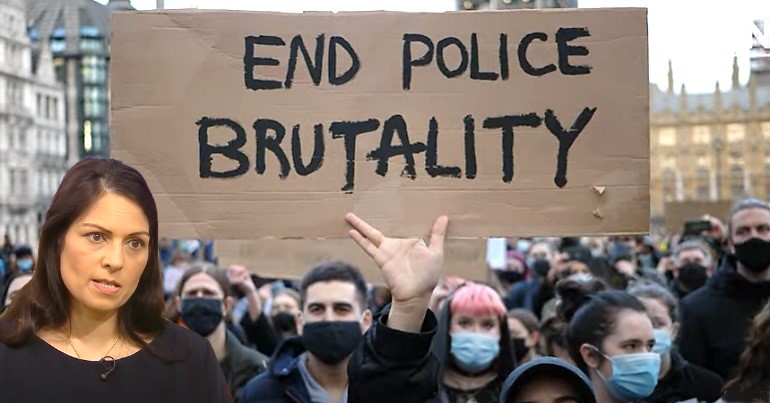 Correction: this article was updated on 23 August at 14:45 to clarify that the report into the Kill the Bill protests was published by an All Party Parliamentary Group and was not a commissioned parliamentary report.

People will be back protesting to ‘Kill the Bill’ this weekend. It’s over Priti Patel’s authoritarian and regressive Police, Crime, Sentencing and Courts Bill (the Police Bill). The demos come against a backdrop of imprisonments and growing anger. So, boots on the ground over this noxious legislation are needed more than ever.

The Police Bill has caused uproar. Many see it as racist against Black people and the Gypsy, Roma and Traveller (GRT) community. It will also clamp down on our rights to protest, to roam, and to take strike action. Amnesty said of the bill:

This year, there have been numerous protests against the bill. #KillTheBill protests in Bristol were marred by police violence. As Sophia Purdy-Moore reported for The Canary, a report from an All Party Parliamentary Group found that:

The report confirms that Avon & Somerset Police “failed to distinguish between violent and peaceful protestors, leading to the use of force in unjustified situations”.

That isn’t stopping the Police Bill going through parliament. It passed and is now at the second reading stage in the House of Lords. Meanwhile, the state has been punishing people for protesting over this threat to their basic rights.

On Friday 30 July, five [Bristol] Kill the Bill protesters were collectively sentenced to over 14 years in jail… They received sentences ranging from 3 years and 3 months to 3 years and 11 months.

The judge accused protesters of ‘dehumanising’ the police. Apple noted this was the same authoritarian language used by Patel. She also wrote that:

But it wasn’t those protesting on the streets of Bristol who were guilty of dehumanisation – it was the police. They attacked people indiscriminately… between 21 and 26 March, the police injured at least 62 protesters. Meanwhile, the police lied about injured officers.

Despite the risk to their safety, people are still determined to see the bill killed.

Hit the streets once more to Kill the Bill

So, as Sisters Uncut tweeted, another demo is happening on Saturday 21 August:

🔥 IT'S TIME TO TURN UP THE HEAT 🔥 #KillTheBill

But it’s not just in London that a demo is happening. Campaign group Collective Action LDN has been tweeting where protests are going on around the country. You can check out its Twitter thread for details:

The Police, Crime, Sentencing and Courts Bill is in the House of Lords, but the fight against this repressive and authoritarian legislation isn’t over. Join protests across the country on Saturday to #KillTheBill ⬇️

If you’re going to a #KillTheBill demo, expect a heavy police presence. Follow these simple steps from legal group Green and Black Cross to protect yourself. Make sure you read The Canary‘s full details of them here:

And watch out for the so-called ‘Blue Bibs’. These are police liaison officers. They may appear friendly and make idle small talk, but they’re actually trying to get info on you and those you’re protesting with. So in other words, do not engage with them.

It may seem that the Police Bill is too far gone to be changed. But raising public awareness of this toxic legislation, as well as showing the state that people won’t take its authoritarian agenda lying down, is crucial. So, see you on the ground.