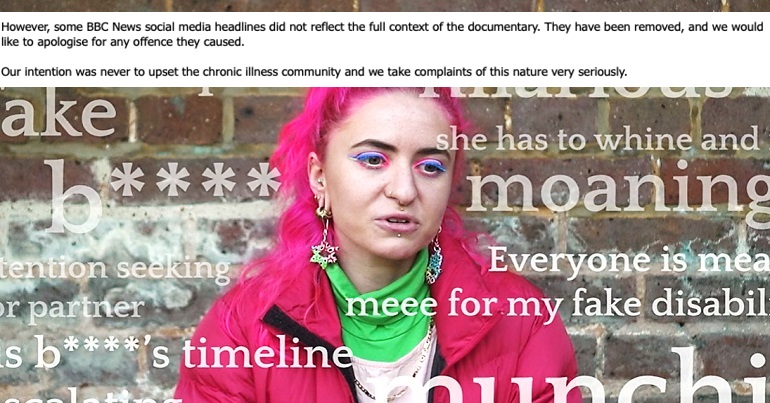 A BBC ‘documentary‘ called Sickness and Lies sparked hundreds of complaints from people. It revealed the figures in a fortnightly bulletin. And it’s no wonder that so many people kicked off. Because the show was nothing short of toxic.

Sickness and Lies: an ironic title

As The Canary previously reported, Sickness and Lies is about chronically ill people who other people accuse of faking or exaggerating their conditions. It looks at a Reddit group which accuses chronic illness influencers of these things. But the show was riddled with problems.

It presented incorrect assumptions about illnesses. The documentary showed that sometimes the Reddit group didn’t know what it was talking about. It platformed somewhat dubious psychiatry. But moreover, it fed-into the age-old stigma that chronic illness is ‘all in people’s heads’.

As The Canary previously wrote:

The psychologisation of physical illnesses has been happening for many years. That is, when a doctor can’t find a physical cause for a person’s illness, they claim their mental health is causing it; ‘psychosomatic‘ or, it is ‘all in their heads’. Generally this is nonsense.

Medical misogyny is another factor in accusations of fakery. The majority of people Sickness and Lies featured were women. The insinuation that a woman is wrong/stupid, or is making her illnesses up, is all too common in the medical and scientific communities – and in society more broadly.

Not that the BBC seemed to care. Because the show is still up on iPlayer. But people affected by chronic illness were furious and distressed.

So, as Disability News Service (DNS) reported, the BBC ended up deleting the tweet promoting Sickness and Lies. One social media user had screen-grabbed it:

A spokesperson told DNS that:

The original tweet does not reflect the full context of the programme and was removed.

“LOL” may be an apt response to this. Because a lot of people felt the BBC tweet did “reflect the full”, noxious “context” of the show.  So much so they complained in their hundreds.

Sickness and Lies got the BBC its most complaints in nearly two months. 615 people felt so strongly they contacted the BBC over it. Previously, over 6,000 people complained about its coverage of the Euros 2020 broadcast on 12 June. Prior to that, the BBC had not got this level of complaints over a programme since 23 May.

Thousands have now signed a petition calling on the BBC to take down the show. You can add your name here.

I, like so many others, write and talk about our health conditions online to raise awareness and so that we and others no longer feel alone. For a documentary and on the @BBC no less to insinuate that we are faking for fame or attention is abhorrent https://t.co/HywHHpSjzh

Pros of having a chronic illness: none.

Cons of having a chronic illness: your life is wrecked.

No-one fakes this for likes and shares. @BBC do better. Our lives aren't your clickbait.#NEisvoid #MEAwarenessHour #MyalgicE #MECFS #spoonie https://t.co/gAOfbfNEKb

One Twitter user who wished to remain anonymous complained to the BBC. They got a response. It was obtuse at best. The BBC said:

Yeah. That’s really not what happened in Sickness and Lies, though – is it?

Do not watch it

As writer Morgan Peschek, who curates the site A Kinky Autistic, said:

So, should you watch this wildly irresponsible and/or directly malicious documentary? Honestly, if you’re disabled, I wouldn’t recommend it – you won’t learn anything new, you’ll just be reminded how many people think you’re a liar and just how unsafe disabled people are in the world.

There’s no excuse for the BBC making then broadcasting Sickness and Lies. And the reaction of people with lived experience of chronic illness sums this up.

Featured image via BBC iPlayer – screengrab and The Canary (supplied)