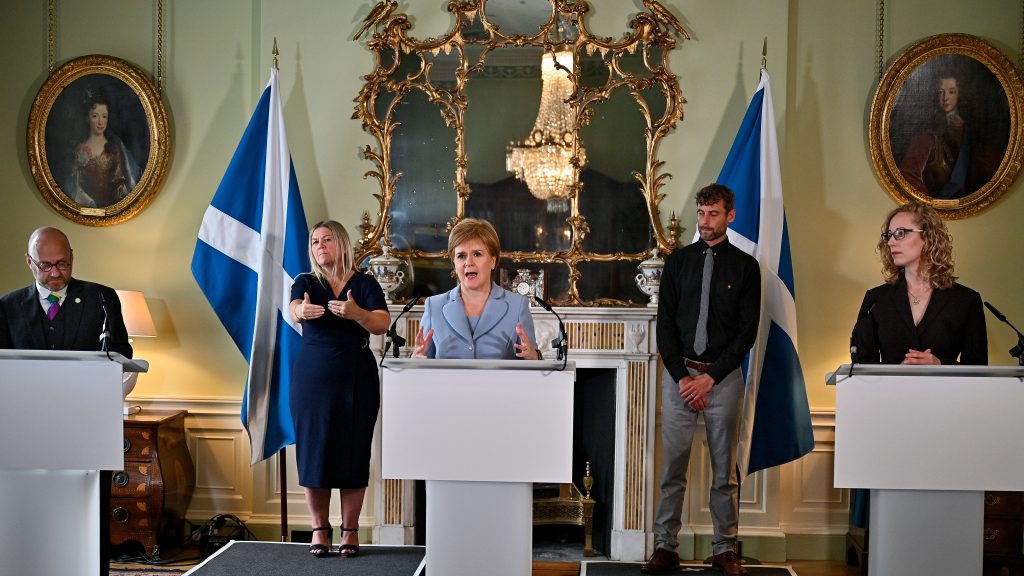 The Scottish Greens hailed Nicola Sturgeon’s “significant change of direction” on the oil and gas industry despite the first minister refusing to say whether she opposed new oil fields such as Cambo.

A deal between the SNP and Scottish Greens would see two Green MSPs become government ministers, with set policy areas where the two parties can disagree. But the agreement, which will need to be approved by Scottish Green members, falls short of any commitment to oppose new oil and gas exploration – a key pledge in the party’s manifesto.

Instead, the policy document offers support for a “pre-production oil and gas licence climate checkpoint review”.

Delighted to attend Bute House today with @lornaslater to announce the cooperation agreement between @scottishgreens and @scotgov. This begins a week of discussion for our party members, before they decide if we'll take this historic step, bringing Greens into government. https://t.co/GT5cm9ay35 pic.twitter.com/sQeFBf8Npw

The UK Government is expected to announce soon whether extraction of oil and gas at the Cambo site near Shetland is given approval, but Sturgeon has repeatedly refused to say whether she supports or opposed the plans. Ariane Burgess of the Scottish Greens has previously argued:

If given the go-ahead, the Cambo site could yield as many as 255 million barrels of oil over its lifetime, according to environmental campaigners. And it’s estimated the 132 million tonnes of CO2 emissions that could be produced would require an area of land some 1.5 times the size of Scotland to counteract them.

Sturgeon has asked prime minister Boris Johnson to “reassess” the plans and said there are “significant questions” about whether unlimited fossil fuel extraction should continue in the face of the climate crisis.

Challenged about potentially being part of a government that would not oppose further extraction of fossil fuels, Scottish Green co-leader Lorna Slater insisted her party were “unequivocally against Cambo” but said “our hands are tied”.

Environment and energy policies are not among those exempt from collective responsibility, meaning any Scottish Green minister would be unable to publicly disagree if the government supported new oil and gas fields.

Speaking at Bute House alongside the SNP leader, Slater said:

I’d like to acknowledge the First Minister’s direction on this – that she has made, I think, a significant change of direction on her approach to oil and gas with the statement that she put out last week and this is a big step in the right direction.

It must be a transition that is just for jobs for communities also to make sure that, as we reduce reliance on fossil fuel, we don’t increase our reliance on importing fossil fuels. But this agreement is serious about making sure that transition is just, but also that it happens at a pace that is necessary to protect our planet.

Patrick Harvie, the other co-leader of the Scottish Greens, said:

The opportunity here is to start taking faster and more ambitious action on the things that are within our control.

We can decarbonise heating and transport, we can invest in a fairer and more just society and make sure that that recovery from Covid is a green recovery, and the transition away from oil and gas is a just transition.

Climate change demands urgent action in all areas of life and we hope that the SNP and Greens working together, including with two Green ministers in Government, will be able to reduce emissions rapidly and ensure a healthy, liveable place for all.

There is much to welcome in the agreement as the details emerge. We are especially pleased to see steps addressing the plight of Scotland’s native woods, particularly rainforest.

With Glasgow scheduled to host the world at international climate conference Cop26 in November, the draft co-operation agreement comes at a pivotal moment in history for Scotland and the planet.