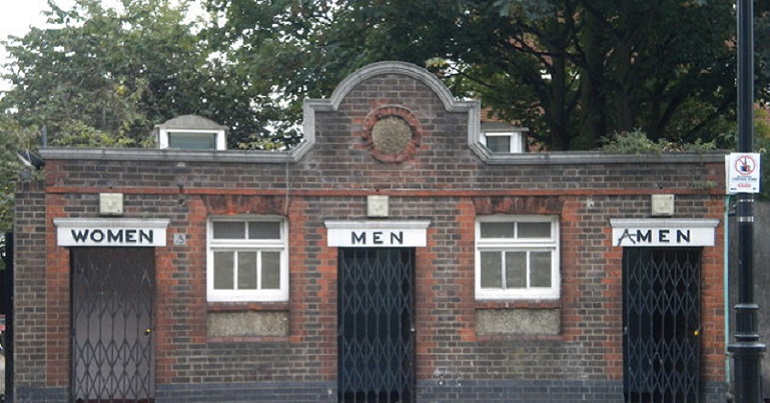 There’s a problem in the UK that people don’t often speak about. Yet it’s one that affects many of us: the lack of public toilets and the hollowing-out of this vital public service.

Public toilets have been around since the Victorian era. But as Historic England wrote:

Anyone caught short of late will know that public lavatories are no longer as convenient as they once were. Many have gone altogether, whilst others are frustratingly padlocked awaiting sale or demolition by local authorities. Some have been ingeniously repurposed – converted into flats, bars, restaurants, coffee shops, clubs, art galleries and even beauty salons.

The @GBToiletMap shows 1558 public toiletes in London. In some boroughs there's over 100, which is a relief. In others it's less than 20! Surely that's taking the 🤫 https://t.co/USc5QBupAF

This disparity in public toilet provision between London boroughs represents the wider picture across the UK.

As charity the Pituitary Foundation wrote, a Freedom of Information (FOI) request revealed that in England:

Of the 218 councils which responded, 11 had no toilet facilities at all, these councils included Liverpool, the City of Westminster, Wokingham, Epsom and Ewell, and South Cambridgeshire.

Moreover, across England around one public toilet serves 12,500 people. So, it’s of little wonder these vital services are thin on the ground in some areas. Because across the UK, councils have repeatedly closed public toilets since 2010 – shutting nearly 1,000 (22%) in ten years.

great but after 6pm there's hardly any… https://t.co/zgxBSqYI8F

As The Canary reported in 2020, there’s a loo crisis in England. But why does this matter?

In the UK, around 14 million people live with bladder-control issues. Around 6.5 million people have similar problems with their bowels. Meanwhile, the Royal Society for Public Health found that 43% of people with continence issues do not leave their homes as often as they’d like.

Also, disabled people face barriers to public toilet use. There are around 1,154 fully accessible and equipped public toilets in the UK. There are also around 9,000 basic accessible ones. For these, you need a special key. This is called the “Radar National Key Scheme”. But you have to buy the key online (or in Gosforth).

Then, there are the many homeless people. The number of rough sleepers is disputed, but before the pandemic estimates put it at around 28,000 people. So, what of toilets for them? In Manchester the council might fine them £100 for urinating or defecating in public. Menstruation will be an additional issue for rough sleepers who have periods.

Public toilet provision for trans people is also inadequate. The government recently ran a consultation on this, and some of the wording was trans-exclusionary at best. It also seemed to dismiss the idea of gender neutral toilets as a standard. A survey by Stonewall found that 48% of trans people “didn’t feel comfortable using public toilets”.

Access to clean toilets is essential for all of these people.

The arts-based research project Around the Toilet has documented many of these issues. For example, it noted in 2018 that:

It also published lived experience testimonies of people affected by a lack of public toilet access. One person who lives with irritable bowel syndrome (IBS) told Around the Toilet:

For me, travelling is not something I relish. For me it’s something I have to endure. Why? Because I have IBS and toilets have to feature heavily in any itinerary.

It’s incredible the effect that the lack of toilets has on one’s ability to get out and about. There is a lot of talk about older people becoming isolated. The lack of toilets is certainly a factor but until people start talking about loos, nothing will change and they will continue to close.

For chronically ill, disabled, homeless, trans, and other marginalised groups, often the only toilet option can be a private one in a restaurant, bar, coffee shop, etc. But of course, with many of these you need to make a purchase to get a code to access them.

Fully accessible public toilets are the mark of a caring and inclusive society. Currently the UK is failing on both those counts. And while provision of loos may seem like a small issue to some, it’s reflective of the state and society’s wider attitude to marginalised groups.