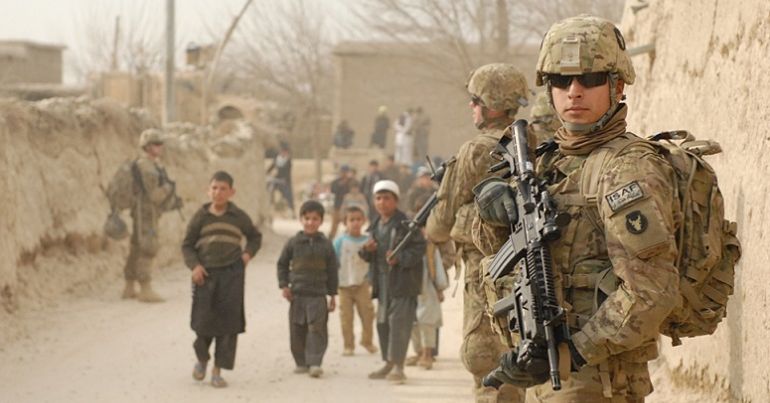 But, these cries of politicians and mainstream media pundits about rights for Afghan women are hard to swallow given the realities of life in Afghanistan

Moreover, the last 20 years of western military occupation, not to mention British and Soviet occupations since the early 19th century, haven’t exactly delivered full equality for women. Nor have they been about supporting human rights for Afghan people. So these sudden cries for equality by the western mainstream media and others are utterly meaningless.

A number of right-wing politicians across Europe have sought to exploit women’s rights in Afghanistan to pedal their usual bile. UK politicians have also expressed their concern for the position of women now that the Taliban is in control.

We must continue to support the women and girls of Afghanistan who face unspeakable levels of oppression. That’s why we’re prioritising them in the new Afghan Citizens’ Resettlement Scheme.

But Patel’s concern for settling citizens will confuse and utterly gall so many. As home secretary, not only has she presided over the deportation of UK residents to Jamaica, she’s trying to criminalise refugees. As written by The Canary’s Tom Coburg:

Her Nationality and Borders Bill has passed its second reading in parliament. Should it be enacted in its present form, the UK could be in contravention of several international laws and conventions. Ultimately, it may see the Johnson government open to condemnation and prosecution in the international courts.

Kathy Kelly of Ban Killer Drones spoke to The Canary. Kelly is also formerly of Voices for Creative Non-Violence (VCNV). Since 2009, VCNV “has led delegations to Afghanistan to listen and learn from nonviolent grassroots movements and to raise awareness about the negative impacts of U.S. militarism in the region”. Kelly told The Canary that while things improved in terms of education and employment for some women in major cities during military occupation, it was also the case that women:

As Kelly goes on to explain, there are many other complicating factors for life in Afghanistan. Kelly told us that when the US began its occupation, Afghanistan had one of the highest rates of infant mortality in the world. And:

After these 20 years of US occupation that’s still true

According to Kelly, while this isn’t the sole responsibility of the US military occupation:

the United States did not accomplish measures which would have made a significant difference for Afghan women in terms of the ability of an Afghan woman to assure that her child would be well nourished and well fed.

She recalled how VCNV regularly worked with people who would tell them they couldn’t feed their children, or that all they had to offer was “stale bread and tea without sugar”. She says during the occupation “there were soaring populations in the refugee camps”. And these camps were:

squalid and dangerous places. Dangerous because when the winter weather came, and it gets very very cold, people had no means to acquire wood or coal for fuel. They were burning plastic, burning tires. People didn’t have access to clean water

some of those refugee camps were right across the road from sprawling US military bases being serviced every day by truckload after truckload of food and fuel and water and ammunition.

I think there was always a sense, during the United States occupation of Afghanistan, that the cares and concerns of women and children were not anywhere near the importance of the United States maintenance of large bases – which could assert a US presence in the region that had great relativity to China and Russia.

She also said the US military presence:

had very little relative impact [on] bettering the human rights… and shelter for many many many ordinary Afghans.

Prosperity to the region? Hardly.

Kelly believes the US didn’t care about peace in Afghanistan nor people’s livelihoods. Because as she explained:

Eventually it became the case that the only way to get a job…especially if people didn’t want to engage in producing opium…the jobs available were working for the Afghan national security and defence forces, for the Afghan local police, for local warlords or for some version of the United States militarism. And what kind of job is that? You learn how to pick up a gun and shoot.

She said that in some of the areas she’d been to people were really crying out for the kinds of jobs that would have supported agricultural infrastructure. But it didn’t happen. And worryingly:

The United States was being informed regularly, through the special inspector general in Afghanistan reports, about all of the ways in which the military was becoming rife with corruption. And they didn’t act on that.

What needs to happen next

For the time being at least, Kelly hopes:

neighbouring countries will expand their refugee resettlement, that people will support the United Nations High Commission for Refugees in being able to rapidly expand their capacity to receive refugees at every country, certainly my country [the USA]

And she hopes too that:

Every country will start to make plans so that those who feel that they must leave, that they are at risk, can get out… we owe it to Afghanistan

Boeing and Raytheon and Lockheed Martin and General Atomics. These companies pocketed billions of dollars by dropping their weapons and strewing their hideous weaponry, their grotesque weaponry, all across Afghanistan.

It’s happened in Ireland as well, but the Irish were able to send the Raytheon Company packing up in Derry and we should learn from those models.

But at any rate, [Noting that our economy has been] bolstered by these wars, [she argues that we should now] do everything we can to make room and say: ‘You are welcome’ [to refugees].

It’s difficult to believe any invader of Afghanistan has the betterment of its people at heart. Western pundits claiming to support women’s rights are ignoring the obvious. More specifically, that imperial intervention severely complicates the lives of minorities, like women, whose lives are made significantly more dangerous by military presence and a heavily-funded arms trade.

For Western media and politicians to have, all of a sudden, discovered their inner ‘human rights activist’ is not only hypocritical, it’s galling. That faux outrage isn’t fooling anybody – nor does it hide the damage done to all people of Afghanistan.