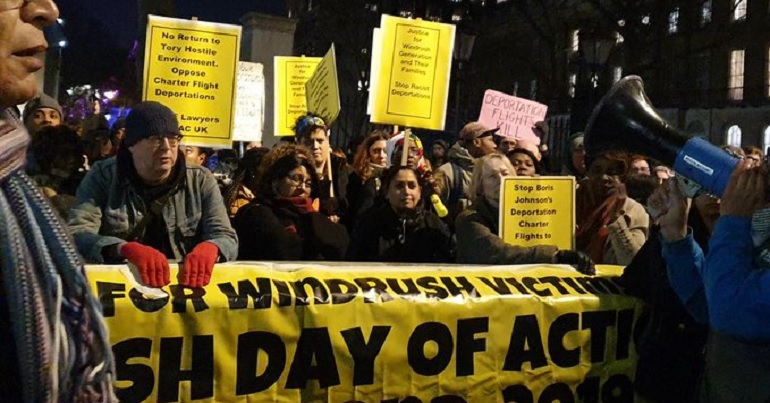 A storm already brewing over a planned deportation flight to Jamaica has intensified. Because more MPs have now got involved; the BBC has leaked an influential panel’s concerns; and a demo has blocked Downing Street, with a clear message – ‘no more flights’.

As The Canary previously reported, the government is about to run a deportation flight to Jamaica. Up to 50 people may be on it. The government claims they’re not British citizens. As the Morning Star reported, the flight is due to leave on 11 February. But there is growing outcry over this, because campaigners claim that among those facing deportation are people who have lived in the UK most of their lives.

Campaign groups BARAC UK and BAME Lawyers for Justice organised a demo. As the campaigners wrote:

Up to 50 people could be deported on this flight, people who will be torn apart from families including children, who have lived most of their lives in the UK and including people who are going through appeals with the Home Office.

So on Thursday 6 February, hundreds of people blocked the roads outside Downing Street:

Good to see so many people outside @10DowningStreet to protest against @BorisJohnson and @patel4witham's disgraceful, racist deportations. Our community has had ENOUGH! pic.twitter.com/2cxoJzcMej

People from all walks of life came out in support:

It was great to see so many community activists, MPs & others out tonight in support of @BameFor's protests against the Home Office's shameful deportation flights to Jamaica. No such flights should take place under the current broken @homeoffice system and in the absence of trust pic.twitter.com/Eiy6GUVAZD

Several Labour MPs went to the demo to show solidarity:

Meanwhile, some people had a direct message for Boris Johnson:

Thank you to all who came to our demo. It was lively, attended by approximately 250 people, and blocked Whitehall for at least 1 hour.

Speakers included MPs Diane Abbott, Bellavia Ribeiro-Addy, Florence Eshalomi and Claudia Webbe, plus campaigners and families impacted. [There was] a consistent message from all that the flight must be cancelled and the treatment of Caribbean communities who have made Britain their home is scandalous and racist.

At the demo, Anthea spoke about her lived experience. The government deported her husband; her children’s father. She said:

Her experience is probably similar to many people’s. But now, the panel in charge of a report into the Windrush scandal has added its voice to the growing calls to stop the flights.

As the Guardian reported, BBC Newsnight released the details of a leaked copy of the Windrush “lessons learned” report. The Guardian said the report:

recommended that the government consider ending the deportation of foreign-born offenders who came to the UK as children.

James Hanratty is the former president of the Council of Immigration Judges. He linked the government deporting people with criminal records to the Windrush scandal. Hanratty said:

It’s possible – but I don’t know the facts – that some of the people on the deportation flight may indeed be Windrush victims.

Therefore – although it’s not for me to set out policy or advise the government – on the face of it, it would seem wise to postpone that flight until after the Windrush report is published.

But will this intervention be enough to change anything?

The flight must stop. Immediately.

Holbourne viewed the panel’s leaked comments as positive. She told The Canary:

The news of the leaked Lessons Learned report recommending that those who came to the UK as children but are National offenders should not be deported is welcome news and in line with what we ourselves have maintained. This strengthens the argument that the flight must be cancelled as many booked on the deportation flight did come to join Windrush generation parents and grandparents etc as children. They were told they were British citizens.

The delayed report not only needs to be published before any deportations are even considered but the recommendations in it must be acted upon and implemented.

We have been calling for an independent public inquiry into the Windrush scandal. This also needs to happen before anybody is deported to the Caribbean.

The government policy of ‘deport now appeal later’ must cease with immediate effect.

Now, people must wait. At the time of publication, the verdict in a judicial review over the government’s treatment of the detainees was due. But with the controversy growing over the deportation flight, it seems unfathomable that the government will not change its position.