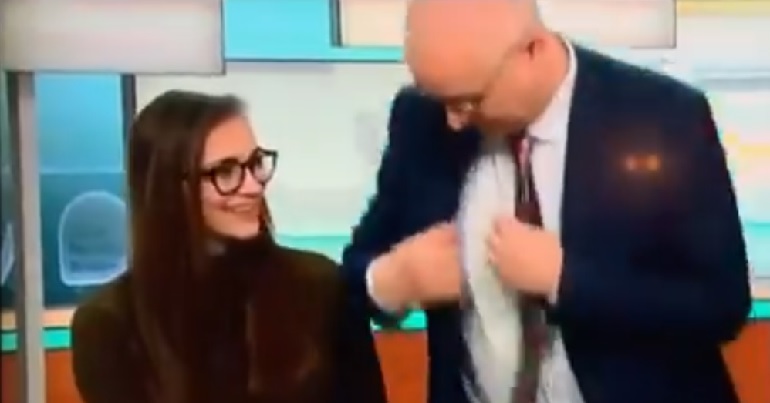 Blakeley’s response to the event was perfect. Because she focused not on Dale’s tantrum but on the facts that everyone in Britain needs to be aware of.

“Austerity is compromising the quality of children’s social care services”

Writing in the Mirror, she spoke of the sorry “state of children’s social care“, saying:

The care provided by local councils to some of the most vulnerable teenagers, children and babies in our society has been stripped to the bone by a decade of cuts to local government funding.

Central government funding to local government has fallen by nearly 50% since 2010 and most councils simply don’t have the cash to provide the services vulnerable children need.

What’s more, by increasing poverty and unemployment and making it harder for vulnerable families to access services, austerity has increased demand for children’s social care services at the same time as budgets are being cut. Between 2008 and 2018, the number of children in care rose from 59,400 to 75,420.

And coming back to Dale walking off the TV set, she said:

I was about to respond by pointing out that a series of experts – from the Children’s Commissioner, to the Association of Directors of Children’s Services, to the British Medical Association – have said that austerity is compromising the quality of children’s social care services but before I could finish, Dale tore off his microphone and stormed off the set.

Whilst I do enjoy making fun of old men online, there is a serious point to be made here.

Children’s social care is in crisis and it *is* about austerity. https://t.co/zK9rBCjXQz

Dale’s storm-off came just as a new study from the Joseph Rowntree Foundation (JRF) suggested that poverty has increased for children over the last five years. The JRF said that, despite rising levels of employment, in-work poverty has also gone up because often people’s pay, hours, or both, are simply not enough.

Just over half of people in poverty are in a working family, compared to 39% 20 years ago, according to the research.

The JRF said 14 million people are now living in poverty, including four million children and two million pensioners, up by 400,000 and 300,000 respectively over the past five years.

The highest poverty rates were in London, the North of England, the Midlands and Wales, and the lowest were in the South, Scotland and Northern Ireland, said the report. The differences in poverty rates were often driven by the availability of good-quality jobs and housing costs.

The report said people were more likely to be in poverty if they:

The JRF called on the government to improve job security and quality, see the benefits system as an essential public service that loosens the grip of poverty, and help make more low-cost housing available.

Past successes in recent decades show that it is possible for the UK to loosen the grip of poverty among those most at risk, but this progress has begun to unravel and it will take sustained effort across the country and throughout the governments of the UK to unlock poverty.

Millions of families care for each other, raise their children and work hard without any guarantee that they will escape poverty…

It’s not right that so many are unable to build a firm foundation to their lives because their jobs are insecure or they can’t find a home they can afford.

Without a better deal for working families, and a social security system that provides a public service for all of us, the UK faces further division and deeper poverty.

Something is seriously wrong

James Taylor, of disability equality charity Scope, responded to the report by saying:

These findings are shocking, but sadly will not be surprising to disabled people.

Life costs much more for disabled people, on average £583 a month. At the same time, huge numbers of disabled people are denied the opportunity to get into and stay in work.

The findings from JRF’s report today could not be clearer – for too many people it’s becoming harder and harder to keep their heads above water.

At food banks, we’re seeing issues with our benefits system, like the five-week wait for Universal Credit and payments not covering the cost of living, pushing more people than ever before to food banks.

The Government must crack down on business models based on poverty pay and insecure jobs.

Zero hours contracts should be banned and the minimum wage must go up to at least £10 an hour right away.

Austerity is far from over, and millions of people in Britain continue to suffer as a result. It may be difficult for people in right-wing bubbles (like Iain Dale) to recognise or accept it, but this is the reality of Tory Britain. And fortunately, we have people like Grace Blakeley who refuse to shy away from the truth.

Featured image via screenshot, with additional content via Press Association