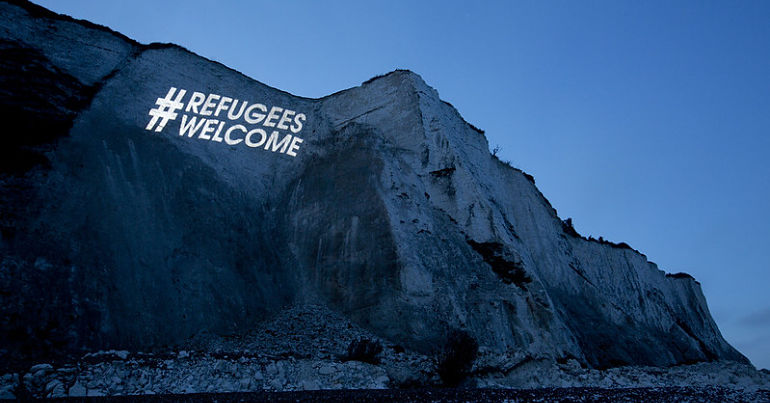 According to Press Association, at least 592 people were rescued or intercepted attempting to cross to Britain on 12 August – a record for a single day. Tragically, a 27 year old Eritrean man died after he and four others jumped overboard as their boat started to sink. Altogether, more than 11,000 people have succeeded in crossing the Dover Strait aboard small boats in 2021.

Meanwhile, home secretary Priti Patel’s response is to criminalise refugees. Her Nationality and Borders Bill has passed its second reading in parliament. Should it be enacted in its present form, the UK could be in contravention of several international laws and conventions. Ultimately, it may see the Johnson government open to condemnation and prosecution in the international courts.

Provisions of the bill

When the bill was first introduced, Patel told the Commons that:

Anyone who arrives illegally will be deemed inadmissible and either returned to the country they arrived from or a safe third country.

According to London Immigration Lawyers, if the bill is enacted, it will also mean that:

Border Force officers would have the power to turn back migrant boats using ‘reasonable force if necessary’.

Furthermore, according to the Refugee Council, if enacted the bill would mean that:

Refugees who do not arrive in the UK directly from a country of persecution (for example, those who travel across Europe) will not enter the asylum system when they make a claim for protection. Instead their claim will be treated as inadmissible while the Government tries to remove them from the country. They will also be under threat of a four-year prison sentence for ‘entering illegally’. If removal isn’t possible within a particular period of time, then their asylum claim will be heard.

However, even when these refugees are granted asylum, and therefore recognised as in need of protection after fleeing war, persecution, and tyranny, it will be under the guise of ‘temporary protection’. This means they will be given a lesser period of leave to live in the UK, which will need to be regularly renewed. They will be at risk of being removed from the country each time their leave is renewed.

The Council points out that this approach:

flies in the face of the Refugee Convention, which states that the status of an asylum claim should not be dependent on the mode of entry into a country.

Indeed, Article 31 of the convention bans states from imposing any sanction or punishment on a refugee or asylum seeker because of the way in which they arrived.

In its explanatory notes to Patel’s bill, the Home Office states that anyone helping a refugee to enter the UK will be liable to life imprisonment.

However, the Home Office denies this applies to certain organisations helping those in distress at sea:

This doesn't apply to organisations such as HM Coastguard and RNLI helping those in distress at sea.

If the claim is genuine, this provision in the bill would presumably apply to individuals not party to officially recognised rescue organisations.

It’s not clear if this would apply, for example, to Channel Rescue – a grassroots organisation that provides onshore assistance to refugees arriving ‘unofficially’ in the UK by boat:

2/2 Once the people on the boat reached the shore our vols went to greet them and were accosted by a number of people shouting and behaving in a hostile way. Our vols then made a statement about what they had witnessed to Border Force #SafePassage #ChooseLove

Certain international laws and conventions require the UK to provide a duty of care to refugees. Erik Røsæg, professor at the Scandinavian Institute of Maritime Law, points out that this duty is recognised by:

The UN High Commissioner for Refugees further clarifies that asylum-seekers and refugees who are smuggled should not be deprived of any rights regarding access to protection and assistance.

In March, a leaked Home Office document listed countries to which the UK was considering transporting refugees. These include Papua New Guinea, Ascension Island, St Helena, Morocco, and Moldova. Also under consideration were the Isle of Man, Gibraltar, and other islands off the British coast.

However, should such transportation and incarceration proceed, the UK would be in contravention of more international laws and conventions. For example, the Council of Europe (CoE) is responsible for the European Convention on Human Rights (ECHR), in which Article 5 prohibits arbitrary arrest and detention. (The UK helped set up the CoE, which is distinct from the EU.)

Australia notoriously imprisoned refugees and asylum-seekers, who were trying to enter Australia by boat, on offshore islands such as Manus (Papua New Guinea) and Nauru. The refugees, including children, were detained and abused over many years. Suicides were attempted, there were numerous instances of self-harm, and lives were lost.

The leaked ‘Nauru Files’ reveal events on the island state that include “attempts of self-harm, sexual assaults, child abuse, hunger strikes, assaults and injuries”. They include more than “2,000 incident reports” at the refugee centre: “seven reports of sexual assault of children, 59 reports of assault on children, 30 of self-harm involving children and 159 of threatened self-harm involving children”.

But the International Criminal Court. has declared arbitrary detention of refugees and asylum-seekers unlawful. That judgement, which can apply to any state, was based on the Rome statute, to which the UK is signatory.

A powerful video by Channel 4 News shows the dark side of Australia’s “Operation Sovereign Borders” policy, to which Patel’s proposed measures bear similarity:

If Patel’s bill is enacted, there would be aspects – such as imprisonment of anyone helping a refugee to enter the UK – that would likely see condemnation and even prosecution. Likewise if the Johnson government adopts Australian-style ‘offshore processing’ (aka detention) of refugees.

The bill is yet another expression of the Conservative government’s ‘hostile environment’. That’s enough reason for it to be ditched altogether.