As the Taliban take over Afghanistan, let’s remember the US's role in their creation - Canary 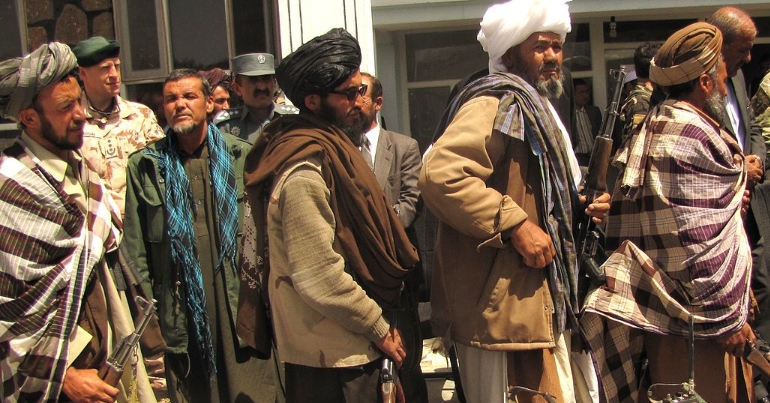 The US‘s withdrawal of its troops from Afghanistan has gone alongside a stunning recapture of much of the country by the Taliban. This has naturally raised predictable whines from neoconservative elements who believe that withdrawal has “led to a Taliban triumph”.

However, not only is continuing the occupation of Afghanistan an abject exercise in futility, the US also has partly itself to blame for the rise of the radical Islamist group. A closer examination of history shows that this ascendency traces its roots to US interference in earlier decades.

Taliban sweeps up control of most of the country

On 14 August, the Guardian reported that the Taliban had taken control of Mazar-i-Sharif. This is Afghanistan’s fourth-largest city and “the government’s last major stronghold in the north”. On the same day, the New York Times reported:

President Biden’s top advisers concede they were stunned by the rapid collapse of the Afghan army in the face of an aggressive, well-planned offensive by the Taliban that now threatens Kabul, Afghanistan’s capital.

President Biden repeated that he wouldn’t reverse his decision. He pointed out that four presidents have presided over the US occupation of Afghanistan. He affirmed that he “would not, and will not, pass this war on to a fifth”. Biden first announced a US withdrawal on 14 April. He had set a deadline of 11 September, 2021 – the 20 year anniversary of the 9/11 attacks in 2001.

Another attempt at peace?

Meanwhile, Afghan president Ashraf Ghani said in an address to the nation that he would reorganise the military and begin a process of consultation with Afghan society and international allies. Rumours have been swirling that Ghani might step down as part of some kind of peace deal. In 2018, the Trump administration sent a ‘special envoy’ to begin a peace dialogue with the Taliban. The US then agreed to release 5,000 Taliban prisoners in exchange for a ceasefire in 2020.

The Taliban eventually agreed to peace talks with the Afghan government in that same year, but the talks didn’t go anywhere. The former didn’t have much incentive to negotiate even then given their military strength throughout the country. The Afghan government, meanwhile, has never had much credibility. It’s largely considered a US puppet that owes its position to the 2001 US invasion of Afghanistan, which toppled the then-Taliban-led government.

There is a stunning irony to this. The US labelled the Taliban an enemy in the wake of the 11 September terrorist attacks (based on arguably dubious allegations that the Taliban had ‘harboured terrorists’ and had links to Osama bin Laden’s Al-Qaida). The reality, however, is that the Taliban owe their rise in part to US interference in Afghanistan.

During the Cold War, Afghanistan became a major focal point of proxy conflict between the world’s then dominant powers, the US and the Soviet Union (USSR). The USSR was allied to Afghanistan’s socialist government of Mohammed Najibullah. So the US intervened on the side of its opponents by launching ‘Operation Cyclone’.

Most expensive covert action in history

The operation was hatched by the US’s Central Intelligence Agency (CIA). Its aim was to covertly arm and finance a group of rebel guerrilla fighters called the ‘mujahideen’. It ultimately channeled $2bn to the Islamist group in what became the most expensive covert action in history.

Hostilities culminated in the Afghan Civil War, which pitted US-backed mujahideen against the Soviet-backed government. The problem was that, having now given this latter group support, the US couldn’t put the genie back in the bottle. When hostilities ended in the early 1990s, the Taliban emerged as a mujahideen splinter group. By 1996, it had taken control of most of the country and was essentially the government of Afghanistan.

So when the US invaded Afghanistan to remove the Taliban, it was toppling a ruling faction that it had helped create in the first place. And this shines a light onto the vicious cycle that can emerge when Western powers interfere. Initial interference creates unintended consequences that then provide a ruse for further interference.

Another example is that of Vietnam. The country’s move toward communism was sparked in large part by French colonialism. (The communists were, after all, the most militant and committed of the anti-colonial movement’s factions.) This ‘problem’ was then ‘solved’ by the US first backing a puppet government in South Vietnam. It then invaded when this weak and unpopular government struggled to resist both an invasion from the communist-controlled north and an internal guerrilla insurgency.

Let Afghans lead the fight against the Taliban

To be clear, given its poor record on issues like women’s rights, the Taliban’s return to power is nothing to celebrate. But those who actually have credibility when it comes to opposing the Taliban are local Afghan democratic socialist factions like the Progressive Democratic Party of Afghanistan and the Solidarity Party of Afghanistan (SPA). Though these parties unequivocally stand against the Taliban, they stand against the US occupation in the same way. In fact, the SPA boycotted the last election since it claims no one can get elected without US support.

The US, on the other hand, obviously doesn’t have a shred of credibility when it comes to opposing the Taliban. Because just like the monster in Mary Shelley’s Frankenstein, the US created a problem that it ultimately couldn’t contain. Worst still, Washington then ended up using that problem to provide bogus justification for its self-serving foreign policies. It’s time to break this vicious cycle of interference begetting further interference.