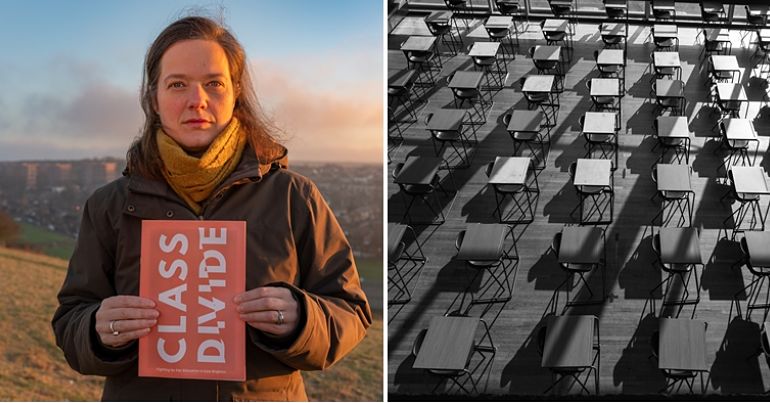 On Thursday 12 August, GCSE results reached a record high. It was also the second year running that traditional exams had been cancelled due to coronavirus (Covid-19). This year, teachers determined the results by assessing their pupils on what they’d been taught during the pandemic.

Needless to say, high grades are great news for the students that achieve them. But just as this pandemic has further highlighted inequality in society, education is no exception. Because Thursday’s results showed pupils from poorer backgrounds are falling further behind those from wealthier ones. And while this difference can’t be expressly attributed to coronavirus, the gap in educational achievement between rich and poor pupils is widening.

Class Divide is a grassroots campaign group  in Brighton and Hove on the south coast of England. And it’s only too aware of this division between rich and poor in education. Because it has been:

fighting to draw attention to the deeply injust educational attainment gap for young people from the communities of Whitehawk, Manor Farm and Bristol Estate in Brighton and Hove.

Class Divide’s chief spokesperson Carlie Goldsmith spoke to The Canary. She said unless local authorities take the right kind of action, this nightmare – or “bonfire of futures” as Class Divides calls it – of a widening educational gap will continue.

Why results can matter

Goldsmith told The Canary that discrimination in education means the exclusion of young working-class people from several life opportunities. She said that in the estate in which she grew up, typically just over 30% of children pass their English or Maths GCSE. This then means for the remaining 60% plus:

While Goldsmith acknowledges people can recover from not passing their GCSEs, possibilities for people from working class areas are limited. And when families see an education system that doesn’t work for or support them, “year after year after year”, they become disillusioned with it. She said it’s like their future is set alight on a bonfire. And growing up in a “sea of affluence”, in a city like Brighton, only makes it worse. Because, according to Goldsmith, it creates the kind of thinking:

if everyone else is doing alright, why am I not?

And this is much more than just a feeling. She said as Brighton is the “classic seaside town”, its main industry is the hospitality sector. Which is where a number of available jobs appear to be. And as there are a lot of qualified people already living in Brighton, the jobs that are available go to those with qualifications.

Pupils from poorer backgrounds face challenges that richer families don’t even need to think about. Parents from wealthy backgrounds can offer their children much more “because of the social capital” they have. This capital means they have contacts that could get their child an internship or simply offer them a place to stay in another city while they look for work.

According to Goldsmith, rich parents resisted an attempt by Brighton & Hove City Council to make local school admissions fairer. Some years back, the council proposed a lottery system that would give children from poorer backgrounds access to better schools outside their catchment area. But local middle-class parents objected. They used their influence with the council to lobby against the idea. And while a form of lottery system did go ahead, it has had little to no benefit for children from estates that Class Divide represents.

Had it happened, says Goldsmith, it would have created a greater social mix in the school which contributes to a better quality education for everybody.

It’s not an “intellectual exercise” either

So they don’t really get what it’s like for families from poorer backgrounds. Additionally, Class Divide says access to resources can either make “learning in a pandemic possible – or utterly impossible”. During lockdown, some children were in conditions:

more affluent families wouldn’t leave a pet in, kids going hungry or being forced to grow on a diet of vital but grindingly monotonous food bank provisions

Additionally, children have to deal with “responsibilities far beyond [what] their age should allow such as caring for parents and siblings”.

Class Divide has five demands for Brighton & Hove City Council to bring about change. These demands call on the council to examine the situation, acknowledge the inequality, and then implement a solution. They are:

Ensure the Local Authority produces an annual report on the school outcomes and attainment of children… and shared with the community and online.

Ensure the Local Authority publishes a plan that specifically addresses what actions will be taken to reduce the identified educational inequalities experienced by children, young people and adults in our area. This should include closing gaps in attainment, exclusion, access to learning across the life-course, and levels of financial investment. This plan will be subject to annual review with updates circulated to the community.

Make training on the experiences of working-class children in education compulsory for all school leaders and teachers in Brighton and Hove.

Reduce the rate of school exclusions and the placement of our children in alternative schools to the Brighton and Hove average, with a plan for further reduction by moving away from punishment approaches to behaviour management towards models informed by an understanding of the social and emotional development of children.

Give local people a second chance by providing local learning and training opportunities and develop advocacy support for parents struggling to keep their children in school.

A local story with a global message: deal with privilege

Class Divide’s campaign focuses on east Brighton. So it’s a local story but one that, as Thursday’s GSCE results highlighted, is relevant to other parts of the UK, and the world.

An episode of Nice White Parents – a podcast series focusing on racial inequality in New York city’s public schools – showed how white parents were able to use their privilege to “pull strings” to get their children into “one of the big three” middle schools in New York. A recent report from the Civil Rights Project found racial segregation in New York state schools was the worst in the United States.

A child or young person’s circumstances, such as their wealth, gender, ethnicity and where they live, play an important role in shaping their opportunities [for] education and life.

Tackling inequality means ensuring that children have better life options available to them and creating a genuinely fair society. To do so we must tackle class privilege. And in going about this, local authorities can play a part.

But they need to act. They need to intervene to ensure schools are socially mixed. Authorities also need to offer proper support to those who wish to return to education. This would go some way towards ensuring working-class people have the same opportunities as their more wealthy neighbours.