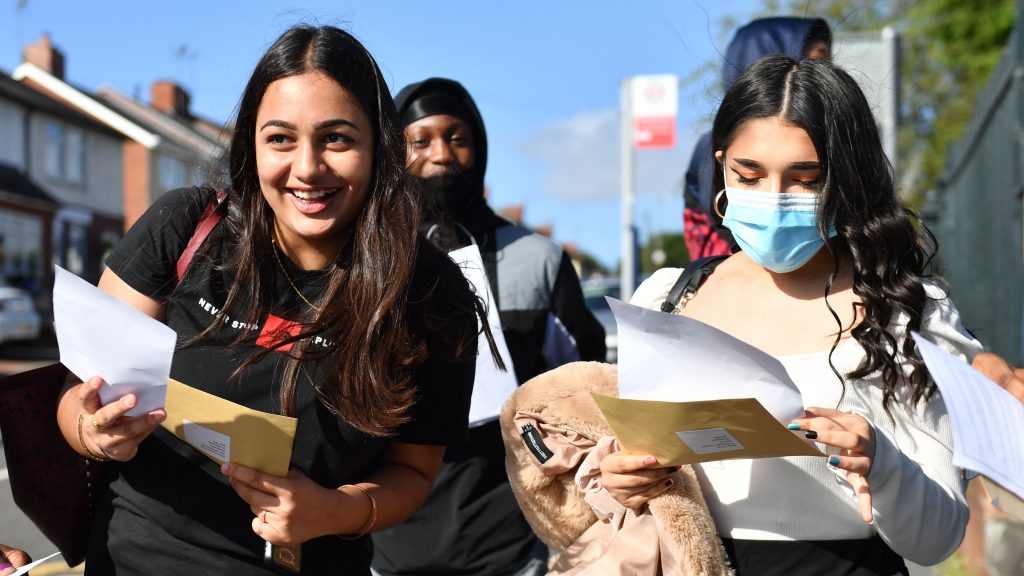 The proportion of GCSE entries awarded top grades has surged to an all-time high after exams were cancelled for the second year in a row due to Covid-19.

Hundreds of thousands of youngsters have been given results determined by their teachers, with pupils only assessed on what they have been taught during the pandemic.

Overall, 28.9% of UK GCSE entries were awarded one of the top grades this year, up by 2.7 percentage points on last year when 26.2% achieved the top grades, figures for England, Wales and the north of Ireland show.

Girls have pulled further ahead than boys amid the rise in top grades this year.

According to figures from Ofqual, the number of 16-year-old students in England who entered seven or more GCSEs and received a 9 – the highest grade under the numerical grading system – in all subjects has risen.

Overall, the figures show that 7.4% of entries in England were awarded a grade 9, compared with 6.3% last year.

The proportion of entries getting at least a 4 or a C grade is also a record high.

The figures, published by the Joint Council for Qualifications (JCQ), cover GCSE entries from students in England, Wales and the north of Ireland.

Independent schools have seen the largest absolute increase in the highest grades compared with other types of schools and colleges – up four percentage points on last year.

Some 28.1% of entries at academies achieved at least a grade 7 this year, a 2.2 percentage point increase from last year, when 25.9% of entries were awarded top grades.

Last year and this year

Last summer, the fiasco around grading led to thousands of A-level students having their results downgraded from school estimates by a controversial algorithm before Ofqual announced a U-turn.

The proportion of GCSE entries awarded top grades rose to a record high last year after grades were allowed to be based on teachers’ assessments, if they were higher than the moderated grades given, following the U-turn.

This year, teachers in England submitted their decisions on pupils’ A-level and GCSE grades after drawing on a range of evidence, including mock exams, coursework and in-class assessments using questions by exam boards.

On Tuesday, the proportion of A-level entries awarded top grades reached a record high after exams were cancelled, with 44.8% achieving an A or above.

No algorithm was used this year to moderate grades.

Instead, schools and colleges in England were asked to provide samples of student work to exam boards, as well as evidence used to determine the grades for the students selected, as part of quality assurance (QA) checks.

Random and targeted sample checks of evidence were also carried out after grades were submitted.

Work from A-level and GCSE students from 1,101 centres in England, around one in five schools and colleges, was scrutinised by exam boards.

Assessment of the grades

For 85% of the schools and colleges whose students’ work was scrutinised as part of QA checks, the regulator said the subject experts were satisfied that the evidence supported the teacher-assessed grades that were submitted.

For the remaining 15%, professional discussions took place between teachers and curriculum leads in schools and colleges with external subject experts and, where necessary, centres reviewed and revised their grades.

This represented less than 1% of all the GCSE and A-level grades issued.

It is important to emphasise that the system of teacher assessment under which these pupils have been assessed is different from public exams and is therefore not directly comparable.

The GCSE grades awarded to these young people are a fair and accurate reflection of their performance under the robust system used this year, which will allow them to progress to post-16 courses and apprenticeships in the normal way.

On behalf of JCQ and the exam boards, I would like to congratulate all students receiving their results today.

The impact of Covid has undoubtedly provided a difficult chapter in their education journey and their resilience is to be applauded. We wish them all the best as they take their next steps in life.

Teachers used their professional judgment and submitted the grades and evidence in good time for us to check and award grades today.

Their efforts will allow students to swiftly progress on to the next stages of their education or training.

Schools minister Nick Gibb said pupils receiving their GCSEs have been through an “exceptional year” because of the coronavirus pandemic.