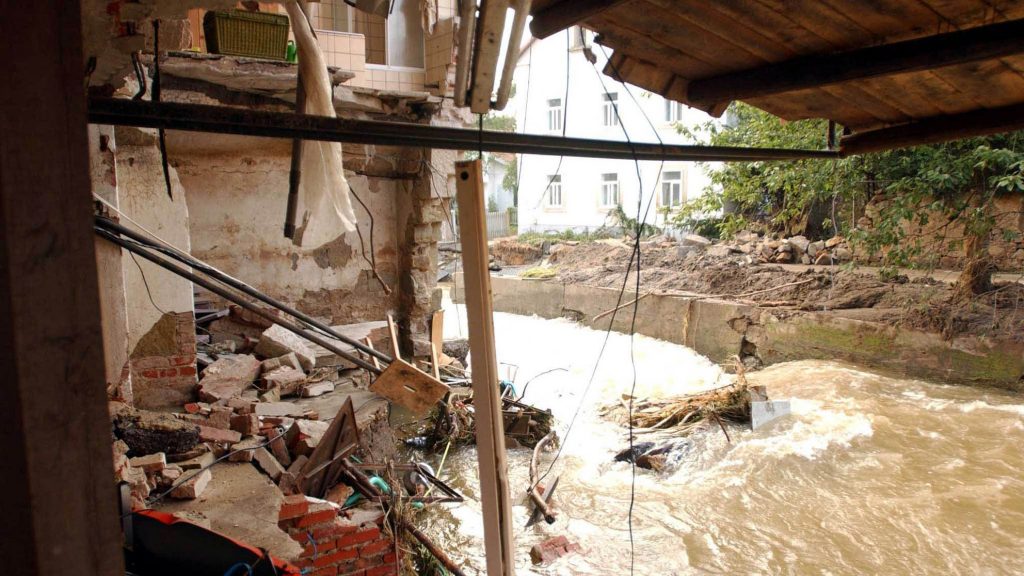 Climate change has made the kind of heavy rainstorms that drove deadly flooding in Europe last month more likely, scientists have warned.

Researchers found that extreme rainfall events similar to those which led to severe flooding in Germany, Belgium, the Netherlands, and Luxembourg are between 1.2 and nine times more likely to happen because of global warming.

A rapid study by climate scientists as part of the World Weather Attribution initiative also found the kind of downpours that caused the floods are between 3-19% heavier because of rising temperatures caused by humans. They warned that as global temperatures continue to warm, the chances of extreme rainfall and floods will rise further.

Last month’s heavy rainfall, which helped cause the flooding, happened in a world that is 1.2C warmer than it was in the late 1800s due to human activity – mostly burning fossil fuels – causing emissions of greenhouse gases.

The floods – which were worst around the rivers Ahr, Erft, and Meuse – caused at least 184 deaths in Germany; 38 in Belgium, and caused devastation to homes, roads, railway lines, and businesses, cutting off some villages for days.

The rapid analysis said the flooding was caused by very heavy rainfall over a period of one to two days, already wet conditions, and local water and river levels.

The researchers focused their assessment on how climate change affected the maximum one-day and two-day rainfall events in the two small regions where the flooding was most severe, and more widely over western Europe. In the Ahr-Erft region in Germany and the Belgium part of the Meuse catchment the amount of rainfall that fell broke records by large margins, with 93mm of rain (3.7 inches) falling in one day around the Ahr and Erft rivers.

Because of challenges assessing the impact of climate change on events in a small region, the scientists broadened their analysis to see how likely similar extreme rain could occur across a large area of western Europe. They also focused on rainfall rather than other causes of the flooding, in part because floodwater destroyed river monitoring equipment.

The team of 39 scientists from the UK, Europe, and the US used weather records and computer models to compare the likelihood and intensity of such rainstorms in the current climate and a world without 1.2C of warming.

Across the larger region, climate change caused by humans has increased the amount that fell in one day by 3-19%, with a similar increase for a two-day event. It’s additionally increased the likelihood of similar rainfall events to those which triggered the floods by anywhere between a factor of 1.2 or 20% more likely and nine times more likely, the researchers concluded.

This kind of event is rare in any one location, likely to occur once in 400 years in the current climate, but such events could happen more frequently than that across the wider western European region. Rising global temperatures increase the intensity and likelihood of extreme rainfall because a warmer atmosphere can hold more water, causing more heavy rain, and can also affect circulation patterns.

In a climate 2C warmer than in pre-industrial times, the computer models suggest that the amount of rain in a one-day extreme event would increase by a further 0.8-6%, and it would be a further 1.2-1.4 more likely to happen.

This event starkly shows how societies are not resilient to current weather extremes.

We must reduce greenhouse gas emissions as quickly as possible, as well as improving emergency warning and management systems and making our infrastructure ‘climate resilient’ – to reduce casualties and costs and make them more able to withstand these extreme flooding events.

Dr Friederike Otto from the University of Oxford said:

These floods have shown us that even developed countries are not safe from severe impacts of extreme weather that we have seen and known to get worse with climate change.

This is an urgent global challenge and we need to step up to it. The science is clear and has been for years.

The rapid attribution study comes after a major review of climate science by the UN’s Intergovernmental Panel on Climate Change (IPCC) which re-confirmed that human activity was unequivocally driving the climate crisis, with impacts such as deadly heatwaves, floods, and storms already being felt.