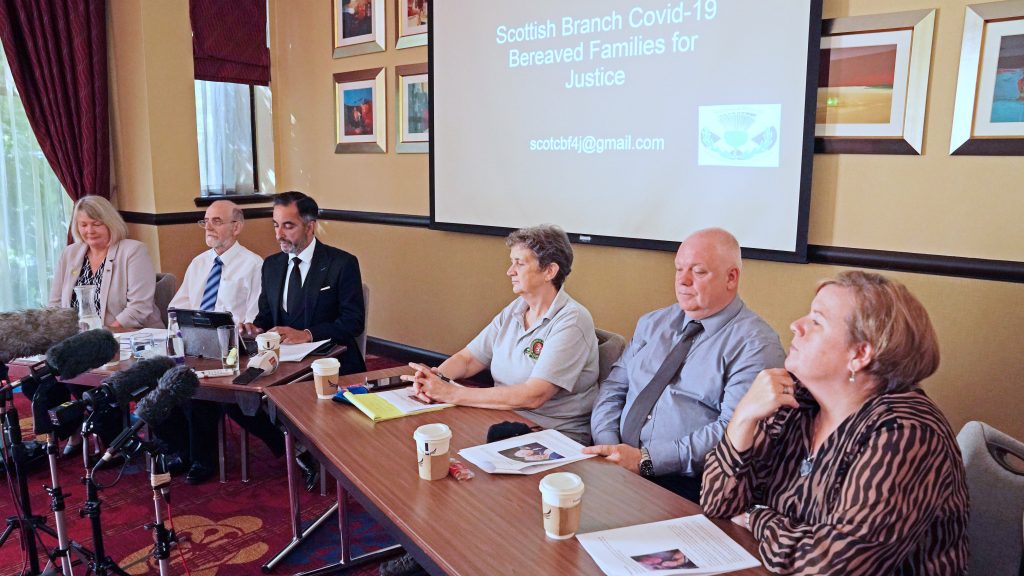 People who have lost loved ones from coronavirus (Covid-19) have pledged to deliver for others in the same situation, as a public inquiry was announced in Scotland.

Speaking at a press conference after the decision was made public on Tuesday 24 August, Alan Wightman – who leads the Scottish chapter of Covid-19 Bereaved Families for Justice – spoke directly to families who had suffered loss from the virus.

The group met with Covid Recovery Secretary John Swinney on 24 August, where they were told the inquiry would be fully established by the end of the year, with a consultation launched the same day. Meanwhile, the group’s solicitor Aamer Anwar urged prime minister Boris Johnson to follow the Scottish government’s lead and bring forward a UK-wide inquiry.

Holding back tears as he addressed the press conference, Wightman said:

There are five of us here today who have led this campaign, but there are many others that we represent. Many of them have told me their personal stories and I thank them for doing that.

Today, we have a commitment, we will continue and we will get the answers that they want.

Wightman lost his mother Helen after she died from coronavirus in her Fife care home.

The UK-wide public inquiry is scheduled to start next spring, but Anwar – a noted human rights lawyer – said that must be brought forward to offer closure to families who have suffered bereavements across the country. He said:

Boris Johnson should take note that his Government can no longer be allowed to hold the process back from asking difficult questions.

There were 154,811 Covid-19 deaths in the UK, every single death represents failure, and public inquiries cannot be delayed any longer by a UK Government, whether it be in England, Wales, or Northern Ireland.

Peter McMahon, who lost his wife Debbie at the age of 53 from coronavirus, was one of the campaigners who tearfully watched the first minister announce the inquiry. He said:

Thanks to Nicola Sturgeon and the rest of the Scottish Government for the decision they’ve made today, it’s very welcome. My wife Debbie, along with thousands of others, died what I see as an avoidable death aged just 53.

I would like this public inquiry to confirm who took certain decisions, clarify why they were taken, especially around the ending of shielding in July 2020.

Debbie was one of the thousands instructed to isolate in their homes because of pre-existing conditions, owing to her asthma, fibromyalgia, and the removal of one of her kidneys in 2018. Around a month after her return to work in August of 2020, Debbie contracted coronavirus and died three weeks later.

2,652,214 people in Scotland have been tested for #coronavirus

Sadly 10 more people who tested positive have died (8,080 in total)

Jane Morrison, 63, is also one of the leaders of the campaign, saying on 24 August she was “delighted” about the decision. Morrison lost her wife Jacky, also in October of last year, after she contracted coronavirus in hospital after being admitted with jaundice three weeks earlier. She said:

I’m delighted that the Scottish Government has agreed to hold a public inquiry.

I think it must be said that not only are they big enough to admit that mistakes were made, I think they have a genuine desire to learn lessons and the public inquiry will allow this to happen, and more importantly it will enable families to get much-needed answers.