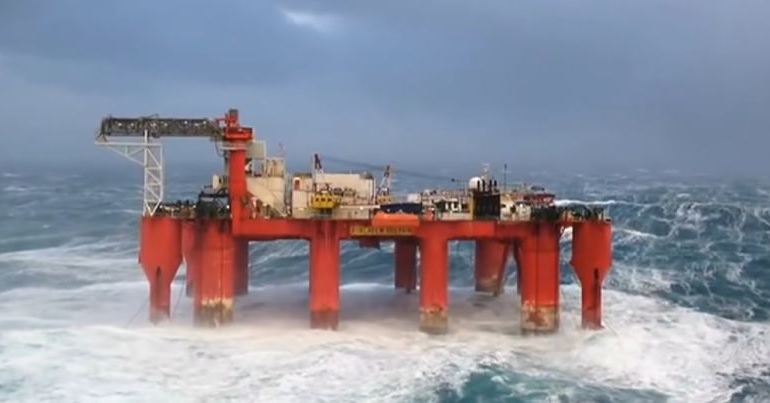 The fossil fuel industry used to deny that climate change was a thing, or that it had anything to do with it. With so much of the world now literally on fire, however, that argument no longer washes. So the industry has taken to what’s known as ‘greenwashing’ to protect its bottom line. Amid an avalanche of criticism over a planned new oilfield in the North Sea, the CEO of Oil and Gas UK (OGUK) has provided the perfect illustration of what greenwashing looks like.

According to Deirdre Michie, the Cambo oil field “will actually help the UK cut its carbon emissions”. That’s right, apparently expanding fossil fuel production is an answer to the climate crisis.

Michie laid out her argument in the Scotsman. It was nuanced, as all good greenwashing is, but it was largely centred on the notion that “the UK will still need oil and gas for decades to come” to fulfil its “energy needs”. The OGUK CEO argued that to meet that “need” the country will have to import dirty energy with high emissions from overseas if it doesn’t litter the North Sea with more oil rigs.

The Scotsman published a counter-argument article the following day. Written by the Scottish Greens’ Ariane Burgess, it drove an inconvenient wedge through Michie’s core argument, saying that:

As a Twitter user pointed out, even the International Energy Agency (IEA), which typically produces analysis that is fossil fuel industry-friendly, has called for limiting the exploitation of new sources of fossil fuels:

The International Energy Agency, the world’s leading energy organisation, has stated that there must be no new fossil fuel exploration if we want to avoid dangerous climate change. Surely they should have more authority than someone whose sole objective is profit.

Michie argued that the Cambo project is not “new” and that its “exploration licence was granted back in 2001”. However, some experts have asserted that much of the fossil fuel extraction already planned or underway needs to halt if we are to limit global warming.

Essentially, just because the UK government gave the project a thumbs up back in 2001, that doesn’t mean it can or should ignore the current climate-related flames around the world and carry on regardless.

Michie also failed to point out a critical fact related to her core assertion. Not all oil produced in the UK stays in the UK. In fact, the country became a net exporter of oil in 2020, when taking petroleum products into account too, for the first time in a decade. That means it exported more than it imported. The trend appears to be continuing with government statistics showing that in the first quarter of 2021, “the UK exported more primary oils than it imported for only the second time since 2005”.

Funnily enough, though, the OGUK CEO didn’t argue for the government to ban all oil exports moving forward. In fact, she didn’t mention exports at all. Banning exports would also limit the ‘need’ for imports of emissions-heavy oil from elsewhere. But of course, it’s not in the fossil fuel industry’s interest to call for bans on trade.

The whole idea of the ‘energy needs’ of the UK deserves scrutiny too. Energy use is closely linked to another prominent ‘need’ in the UK – one that’s built into the economic system itself. It’s the ‘need’ to constantly expand that is at the core of the capitalist system, otherwise known as the never-ending and holy grail of economic growth (just for growth’s sake). But this economic system has caused the climate and biodiversity emergencies we are in, so its irrationality is now glaringly apparent. That’s why a number of reports have landed on the UK government’s desk this year calling for its overhaul.

So no, the expansion of fossil fuel exploitation isn’t an answer to the climate crisis. System change is.