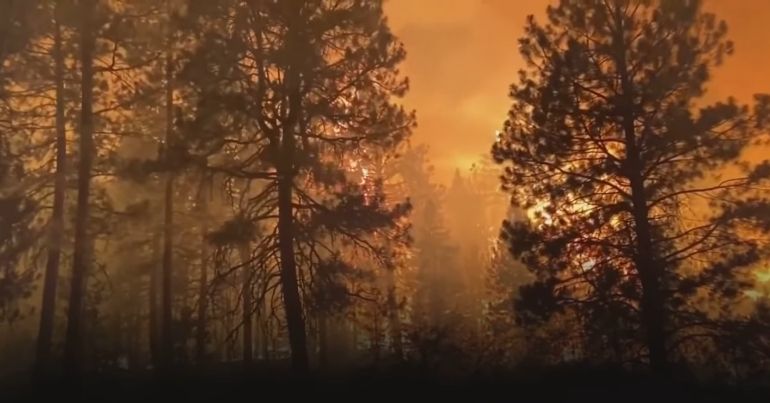 There’s no need to venture abroad and end up in quarantine right now – I’m getting all the blistering heat of the Mediterranean right now in my back garden in the North of England.

The UK saw its hottest day of 2021 at the weekend as temperatures soared, leading the Met Office to issue its first ever extreme heat warning. Elsewhere in the world, temperatures and weather are hitting even more worrying heights.

While this country gets off relatively easily with its heatwaves, the cataclysmic effects of the climate crisis are becoming more and more apparent as extreme weather events become a regular fixture in the headlines.

And it’s become increasingly clear that whittling away at decade long emission targets isn’t going to cut it.

The west on fire

In the west of America, forests are currently burning.

The Bootleg fire in Oregon is the largest of them, and one of the largest in Oregon’s history, and it’s expanded to cover an area half the size of Rhode Island. Thousands have been evacuated and firefighters have faced dangerous conditions as they attempt to put out the erratic flames.

This is only one of 70 wildfires that were burning across the west on 17 July.

Climate change has caused the region to become hotter and drier over 30 years, and with that has come an increasing amount of less-containable wildfires.

In Canada, hundreds died at the beginning of the month in a vicious heatwave in British Columbia that saw fires break out across the Pacific Northwest.

Along with western America, western Canada is now in its fourth heatwave in five weeks, and the fires are continuing to burn.

In Jacobabad, Pakistan summers now reach 52 degrees, which is hotter than the human body is built to withstand – and scientists estimate it could get hotter.

So as global warming promised, it’s already dangerously, terrifyingly hot. But the climate crisis isn’t just driving up the heat – it’s causing an increase in the frequency and intensity of extreme weather events around the world.

Within only 48 hours in Germany last week, areas near the Rhine experienced nearly twice as much rainfall as they usually do in the whole of July.

As a result, floods ravaged tens of thousands of homes, killing at least 58 people.

Their intensity and size was beyond what climate scientists had predicted, leading to concerns climate change’s effect on extreme weather is accelerating faster than we thought.

All of this has happened just within the last couple of months. Beyond that, extreme weather events have significantly increased during the last 20 years.

Zimbabwe and Mozambique were the most affected in 2019, after an intense tropical cyclone hit them and Malawi. Over one thousand people died, and three million were impacted. Residents who survived were left homeless, many of their livelihoods ruined.

And the future looks no less bleak – a UN report in 2019 warned of a coming “climate apartheid” as rich people find ways to protect themselves from extreme weather and leave the poorest to suffer.

So, what are we doing?

We have the Paris Agreement – accords signed by 196 countries pledging to limit global warming to 1.5 degrees.

But despite that, we remain tied to fossil fuels. UK councils have invested nearly £10bn into fossil fuels through pension funds; Brazil continues to decimate the Amazon, and Norway has given gas and oil exploration rights to 30 companies including Shell.

Climate scientists have already warned current global policies wouldn’t be up to scratch even if we met them, and could very likely see the planet warm by more than two degrees.

There are whispers of phrases like ‘green new deal’ and ‘green recovery’, because adding green in front of something is a quick way to make us all feel like we’re doing something.

It’s fairly clear the once seemingly far-off effects of the climate crisis are already here. If the apocalyptic flames in the west right now aren’t evidence enough, the Amazon rainforest now officially emits more carbon dioxide than it absorbs.

We need quicker divestment from fossil fuels, so we can cut emissions by the drastic amount needed. We need to work to reduce deforestation and forest fires, switch to electric vehicles more quickly, and yes, recover from the pandemic by creating jobs in green industries and investing in renewable technology.

Even with all this, particularly in the west, we’re going to have to accept and make the effort to change our individual lifestyles to reduce emissions where possible – change needs to happen both structurally and individually.

We’re hosting COP26 this year, which has instructed countries to update their emissions plans to get back on track for 1.5 degrees warming.

This is the chance for world leaders to recognise the world is already burning and commit to real actions. If they don’t, and continue fanning the flames, it’s the world they’ll have to answer to.