Crowded boat carrying two babies just makes it safely to shore. But the Sun only cares about ‘shocked sunbathers’. - Canary 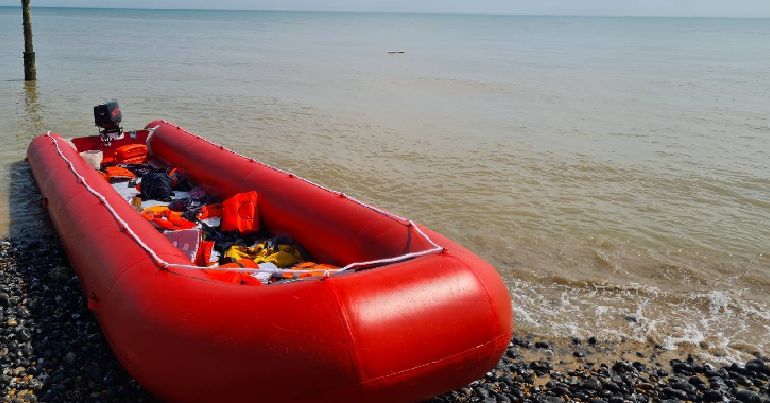 On 19 July, a record 430 refugees crossed the Channel in search of safety. Sadly, the first encounters many of them had on Kent’s beaches were aggressive and threatening.

6,000 people have embarked on the perilous Channel crossing in the last 6 months and hundreds of refugees have died trying to cross since 1999.

Steven from grassroots group Channel Rescue told The Canary that their volunteers had been able to help guide one of the boats that was heading towards some rocks outside Kingsdown to safety. Steven told us:

Basically we were spotting ships, we noticed a small vessel heading towards some rocks. We got the attention of some people on the vessel and directed them safely to the shore

This boat was filled with adults & families, inc. at least two babies, who in desperation, have risked their lives to seek safety on UK shores. Our volunteers spotted the boat heading towards some rocks & luckily managed to direct them to safety, greeting them at the shore. pic.twitter.com/CTkeDt20fO

Steven told us that they helped pull the boat ashore at Oldstairs beach in Kent. But they were greeted aggressively by people on the beach. Channel Rescue Tweeted:

2/2 Once the people on the boat reached the shore our vols went to greet them and were accosted by a number of people shouting and behaving in a hostile way. Our vols then made a statement about what they had witnessed to Border Force #SafePassage #ChooseLove

People were aggressive, videoing us – calling us ‘people smugglers’ – shouting at us and the people on the boat

It was only myself and another volunteer who were trying to assist, everyone else was shouting and being disruptive

Steven told us that the boat – which only had a very basic motor – was carrying 20-30 people including two babies.

We asked Steven why Channel Rescue’s onshore response work in Kent is important. He replied:

Refugees crossing the Channel are risking their lives in an attempt to seek sanctuary in the UK. However, mainstream media reports showed no concern at all for the welfare of people arriving.

The Sun reported the landing at Oldstairs beach without mentioning the risk the refugees were taking to make the crossing, or the disaster which could have taken place had the boat hit the rocks. Instead the Sun’s coverage focused on the “shocked” sunbathers, and reports that the “police were called”, feeding into the narrative that those arriving are criminals. Channel Rescue responded angrily:

Thank you @TheSun for your heartless and unfair reporting once again 👏 find out what actually happened here https://t.co/sQLzAo51Rx https://t.co/0VtO0XFFye

According to Steven the mainstream media reporting about the channel crossings is mostly “negative” and “inaccurate”, feeding into a narrative that seeks to “penalise people for seeking sanctuary”.

Steven pointed out that the Sun’s article mentions that people were taken for “processing”. He commented:

This is dehumanising language. You process food, but these are people.

This kind of language kicks people when they’re down. Politicians and the mainstream media talk about people as if they were illegal, and this bleeds into the general public’s opinions too. The government is doing this intentionally, to create a ‘hostile environment’ [for refugees]

The Canary contacted the Sun for a comment on its one-sided reporting, but we received no reply.

Of course, the narrative played out in the mainstream media is just a reflection of the government’s rhetoric, which is aimed at criminalising those that make the crossing to the UK. Priti Patel has announced that she plans to make crossings to the UK “unviable“. The planned Nationality and Borders Bill aims to further criminalise those seeking asylum in the UK. The government has also announced this month that it wants to detain asylum seekers in offshore centres such as disused ships or oil rigs.

We need to counteract this hateful rhetoric

We need to stop listening to the hateful rhetoric which is being weaponised against refugees by the government and in the mainstream media. This atmosphere of hatred and criminalisation is being whipped up intentionally. But ordinary people can organise to support those arriving on Kent’s beaches and those who are suffering as a result of the government’s hostile environment policy.

One way to do this is to support the work of Channel Rescue. The group’s aim is to provide on-shore support for refugees crossing the channel and to monitor the activities of Border Force. Steven told us that they do this by monitoring remotely from the clifftops of Kent. The group also has a boat to help monitor from the sea. Steven explained that the group needs support:

Steven told The Canary that the group hopes that its “human-rights monitoring” will help to detect if the British state is using ‘push-backs’ to stop refugees reaching the UK. Push-backs have been used widely in the Mediterranean to prevent boats from reaching European shores, but the practice is dangerous and potentially illegal under international law.

Steven told us that the answer is to facilitate ways for refugees to safely enter the UK:

There is an urgent need for safe and legal routes to the UK. No one should feel they need to make the treacherous journey across the Channel.

Unfortunately, the government’s dangerous and uncaring policies mean that many more people will be forced to risk their lives getting to the UK. It’s up to us to welcome them, and set up grassroots-controlled infrastructure that is ready to support them.