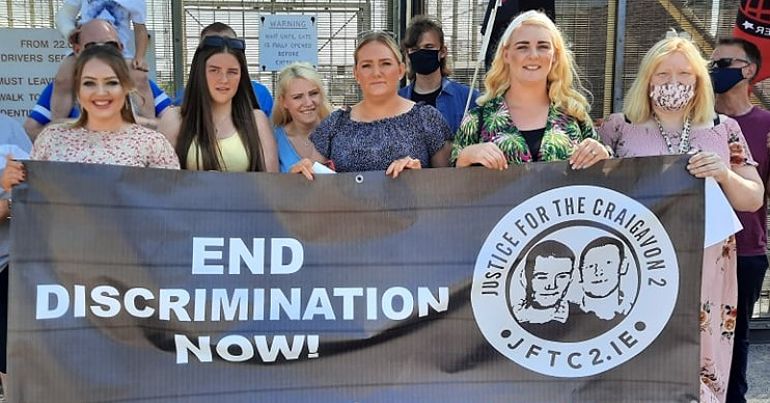 On Sunday 18 July, members of the Wootton family, supported by the Industrial Workers of the World (IWW) trade union, held a protest at Maghaberry Prison. They did so to highlight the “ongoing discrimination directed at their son, John Paul Wootton”.

As reported by The Canary, Wootton is one of the Craigavon Two. Both he and Brendan McConville have been in prison for 12 years for the killing of PSNI constable Stephen Carroll. They claim they’re innocent and they’ve suffered a miscarriage of justice.

Discrimination on the inside

At the protest, Wootton’s mother delivered a letter of protest to the prison governor. Wootton’s family claim prison authorities have denied him:

many of the opportunities readily available to the other prisoners

Our purpose was to show solidarity and love to John Paul and call for an end to the discrimination to which he has been subjected by the prison authorities.

It is John Paul’s view that many of the problems he faces could be dealt with by transferring to [Magilligan] prison. However, despite the fact that he meets the prison service criteria, he remains in Maghaberry.

Roe House is the republican wing in Maghaberry prison. In 2017, Wootton left this wing to move to the non-political Quoile House. While inside, Wootton also decided to leave Irish republican politics:

Growing up in working-class Irish Republican areas, it was inevitable that I would be intensely exposed to that ideology and its propaganda. It claimed that all the ills in Irish society could be blamed on British state interference and that only an independent socialist state could offer a solution. The history, the romance, and the already strong presence in the community were hard to resist. I had found my answer.

Wootton said on entering prison, “my place naturally was among other” Irish republican activists. However:

Over the years of struggle, my political outlook matured and my understanding of concepts like liberty and domination deepened. I began to recognise that Republicanism had a very narrow view of the world and an entrenched authoritarian culture. I became convinced that any independent Irish state, socialist or otherwise, would be just as harmful as the British state.

So, after about 7 years of life as a Republican prisoner, I began to become uncomfortable with the Republican label. I delved in to more libertarian ideas and eventually embraced anarchism.

This was a difficult decision as I was leaving behind not only an ideology and culture I now fundamentally disagreed with, but also good friends and comrades.

So for the last two years, while still protesting his innocence, he’s been requesting a move to Magilligan prison. His family added:

This is a clear case of discrimination and we will not stand by silently. We [intend] to continue to support John Paul and his fight for justice as we have done for over 12 years now and we will continue that fight until he is freed and fully acquitted. We will also make every effort to ensure he is treated properly whilst being held by the state.

A spokesperson for the IWW Ireland said it took part in the protest:

to lend our voice and solidarity with our fellow worker John Paul, at a time such as this when he continues to face further discrimination at the hands of the state who have already wrongfully imprisoned him.

The Canary contacted the Northern Ireland Prison Service for comment but it stated that it “does not comment on individual prisoners”.