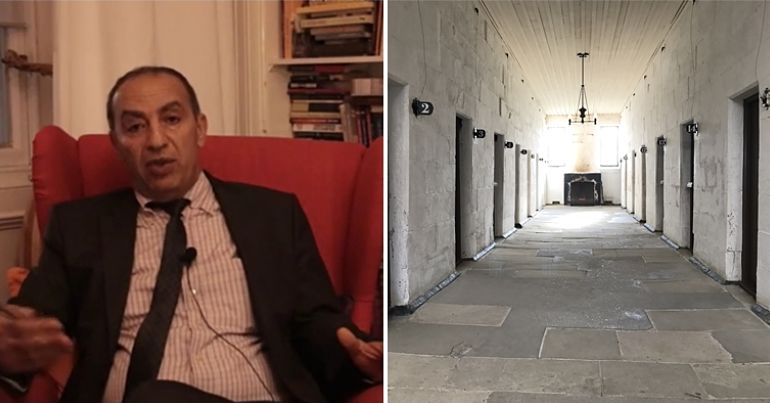 As reported by The Canary, republican prisoners went on hunger strike inside Maghaberry prison in Belfast on 16 September. This was to show solidarity with fellow prisoner and Palestinian activist Dr Issam Hijjawi-Bassalat, who began his hunger strike on the same date.

is becoming increasingly concerned for the welfare of Dr Issam Hijjawi Bassalat.

An IRPWA representative told The Canary:

There were further strikes in Dublin, Cork and Scotland yesterday carrying through until this [Sunday 27 September] afternoon as well.

[They] have now been joined by three female prisoners, Mandy Duffy, Sharon Jordan and Christine Connor who are all currently being held at Hydebank Wood College and Women’s Prison.

In a statement, the three women said:

We unreservedly support Issam in his hunger strike and his demand for immediate transfer to Republican Roe House.

Arrests outside the prison

There was a very heavy Crown Force presence outside Maghaberry as the camp was being established. British Crown Forces proceeded to remove two banners in support of Republican Prisoners. Four members of Éistigí, the Saoradh National Youth Movement, were also detained as Crown Force personnel became aggressive. A number of females and children in attendance were viciously assaulted with at least one minor leaving to seek medical attention.

The Canary contacted the Police Service of Northern Ireland (PSNI) for comment, but it didn’t respond by the time of publication.

On admission to Maghaberry Dr Bassalat spent 14 days in isolation as a COVID19 prevention measure. He was then moved to Maghaberry’s Roe House, where Republican prisoners are housed. He welcomed this move. Shortly afterwards he visited an outside hospital for an MRI scan. On return to prison on 16 September he was put back into isolation, which will last for a further 14 days unless the prison authorities change tack. At the end of this time he will have spent a total of 28 days in isolation, with only a very brief break. Dr Bassalat  went on hunger strike in protest at this treatment. The combined effect of his medical complaints and the hunger strike are now causing his friends and family serious concern.

The use of underhand tactics—including entrapment—by MI5 to harass Irish republicans and anti-imperialists is an abuse of power. If democracy and the rule of law mean anything, then this attempt to criminalise lawful political activity must be opposed.

Irish republicans and Palestinians share an anti-colonial struggle and they’re bonded by mutual solidarity, so it’s no surprise that Dr Issam Bassalat expresses support for Saoradh and the demand for a United Ireland.

I know Dr Bassalat as a colleague and ally in the political struggle for Palestinian rights. He’s very widely known and respected amongst people involved in that struggle in Scotland.

I’m extremely concerned by the involvement of MI5 in the investigation that led to his arrest, by the apparent long-term infiltration by MI5 of political activity in Scotland and Northern Ireland, and by claims made in court that Issam and his co-defendants were entrapped.

As reported by The Canary, hunger strikers and their supporters:

However, according to the IRPWA, there’s:

No word of Dr Issam being moved as of yet. The hunger strike will continue until [he’s] returned to Roe House.