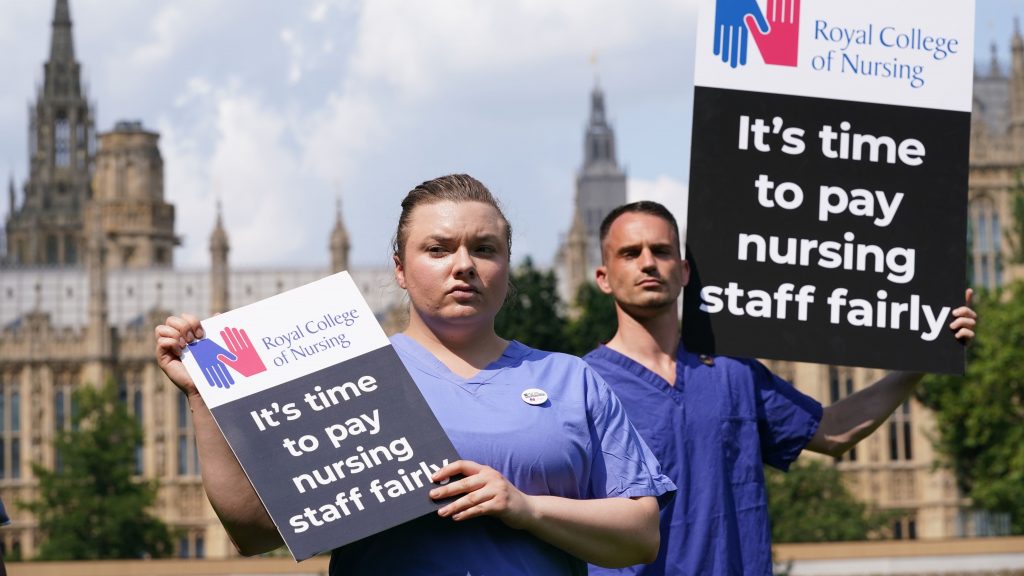 Health unions are to consult their members regarding industrial action following the “insulting” 3% pay offer for England. Nurses, paramedics, consultants, dentists and salaried GPs come under the new pay deal.

Pat Cullen, interim general secretary of the Royal College of Nursing (RCN), said the 3% was far below what was needed by nurses, who have worked throughout the pandemic and are facing serious staff shortages due to a high number of vacancies.

Asked if industrial action can be expected, she told BBC Breakfast

we will put that to our nurses next week in a consultative ballot and they will decide.

But, as their professional trade union, we will walk alongside them and their decision-making because nurses will do the best thing for patients,

Whatever action they take, they will make sure their patients don’t suffer as a consequence, the same way as they did in Northern Ireland two years ago when they took industrial action.

They did that for their patients and for patient safety and patient care, and they will do the same if they need to in any of the other countries, but they won’t do it at a whim, they will make measured and considered decisions, and we will work with them to make those decisions.

She said patient safety is being compromised in the NHS “as we speak” because “you cannot have the best, effective, quality patient care with 50,000 nurses missing from your health service every day”.

The shambolic announcement that was made yesterday is nothing short of insulting to our half a million nursing members that are going on shift as we speak today.

The disdain and contempt that our nurses were treated in yesterday, I think just goes without saying.

Cullen said the pay offer was “just short of £20 per week into a nurse’s pay packet” but added:

if we don’t actually do something to encourage our nurses from draining out of the health service – there are 50,000 nurses missing today from our health service and every other day – and when you do not have the nurses to look after patients, patient care and patient treatment is compromised.

Dr Tom Dolphin, a spokesman for the British Medical Association (BMA) and a consultant anaesthetist in central London, told Sky News that medics would also consider the option of industrial action. While consultants will get 3% under the deal, thousands of doctors, including all junior doctors, are under a separate 2% per year pay deal.

He said “over the last 10 years, our pay has fallen in value by about a third”, adding that exhausted doctors were leaving the NHS. Asked if workers would potentially consider industrial action, he added:

We’re not at that stage yet.

What we’re going to be doing is we’re going to be sending out a survey to our members today and over the next week or so, to check and make sure that they are as angry and disappointed about this pay offer as we are at the BMA and, if so, what they’re prepared to do about it.

And industrial action will be on that list of things they might want to consider, and we’ll see what people are prepared to do to defend their pay.

Elsewhere, the chief executive of NHS Employers said health leaders “have an enormous amount of sympathy for staff, and particularly with regards to how this… process of the pay award has been handled this year by the Government”.

It came after the Government was accused of “more chaos and confusion” after health minister Helen Whately made no mention of pay during her initial speech to the House of Commons on Wednesday.

A press release on the 3% offer was then put out later on Wednesday by the Department of Health.

In May, the Scottish government announced that a pay deal with an average increase of 4% would be immediately implemented. This came on top of a £500 thank you payment for health and social care workers.

On Wednesday evening, Wales announced it was following England with a 3% pay offer and has paid a bonus to staff in recognition of their work during the pandemic. Regarding England, the Department of Health said the “average nurse” will receive an additional £1,000 a year, while many porters and cleaners will get around £540.