Biden's first Guantanamo transfer is too little, too late. We need to shut it down! - Canary 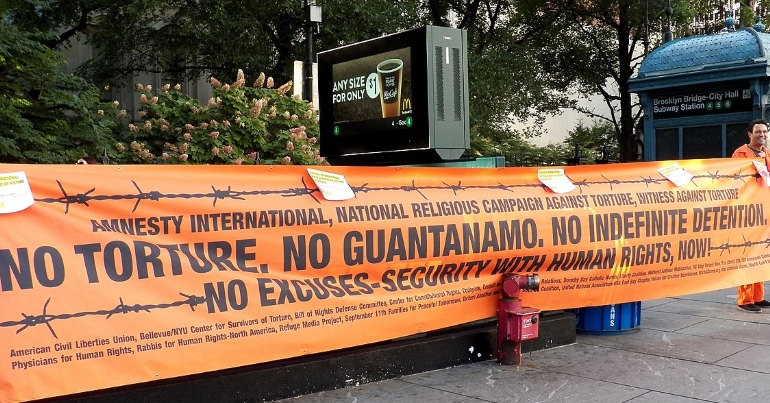 US president Joe Biden recently made the first transfer of a Guantanamo Bay detention center detainee since he entered the White House in January. To be clear, this should be welcomed. Guantanamo Bay has become perhaps the most enduring symbol of the excesses and kneejerk trampling over civil liberties that followed the September 11 attacks.

But we also need to state: this is too little, too late. Biden should not just be releasing all Guantanamo detainees but shutting the place down altogether. Moreover, the failure of former president Barack Obama to shut it down exposes how both major US parties cannot be trusted on civil liberties issues.

On the morning of 19 July, the Biden administration transferred the first of the remaining Guantanamo detainees that were left when Biden assumed the presidency. It repatriated Moroccan national Abdul Latif Nasir to his home country. The US Pentagon’s Periodic Review Board had determined that he didn’t pose a significant threat as far back as 2016. However, in an evasive statement the review board claimed that it was unable to repatriate him before former US president Barack Obama left office in January 2017.

In 2018, then-president Donald Trump reversed one of Obama’s executive orders that had pledged to shut down Guantanamo. When Biden entered the White House, 40 detainees remained in the detention center. The Biden administration is now indicating that it wants to shut Guantanamo Bay down altogether. Speaking to reporters on 19 July, White House press secretary Jen Psaki said, “we are considering all available avenues to responsibly transfer detainees and, of course, close Guantanamo Bay”.

We need to remain sceptical of the Democrats’ promises

To be sure, this is something to be celebrated. Guantanamo has been at the center of some of the worst human rights violations and trampling over civil liberties that were unleashed in the wake of the so-called ‘War on Terror’. Guantanamo, for example, has held suspects indefinitely without charge in violation of habeas corpus, one of the most central principles of modern law. Habeas corpus gives someone the right to be either be charged with a crime or else be released after a predetermined amount of time. Of the 780 men who have been incarcerated there throughout the years, nine have died while in custody. Some detainees, meanwhile, were subjected to torture, which flagrantly violates international law.

But the thing is, we’ve heard promises to shut down Guantanamo before from Democratic Party figures. During his campaign for the presidency in 2008, for example, Obama repeatedly promised that he would close the facility and release all remaining detainees. However, in spite of having had two four-year terms to shut it down, Guantanamo remained open when Obama left the White House in January 2017.

We shouldn’t be surprised, though. Because, as The Canary has argued before, when it comes to civil liberties issues, the US essentially has one center-right party (the Democrats) and one far-right party (the Republicans). And though the former is marginally better (especially when compared to Trump), Democratic administrations have nonetheless presided over some of the worst trampling over civil liberties and human rights in recent memory.

For example, in 2013 the Washington Post reported that the National Security Agency had:

broken privacy rules or overstepped its legal authority thousands of times each year since Congress granted the agency broad new powers in 2008.

Human rights activists must keep up the pressure

So clearly, as a Democrat who served as vice president under the Obama administration, Biden can hardly be trusted to follow through on his promise to shut down Guantanamo. Because Democrats have reneged on that promise before. And, moreover, their record on civil liberties and human rights more broadly is hardly exemplary, and, indeed, only marginally better than that of their Republican rivals.

Again, the release of any Guantanamo detainee should be welcomed. But activists must keep the pressure on Biden to follow through on his promise to shut the place down, or else that promise might end up turning out to be an empty one just like last time.