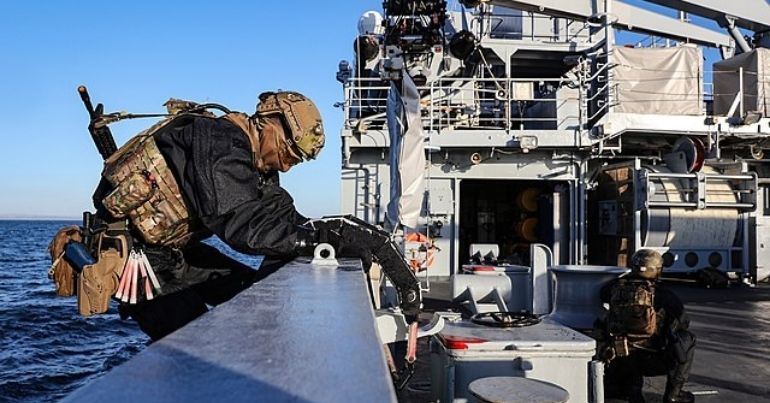 Two UK warships will permanently deploy to the Asia-Pacific region, the defence secretary Ben Wallace has announced. He said the UK would use the ships to carry out freedom of navigation missions. In practice, the UK wants to compete with China, the major regional power. Elite commandos will also deploy in the near future.

Wallace announced the decision in Japan. He had recently arrived from the US where he had toured military bases and made a series of speeches about cooperation and military plans.

Following on from the strike group’s inaugural deployment, the United Kingdom will permanently assign two ships in the region from later this year

The HMS Queen Elizabeth strike group Wallace referred to is currently en route to the region. It’s expected to start a series of military exercises with allies in the Indian Ocean on 26 July.

We reconfirmed our shared position that we firmly oppose attempts to change the status quo by coercion, and the importance of a free and open Indo-Pacific based on the rule of law

Both countries and the US are keen to limit Chinese power in the region. The three have become increasingly close in recent years.

Behind the rhetoric and posturing, the UK is also working on military deals with the US and Japan.

At the end of his US tour, Wallace and US counterpart Lloyd Austin extended an existing maritime and aircraft carrier cooperation deal. They also emphasised the “interoperability” of the two militaries. As was reported in April, the Queen Elizabeth carrier has more US than UK fighter aircraft aboard it.

Wallace’s comments on freedom of navigation are important. Only recently a diplomatic row developed over a UK warship sailing close to Crimea. As a result, Russian ships and aircraft buzzed the destroyer, which was in waters Russia considers its own.

As in the Asia-Pacific, the background was one of military deals. In that case, between the UK and Ukraine. The ship had BBC journalists onboard to record the incident.

A week later, a trove of secret documents was found at a Kent bus stop. Parts of these were published in the press. And they seemed to show that the UK had intentionally used the ‘freedom of navigation’ exercise to draw a Russian reaction for propaganda purposes.

The deployment, and those visits to Japan and the US, come amid what is termed the ‘Asia-Pacific tilt‘. The UK has decided to escalate its military activity in the region in a bid to counter China. While the main aim is to dominate the area, the new mission will turn a tidy profit for defence firms.