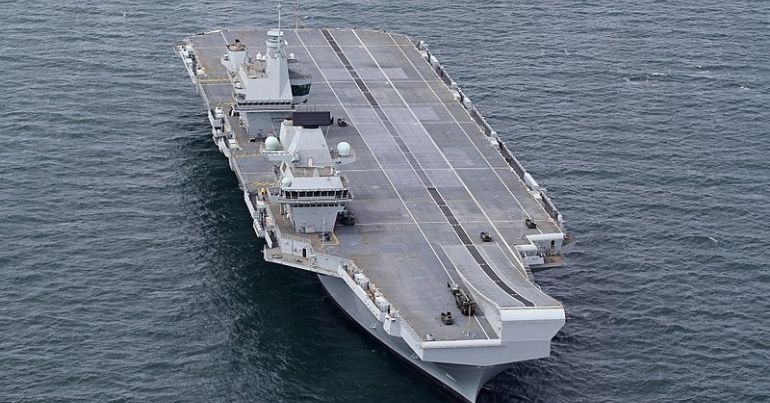 The UK government has confirmed that the Royal Navy’s new aircraft carrier HMS Queen Elizabeth will carry more US fighter aircraft than British ones.

Labour MP Kevan Jones tabled a Written Question to the MOD on 26 April:

To ask the Secretary of State for Defence, whether the majority of F-35s deployed on Queen Elizabeth’s voyage to the Indo-Pacific will be US Marine Corps aircraft.

HMS QUEEN ELIZABETH will embark 18 F-35Bs for CSG21 in two squadrons: eight from the UK’s 617 Squadron RAF and 10 from the US Marine Corps squadron VMFA-211. The Queen Elizabeth Class aircraft carriers are international by design and the fact they can operate a mixed US/UK air group is a strategic advantage, offering choice and flexibility to both nations.

This means that the majority of the F-35 jets on the UK vessel with be American, arguably bringing into question the UK’s status as an independent nation-state.

The First Sea Lord was quick to frame the matter as one of “potent” cooperation, rather than diminished power.

A potent symbol of international cooperation, CSG21 demonstrates the UK’s return to carrier operations in concert with our allies. HMS Queen Elizabeth will deploy with F-35 jets from the #USMC and the #RAF iconic Dambusters, visiting over a fifth of the countries in the world. pic.twitter.com/PI9J0Je0N0

The Queen Elizabeth, which reports indicate cost £3bn, is due to set sail from Portsmouth to the Asia-Pacific region in May. The mission will be its first operational deployment as part of a ‘strike’ group.

The Carrier Strike Group will set sail next month on its maiden operational deployment. This will be the largest concentration of maritime and air power to ever leave the UK.

Led by HMS Queen Elizabeth, the Strike Group will sail to 🇮🇳🇯🇵🇰🇷🇸🇬.https://t.co/g8mEfO6jJF

When our Carrier Strike Group (CSG) sets sail next month, it will be flying the flag for Global Britain — projecting our influence, signaling our power, engaging with our friends and reaffirming our commitment to addressing the security challenges of today and tomorrow.

The UK is not stepping back but sailing forth to play an active role in shaping the international system of the 21st century.

Global Britain is the UK’s new international strategy for the post-Brexit world. The revelation that most of the F-35 jets aboard will not be British, however, makes the UK look less like a confident and independent military power and more like the US Empire’s Uber driver.