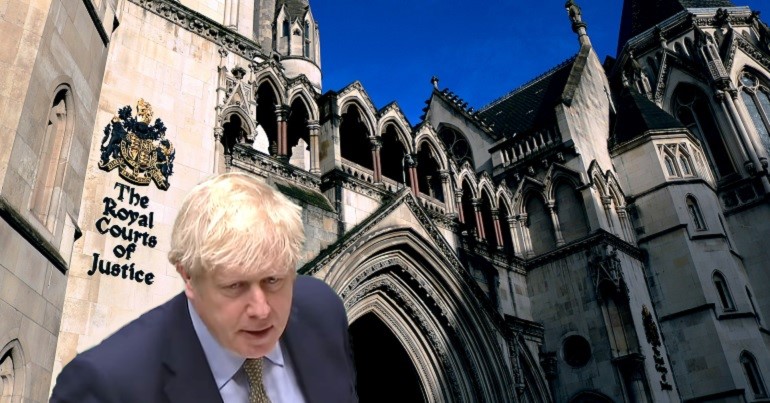 Three young people are taking legal action against the UK government over its failure to act to prevent the climate crisis. As the government has disputed the three claimants’ accusations, the court has beckoned for all parties.

Plan B is a charity which supports legal action to tackle the climate crisis. It’s previously taken the government to court over the climate crisis and the proposed Heathrow expansion. Now, it’s launched a new action.

The Government knows full well there is an unprecedented threat to all our lives, with young people and the Global South on the frontline. It knows recovery from COVID-19 presents a one-off opportunity to avert disaster.

The Government’s complicity is a violation of its legal duties to our planet, our generation and our communities (including the right to life and the right to family life, the Paris Agreement and the international law duty to prevent harm).

We do not consent to these violations. That’s why we are taking legal action. To fight for our right to life – and for yours too.

But it’s not Plan B that’s directly bringing this legal action.

The group said in a statement that on 1 May:

three young people, Adetola Onamade, 24, Marina Tricks, 20 and Jerry Amokwandoh, 22, working with the climate litigation charity Plan B and the Stop The Maangamizi Campaign, commenced legal proceedings against the prime minister, Boris Johnson, the chancellor, Rishi Sunak and the energy minister, Kwasi Kwarteng, over the government’s failure to honour its Paris Agreement commitments.

Since the lives and future of the claimants depend upon implementation of the Paris Agreement, that failure breaches their rights to life and to family life, which are protected by Articles 2 and 8 of the European Convention on Human Rights (ECHR). While the government’s climate failures threaten us all, as young people, with families in the Global South, the Claimants are exposed to disproportionate and discriminatory impacts and risks: the government’s complicity in the climate crisis also breaches ECHR Article 14.

Ahead of the UK’s presiding role at the critical UN climate talks in Glasgow (COP26), the claim lays bare the dishonesty of Boris Johnson’s claims to “international climate leadership”.

Plan B has previously warned the government that it believes it’s breaching its obligations under the Climate Change Act 2008, and specifically its carbon target for 2050. It also said the government was failing to “keep pace” with the Paris Agreement on climate change.

So why is the group bringing this action now? It seems to be a clear-cut case of the government doing literally the bare minimum to prevent the climate crisis. Specifically, they say the government is breaching articles two, eight, and 14 of the European Convention on Human Rights. That is, the rights to:

But the devil of the claim is in the detail.

In December 2020, Plan B formally announced its legal challenge. It wrote to Johnson and Sunak informing them of its case. In short, Plan B’s climate crisis case claims:

the Government has failed to take practical and effective measures to:

It’s these failures which have resulted in the claimants arguing that the government has breached theirs, and others, human rights.

‘Nothing to see here’

In mid-January the government responded, dismissing Plan B’s accusations over the climate crisis. You can read its full response here. It called the group’s claims “manifestly false”; “ill founded”; said there was “no substance” to one point, and that overall the claim was “totally without merit”.

But the government’s cries of ‘nothing to see here’ ring hollow. Not least because a parliamentary committee just recently slammed its lack of meaningful action.

The public accounts committee report focused on tax and its potential as an “instrument” for achieving the government’s climate goals. The government has pledged to ensure the UK reaches net zero carbon emissions by 2050, with a 78% cut by 2035. These emissions, which are largely the result of burning fossil fuels, are driving global warming. So ending fossil fuel combustion is key to limiting how catastrophic the climate crisis will get.

The committee, however, found that the Treasury and HM Revenue and Customs (HMRC) couldn’t “explain clearly to us how the tax system is used in achieving the government’s environmental goals”. Additionally, the government appears to have few plans on how to manage the impact of its climate policies on tax revenues, the report said. It raised, for example, the issue of a decline in fossil fuel tax revenues due to the necessary reduction in the use of dirty energy. Reining in the massive subsidies the UK dishes out to polluting fossil fuel companies could go some way to addressing this.

The committee also expressed concern over the fact that “immediate priorities have often outweighed action needed to support long-term environmental objectives”. It gave the fuel duty freeze in 2020 and 2021 as an example of such short-term thinking.

This is because part of what the group is focusing on is finance and policy. As Plan B noted in a press release:

The Paris Agreement requires finance flows to be aligned to the temperature threshold of 1.5˚C. To the contrary, a massive 15% of global carbon emissions are supported through the City of London, while the FTSE100 is heading for 4˚C warming.

The Paris Agreement requires countries such as the UK, which have historically contributed most to the crisis through their past emissions, to support those in Global South on the frontline. Instead, the Government has decided, at this time of global crisis, to cut vital supply lines of finance (ie. the repayment of carbon debt) from the communities most exposed to the impacts and risks.

In other words, the government is putting finance and profit before human lives, the planet, and its ecosystems. So, the group is moving forward with the case.

The outcome the group wants from the case is:

i) a Declaration from the Court that the Defendants’ failure to take practical and effective measures to meet their Paris Agreement commitments breaches the Claimants’ rights under the Human Rights Act 1998 (ECHR Articles 2, 8 and 14);

ii) a Mandatory Order that the Defendants implement, with appropriate urgency, a legislative and administrative framework sufficient to meet those commitments.

One of the claimants, 24-year-old Onamade, said in a press release:

We, as young people of the ‘Global Majority’, have witnessed the UK government fail to prepare and protect the most at risk in our communities who have disproportionately been on the frontlines of Covid-19. This is no different to the government’s flippant approach to the international risks of this climate crisis.

The UK, with its predominant wealth dependent on the fossil fuels of the Industrial Revolution, has a historic responsibility to transition its economy and to support others in adapting to do the same. It intends to repeat the crimes of colonialism and erasure of whole cultures, communities and families by not stopping the harm of current ‘extractivism’ in West Afrika, Asia and Abya Yala. Instead of delivering on the Paris Agreement commitments, the government is preparing, with our taxpayer money, for four degrees warming. It is complicit in the destruction that our friends and family in the Global Majority face daily and it cannot comprehend the societal collapse that four degrees would mean.

Instead of readying the people of the Global Majority most at risk in the UK, it has provided empty promises, rhetoric and miseducation ahead of COP26. It is constantly eroding our human rights and ability to defend them – through state violence; now in the form of the Police, Crime, Sentencing and Courts Bill [“Police Bill”] as well as preparing for eco-fascism through the Overseas Operations Bill. We will not allow this trajectory to continue, our families’ lives depend on it. Your global family’s lives depend on it.

But will the case get the claimants the desired outcome? Because the challenge for both Plan B and the young people involved is that we’ve been here before.

Plan B said in a press release:

The government has 21 days to respond to the claim. The High Court will then decide whether to grant permission for a full hearing.

It previously brought a case against the government over the climate crisis, but a judge effectively dismissed it. He rejected Plan B’s claims of human rights breaches. The judge said:

The Claimants do not identify any interference to which that decision gives rise, but only to the effects of climate change generally. The violation arises, it is said, because of the failure of the Secretary of State to take proper preventive measures. I reject this submission.

And herein lies the problem.

The law is an ass

As The Canary previously wrote, the “law is… an ass”. For many people, it’s obvious that the government has little regard for:

Yet legally, it’s not that simple. So it will once again be down to the judiciary as to whether Plan B and the young people directly affected are given a fair hearing. Or, whether the government will once more win out thanks to laws those in power have written.