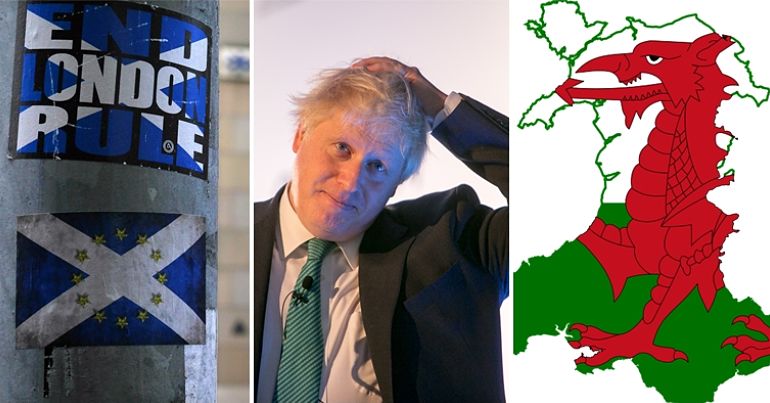 This is the final part of The Canary‘s #Independence2021 series before elections on 6 May. And it comes as Boris Johnson is embroiled in yet another scandal. Because of Tory corruption allegations, the truth about Johnson’s apartment refurbishment, and, well, Johnson just being himself, the Tories are once again on the defensive.

And in typical Tory and Johnson fashion, this “fervent and passionate unionist” wants to buy his way out of it. But it’s not working. And it’s especially not working in Wales or Scotland. Despite Johnson’s “spending spree to save the union”, independence parties are making gains. So this latest round of Tory scandal might just be the mess Johnson can’t bluster his way out of.

As reported by The Canary, Johnson completely lost his cool when answering questions about the refurbishment of his Downing Street flat. And despite his assertions, he wouldn’t answer whether he’d initially paid for the refurbishment.

Dominic Raab did nothing to clarify the situation on Sunday 2 May:

The PM has point blank refused to answer a simple, straight forward question. A question a five year old could answer. The result is 3 separate, time consuming & expensive inquiries to find the answer. Dominic Raab just told #SophyRidge the PM has answered the question “clearly!”

Dominic Raab refuses to say who paid the initial costs on the PM's flat, instead repeating the party fudge that Johnson "covered the costs", to hide the corruption.@SophyRidgeSky is BRILLIANT in this. 😍🤣 #Ridge pic.twitter.com/IDzlR9b5az

But by now people have become used to Tory scandal. And some see #Refurbgate as just another in a long line of examples of Tory corruption:

Dear @BorisJohnson, whether you misappropriated our money or not for fancy wallpaper and furnishings I and millions of others would like to know what happened to our money on the matters listed below.

Are you going to personally pay this back?I#TorySleaze #BorisOut pic.twitter.com/KmdqYM35Jd

An extensive but by no means a complete list of all the #ToryCorruption and #TorySleaze that show exactly why Boris Johnson shouldn't be Prime Minister.

Scandal upon scandal: the charge sheet that should have felled Johnson years ago Jonathan Freedland https://t.co/xkD2qe9chH

But try as the Tories might to wish this away, it’s not happening. So with pending elections in Wales and Scotland on 6 May, they’re trying to buy their way out of trouble with a billion-pound spending strategy for Scotland and Wales:

Boris plans ‘spending spree to save the Union’ over ‘fears of big gains’ for Plaid Cymru and SNP https://t.co/35RlGCTubm

They won’t launch this spending strategy until the election results are announced. So the strategy isn’t fully clear yet. True to Tory form. Apparently though, they’ll use the money to build transport infrastructure.

But that tried and tested method of Tory skulduggery isn’t cutting it with voters in Wales and Scotland. Because pro-independence parties Plaid Cymru and the SNP are reportedly on track to make big gains. So you could be forgiven for thinking Johnson’s spending announcement had an ulterior motive. In fact, it was so transparent even the Telegraph called it out:

🚨🏴󠁧󠁢󠁳󠁣󠁴󠁿 Boris Johnson is planning to spend billions of pounds on new road and rail links and treating Scottish patients on English NHS beds in a desperate counter-offensive against Nicola Sturgeon https://t.co/NM0jNX29lL

But rather than encouraging people to vote Tory, Johnson’s “spending spree” could have the opposite effect:

Looks like the way to get £billions from this Tory Westminster government for Wales is to vote for @Plaid_Cymru en masse. Let's do it! https://t.co/gkwnL4ZjdC

Boris plans 'spending spree to save the Union' over 'fears of big gains' for Plaid Cymru and SNP #VoteForWales #3VotesPlaidCymru 🏴󠁧󠁢󠁷󠁬󠁳󠁿 https://t.co/vxN3RcGKrZ

Including with some first-time voters:

Brexit pushing foreign and EU citizens towards SNP, via @conor_matchetthttps://t.co/eCKrVLjuK9

The SNP has been clear about its intention to hold a second independence referendum. And it’s getting ready to do so. Additionally, Plaid Cymru has promised a referendum “within five years” should it win a majority. But Tory corruption and scandal is also clear for voters to see.

So Johnson’s efforts to save the union look to be in vain. The drive for independence in both countries pre-dates Johnson, but this latest round of scandal and his “relationship with the truth” could be the beginning of the end for his precious union.