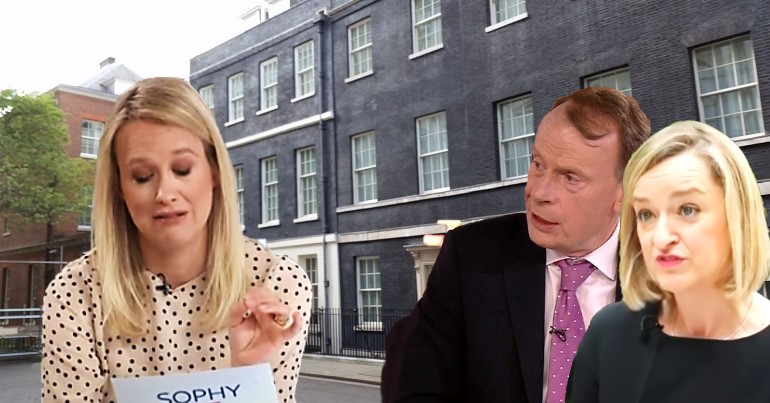 You know things are bad in the UK media when a journalist from a Rupert Murdoch-created news outlet puts the BBC to shame. But that’s exactly what happened on Sunday 2 May.

The story of Boris Johnson’s flat has been rumbling on. As The Canary previously reported, the Electoral Commission is investigating Johnson’s Downing Street refurb. During Prime Minister’s Questions (PMQs), the PM repeatedly claimed that he ultimately paid for the flat refurb. But Johnson wouldn’t say who stumped up the cash in the first place. The Canary also reported that Johnson said of the probe:

We will comply with whatever they want, and I don’t think there is anything to see here, or worry about.

Yes. The PM literally said there’s ‘nothing to see here’. Move along, now. But the press pack can smell blood. So, on 2 May, the issue of Johnson’s dodgy refurb was heavily in the media. But the coverage wasn’t all the same. Because Sky host Sophy Ridge did what the BBC failed to do.

Sophy Ridge on Sunday set the bar high. Well, high for the corporate press, anyway. She was probing foreign secretary Dominic Raab about ‘flat gate’. Ridge couldn’t help but laugh at one point. Raab was deflecting her question about who signs off on any investigation into whether Johnson broke the ministerial code over his flat. The answer is, of course, Johnson himself.

But Raab didn’t want to admit that. Hence Ridge’s amusement:

Sophy ridge is on fire today 🔥

She wanted to know who had the final decision on the outcome of the inquiries 😂#ridge #marr #ToryLiars pic.twitter.com/6tmtvYGaMK

Ridge cut through Raab’s BS perfectly. After he once again tried to dodge her questions, he said:

I think the prime minister’s been very clear

Ridge probably spoke on behalf of much of the UK when she said:

Oh right. The prime minister’s been very clear. I must have missed this. Because I believe the key question is who initially paid for the refurbishment of the flat. Has he been clear in answering that?

And of course Johnson hasn’t:

#Ridge – The Sunday Times has been told there was a 2nd invoice for the work carried out at No.10… is that true?

So, did Raab get such a pasting on the Andrew Marr Show? Not likely.

The host spent around one minute asking Raab about the issue. Marr posed two questions:

Raab failed to give coherent answers to either. And that was that. He probably breathed a sigh of relief, because Marr basically let him off the hook. Much like his colleague Laura Kuenssberg did with an article about Johnson and the “truth”. It didn’t go down well on social media:

Laura Kuenssberg’s article on Johnson’s ‘relationship with the truth’ is wild. No concrete examples, and odd attempts to excuse his behaviour.
I spoke to @PeterStefanovi2 & @carolinelucas recently who are actually interested in holding the PM to account. https://t.co/RgPl7cZrtw

Another Twitter user criticised Kuenssberg for not giving “any examples” of Johnson’s repeated and provable lying:

According to Laura K, he has "a complicated relationship with truth" and is a bit like Steve Jobs, but she can't find any examples of him actually *lying*

How can you call yourself a journalist if you can't find an example of Johnson lying?

Campaigning lawyer Peter Stefanovic had something to say about that:

But of course, there’s a broader point to be made about the media pile-on over Johnson’s wallpaper.

Who paid for his refurb costs is really the least of the PM’s crimes. As Sarah tweeted:

Something is seriously wrong when wallpaper might get you sacked but mass killing is acceptable.

Indeed. It seems that the corporate media would prefer to go after dodgy wallpaper than Johnson allegedly saying:

Because dodgy financial agreements over paint and soft furnishings are far more palatable than a PM who’d happily see his own citizens dead. And no amount of forthright journalism from Ridge, or limp questions from Marr, should detract from this.