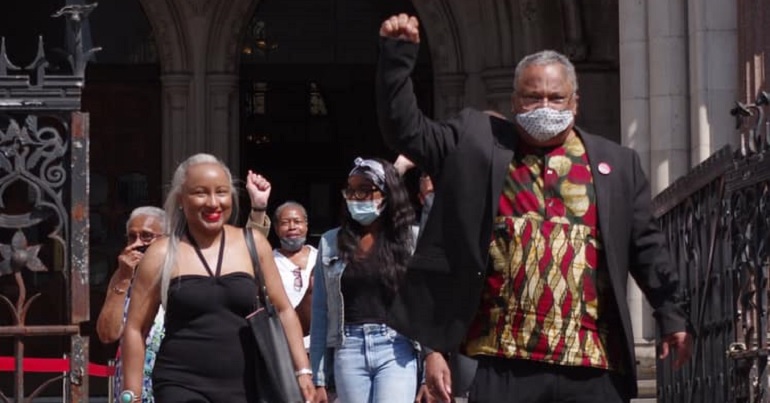 Black journalist, activist, and former Labour Party member Marc Wadsworth has just won a court case against the Jewish Chronicle (JC). But the story is merely a symptom of the illness. Because Wadsworth believes the ultimate blame lies with Labour itself.

Wadsworth is a civil rights campaigner, journalist, broadcaster, author, and lecturer. He founded the Black-led Anti-Racist Alliance in 1991, Europe’s largest movement of its kind, and is the editor of citizen journalism website The Latest. In March, the JC claimed he was involved with a group that:

The Labour in Exile Network (LIEN) vowed to unearth the “identity, location, activities and associations” of Jewish activists from the campaign group Labour Against Antisemitism (LAAS).

The JC stated that Wadsworth spoke at LIEN’s online launch event. But none of its claims about him were true.

As a press release from his lawyers, Carter-Ruck, stated:

Mr Wadsworth had never been involved in or supported the appalling activities alleged by the article. Nor had he been a member of or involved with the group to which the article referred, or attended its launch event.

Wadsworth took the JC to court, and On 22 July, he won his case. The JC had already admitted the story was wrong, published an apology, and agreed to pay Wadsworth damages.

In our issue of 12 March, we reported that Marc Wadsworth had spoken at the launch event for the ‘Labour in Exile Network’ (LIEN), a group that aimed to discover the addresses of Jewish Labour activists to “take care” of them, and that he was thereby complicit in a conspiracy to intimidate, threaten or harass Jewish activists into silence. We also suggested that there were reasonable grounds to suspect that such activities were criminal. Our story was wrong. Mr Wadsworth did not speak or even attend the online event. Mr Wadsworth is not a member of LIEN and we accept that he has not been involved in any of the group’s activities. We apologise to Mr Wadsworth for our error and have agreed to pay damages to him.

A long line of misdemeanours

But as SKWAWKBOX reported, this is not the first time the JC has lost legal a legal case. It noted that Wadsworth’s case was:

the latest in a string of untrue claims for which the Chronicle has had to pay damages and/or apologise – including significant compensation for a ‘litany of lies’ against Liverpool pensioner Audrey White, accusations of antisemitism against a Muslim woman councillor and ‘utterly untrue’ allegations of terrorism against a Palestinian aid charity. The paper was also heavily criticised by ‘regulator’ IPSO for its articles about Ms White and for its failure to cooperate with IPSO’s investigation.

LIEN also had something to say about the piece. The JC claimed that LIEN:

vowed to unearth the “identity, location, activities and associations” of Jewish activists from the campaign group Labour Against Antisemitism (LAAS).

The announcement came during the online launch event for LIEN

The group said it would target the Jewish members in order to take “action against the individuals”, referring to them as “Zionist trolls”.

Details of the “anti-Zionist action network” were posted on its website.

LIEN said in a counter-argument that:

The statement added that LIEN:

abhors all forms of racism, including antisemitism and campaigns against the conflation of anti-Zionism with antisemitism.

Using a photo of Jackie Walker suggests to readers she was instrumental in the story you have published. [She] has no connection at all to this and we ask you remove her photo immediately.

While Wadsworth is pleased with the verdict, he believes that the Labour Party is ultimately to blame for the story. He told The Canary:

The Labour Party turned me into a media target by unjustly expelling me in 2018. I have had to endure trial by media since the party suspended me in 2016. My #Justice4Marc reinstatement campaign has received huge support since, including from Jewish people and many others. I am an ally of Jews, Palestinians and all other oppressed people and will defend my reputation as a life-long anti-racist campaigner against any media that libels me, as I have done successfully in this instance. The witch hunt against the Labour left, accelerated by the current leadership, must be halted by any means necessary. I am very grateful for the huge amount of support I’ve received on social media since the JC public apology in court yesterday.

Bigger than just the JC

The story gets to the heart of the current situation in the Labour Party too. In an attempt to first destroy Jeremy Corbyn, and then his legacy as Labour leader, the party machinery is doing everything it can to purge left-wing members from its wings. And while from the outside this may look like an internal battle, in the case of people like Wadsworth the implications of a world away from the Labour Party can be devastating.

It’s a victory that the JC has apologised. But the battle against the demonisation of people with left-wing views continues regardless.