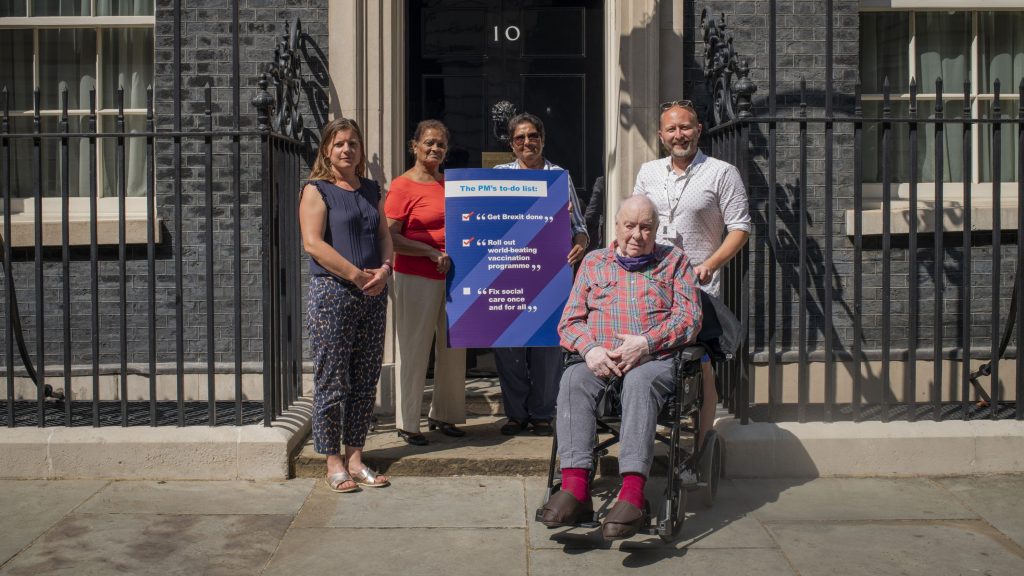 Charities say they will continue working to make sure the government doesn’t “forget the commitment it has made”. This is in reference to the prime minister’s promise to fix the social care crisis, made exactly two years ago.

Age UK analysed data from NHS Digital. It said local authorities in England have turned down some 1.4 million requests for care from older people since Boris Johnson’s historic pledge. This equates to nearly 14,000 people aged 65 and over a week not getting the vital care and support they believe they need.

In 24% of these cases, the local council found they didn’t meet the eligibility criteria for social care support. And 26% were referred to other services after being found ineligible, Age UK said.

Exactly two years ago, in his first speech after being elected in July 2019, Boris Johnson told the public:

we will fix the crisis in social care once and for all with a clear plan we have prepared to give every older person the dignity and security they deserve.

No such plan has yet been published.

There had been widespread expectation that proposals would be put forward before the summer. But the three main players who would be involved in the decision – the prime minister, chancellor, and health secretary – are all self-isolating.

“Let down once again”

Ahead of the anniversary of the PM’s speech, Age UK handed in a letter to Downing Street. It urged Johnson to honour his promise.

Caroline Abrahams is charity director at Age UK. She said:

After all the recent media stories suggesting that the Government wanted to make an announcement about its social care proposals before recess, it is very disappointing to have been let down once again. The fact that we are all now thoroughly used to being led down the garden path doesn’t make this latest disappointment any easier, especially when we consider the damaging impact on older people and their loved ones.

These constant Government delays carry a cost, and our new statistics show it is one paid above all by people who need care, vast numbers of whom are turned away when they approach their council for help.

It’s easy to blame local authorities when this happens, but the responsibility lies squarely with central Government.

She also made clear:

I can certainly assure you that Age UK and other like-minded charities will be working hard to ensure the Government doesn’t forget the commitment it has made.

The Alzheimer’s Society said it was frustrated that social care reform announcements weren’t made before the parliamentary recess. James White, head of public affairs, said that:

while dementia isn’t curable yet, the care system is.

The pandemic has exposed our mess of a social care system like never before. At least 34,000 people with dementia – by far the largest users of social care – have died and many more have dramatically deteriorated.

This wasn’t an inevitable situation, but a structural failing.

However, the social care system is funded, its reform must be delivered, with proper investment in the sector.

Martin Green, chief executive of Care England, told the PA news agency that solving the crisis facing social care will also help the NHS and strengthen the government’s alleged agenda to ‘build back better’. He said he was disappointed by another delay. And he urged the government to prioritise reform when parliament returns from recess, adding:

It’s probably the most serious it has been for many, many years. And what we will see is some services exiting the sector, and partly that will be about funding, but it will also be about the fact that social care was on the frontline of a pandemic, and people are exhausted.

So that’s why we need a plan for social care that will refresh people and give them some confidence in the future.

It’s more urgent now than it has ever been that the Prime Minister fixes the social care crisis and provides significant funding, but he must not forget working-aged disabled adults.

This is a once-in-a-generation opportunity to transform social care and to create a social care system that is fit for the 21st century.

Dying people do not have time to wait and we would urge the Government to prioritise fixing the crisis in social care as promised time and time again.

A spokesperson said the government is committed to reform and will deliver proposals later this year. Despite the two-year wait and failure to reveal the plan Johnson claimed was already “prepared”, they claimed:

It is our priority to ensure that everyone receives the right care whenever they need it.

Local authorities are responsible for assessing an individual’s eligibility for support and the plans we have already set out in our Health and Social Care Bill will ensure everyone has access to high quality care.