As infections rise, the Tories are calling it a 'pingdemic' and putting workers at risk - Canary 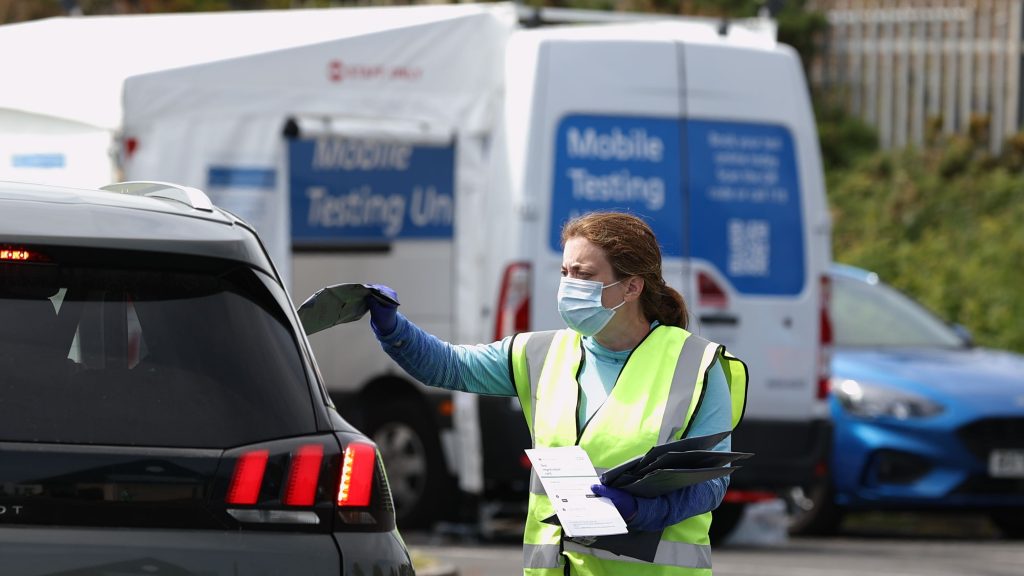 The government has expanded its workplace testing programme to an initial 200 sites for frontline emergency services personnel. It comes amid criticism of the government’s self-isolation policy. While some are criticising that, however, others are criticising the framing of what’s being called the ‘pingdemic’.

It's not a #pingdemic, it's a pandemic. The app telling people to self isolate wouldn't ping so much if the infection rate wasn't skyrocketing. The problem is the rising number of infections, not the app.

This is not a ‘pingdemic’.

This is a highly infectious & dangerous disease being allowed to run rampant through the population.

Some police, firefighters, Border Force staff, and transport workers were already eligible for a self-isolation exemption. But that was only if their employers specified their names and they were double-jabbed against coronavirus (Covid-19). On 24 July, the government said that an expected initial extra 200 testing sites would be opened so that daily contact testing could be “rolled out to further critical workplaces in England”. They’re not expected to open until 26 July at the earliest.

Daily testing will keep our frontline teams safe while they continue to serve the public and communities across our country.

The expansion came after the government announced a new programme on 22 July. It would allow thousands of workers at up to 500 sites in the food sector to avoid self-isolation if identified as a contact of a coronavirus case. They would have to take daily tests instead.

Pressure from organisations has mounted on Downing Street to bring forward the date at which people who are double vaccinated against coronavirus can avoid self-isolation. There were also increasing calls for Boris Johnson to bring forward his wider relaxation of quarantine rules for the fully vaccinated from 16 August. They came as businesses were hampered by staff being told to isolate because of soaring coronavirus cases.

The British Medical Association said the problem was not the “excessive pinging” of the NHS Covid-19 app but that the government’s coronavirus strategy has caused “rocketing case numbers”.

lack of effective measures by Government that is allowing the virus to let rip throughout the nation.

Call it a “pingdemic” if you like but it’s still an uncontrolled pandemic. Playing with words only fools humans not viruses…

On 23 July, the Times reported that although some workers may get exemptions that allow them to work, they’ll still have to self-isolate at home:

Key workers who are exempt from quarantine will still have to adhere to the normal isolation rules when not at work, the government has said.

Ministers announced last night that emergency measures to protect food supplies will see thousands of workers in critical areas such as supermarket depots and food manufacturing avoid the need to self-isolate if pinged or contacted by a test and trace official.

The news drew some confused responses on social media: 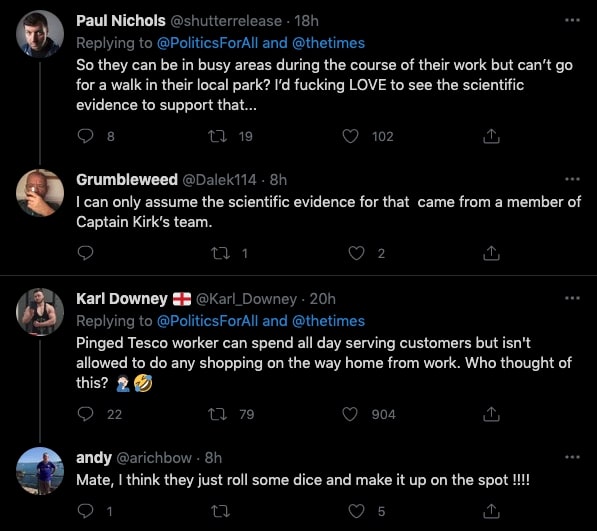 So in a bid to appease bosses, the government is letting people avoid self-isolation for their jobs only. Unfortunately, the virus doesn’t clock in or out. A potentially infectious person will be as infectious during work hours as they will after work.

Empty shelves are being blamed on the '#pingdemic'. If only there had been a major disruptive event that had affected the UK & impacted supply chains that could explain it more logically instead…*@BylineTV's @CaolanRob's got the evidence 👇

According to Byline Times:

At first, individual business owners spoke of facing issues with exporting due to the paperwork created overnight by the UK’s change in customs status or struggling to find a market within the UK to make up for lost trade to the EU. Lorry drivers and shipping managers began to warn that we would see empty supermarket shelves because of a disastrous mix of new customs regulations and a lack of drivers as EU workers left the UK.

The article goes on to discuss challenges with recruiting drivers:

At a truck stop just off the M4, I spoke to Laura Salt, operations manager at [a] logistics firm that supplies several UK supermarkets. “It’s been a nightmare to get drivers,” she said, “we’ve had a lot of European drivers go back due to paperwork, it’s just a lot easier to go back. It’s causing chaos. Recently we’ve been having to say that we can’t cover the runs, can’t make the delivery. Before Brexit, it would never have happened.”

Liz Webster, a Wiltshire farmer who sells meat to Marks & Spencer, has said that while the pandemic has undoubtedly been a contributing factor, these issues began with Brexit – not the ‘pingdemic’.

“[The right-wing media] are trying to scapegoat the blame onto the Test and Trace ping system because they want to deflect the blame from Brexit,” she said today. “It’s a convenient scapegoat. The real problem at the heart of food shortages is Brexit. That’s it. No other country is having these issues. Supermarkets in France and Ireland are having no food shortages.”

The phrase ‘pingdemic’ has appeared on the covers of multiple UK newspapers:

Blaming the NHS app for "pingdemic" – what a ridiculous name – when it literally does what it's designed to do – alerting you to a close contact with someone infected with Covid – is beyond absurd.

The problem is not with the app, but with the rising number of new infections. pic.twitter.com/GUJYFEUO5y

In a bid to appease industry bosses, ministers published a limited list of sectors whose double-jabbed workers are eligible to avoid isolation if they undergo daily testing before the wider easing of rules for England. Industry leaders said the move didn’t include sufficient workers, but doctors warned the problem is that the prime minister has let the virus “rip”.

“The app is working as it should”, head of the BMA Council, Dr Chaand Nagpaul tells @fatimamanji.

He says the government's "lack of controlled measures” is the real problem, not the 'pingdemic'.https://t.co/qiEoad5ZBi

The mounting criticism came as data from the Office for National Statistics (ONS) showed coronavirus cases continued to rise. Around one in 75 people in England are reportedly infected. The estimate of the number testing positive – 741,700 – in the week to 17 July is the highest since the week to 30 January.