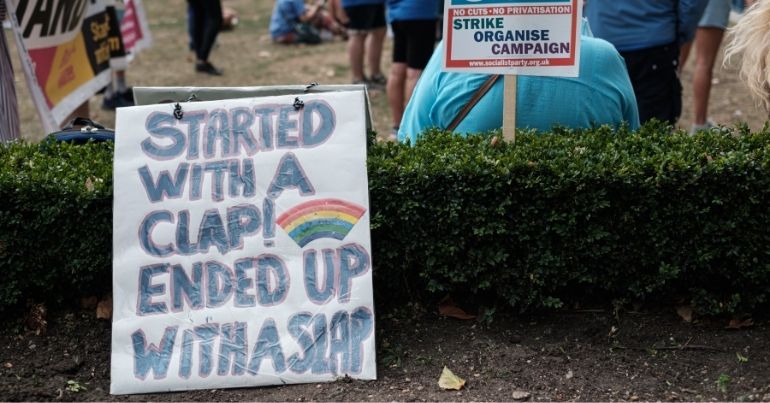 NHS workers and unions have responded to the government’s confused, last-minute announcement of an “insulting” 3% pay rise with outrage. After inflation, the proposed pay ‘rise’ amounts to about 0.6%. The government has left many NHS staff – such as junior doctors – out of the proposed rise in pay. This means that they’re getting yet another real terms pay cut.

Unhappy with the pay deal, nurses and trade unions are considering industrial action. As nurses and unions have highlighted, this really is a kick in the teeth after a decade of underfunding, privatisation, falling wages, and the coronavirus (Covid-19) pandemic.

On 21 July, health secretary Sajid Javid said that the merger pay rise should show NHS workers how much the Tories “value and respect their incredible contribution to our nation”. In a sense, he wasn’t lying. Responding to the government’s announcement, this parody Boris Johnson account summarised:

Nurses deserve more than the 3%,which is a pay cut. It would have been so helpful if the leader of the opposition had pointed out that they need more. Clapping doesn't magically end in-work poverty. #NHSPay15 #NHSPayRise

This isn’t a pay rise

The government’s last-minute offer of a 3% pay rise for NHS staff actually equates to another real terms pay cut. According to the GMB Union, in the past decade, NHS workers have lost up to £9k a year through real terms pay cuts. This comes alongside a decade of cuts and privatisation, overworked staff and understaffed services, and 18 months of a pandemic which killed hundreds of frontline health and care workers. Highlighting the profound injustice of the proposed pay ‘rise’, campaign group EveryDoctor shared:

And this government responds with 3%.

A 3% pay *adjustment* after over a decade of brutal austerity is an insult.

Solidarity with all NHS staff. We support you in rejecting this pitiful offer and in any action you take!#NHSPay15 @GMB_union @NurseSayNO @hollyjo12965882

1,561 NHS workers lost their lives during the pandemic. The Government has just announced a 3% pay rise for healthcare workers, which after inflation of 2.4% amounts to just 0.6% this year.

Our system is broken

If you think NHS staff deserve better than this derisory 3% rise (0.6% when inflation considered), RT 💙💙💙

What about junior doctors?

A 3% pay rise that doesn’t include junior doctors. That includes the majority of doctors working in intensive care and on the NHS frontline during the past pandemic.

This is not acceptable.

-the surgeon who takes out your kid’s appendix overnight (and the anaesthetist too).

It’s time for the government to cough up

NHS workers and trade unions – including grassroots campaign group NHS Workers Say No – are considering industrial action, and calling on the government to give NHS staff the 15% pay rise they deserve:

NHS Workers Say NO to 3%

Suggesting that the government has enough money to pay health workers a decent wage, David Schneider listed the government’s priorities:

WHAT THERE ISN'T MONEY FOR:
A proper pay rise for NHS staff https://t.co/XWoeKWboio

Solidarity with all NHS workers

Calling the government’s proposals a ‘kick in the teeth’, journalist Owen Jones expressed solidarity with NHS workers campaigning for a fair pay rise:

Our nurses carried this country through its darkest moments since World War II, and the government respond by kicking them in the teeth.

Nurses should throw everything they've got at the government – and we should back them all the way.https://t.co/KCgtCSOdS7

Setting out just how important it is for us all to support NHS workers’ campaign for decent pay, London Green Party trade union liaison Matthew Hull said:

We need to make clear to NHS workers that this is not just rhetoric.

If they ballot, we must support them to take industrial action.

If they vote for action, we must join them on pickets and offer material support to win this fight. (14/14)

This is just another case of the Tory government putting profits before people. We must stand in solidarity with NHS workers and unions, and demand that the government gives them the rights, pay, and conditions they deserve.