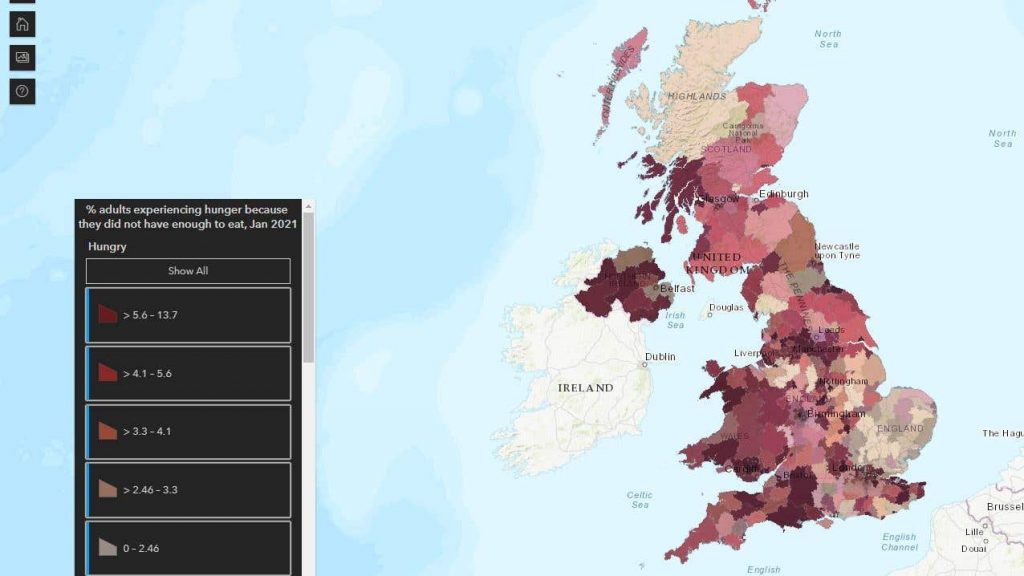 Rates of hunger are more than 150% the national average in one out of every six local authorities, according to researchers who created a map showing where millions of UK residents struggle to access food.

The University of Sheffield Institute for Sustainable Food modelled data from the Food Foundation and for the first time was able to identify food insecurity at a local authority scale.

This new analysis of the national data collected during the pandemic breaks down experiences of food insecurity into three distinct groups.

Secondly, those who are struggling to access food, including those who may have sought help within the last month with access to food, have cut back on meals and healthy foods to stretch tight budgets, or indicated that they struggled to access food in some way.

Data showed that in some places, 28% of adults were struggling.

And thirdly, those who worry about food insecurity or being able to continue to supply adequate food for their household.

The map shows it is England where the areas with the highest and lowest rates of food insecurity are located.

The areas worst hit by food insecurity are Wycombe, in Buckinghamshire, with 14% of people estimated to be hungry and nearly 30% of people struggling to access food.

The area also has high estimates for numbers of people who are worried about having enough food (22%).

This is followed closely by Hull, with 13% of people being hungry and more than one in five adults who struggled to access food.

The locality with least hunger, struggle or worry was St Albans.

The research found that in one out of every six local authorities, rates of hunger were more than 150% (one-and-a-half times) the national average.

And in one in 10 local authorities, the rate was almost double.

“We must address this problem”

Dr Megan Blake, from the University of Sheffield Institute for Sustainable Food, said:

This new map, for the first time, makes visible the patterns of food insecurity across the UK.

While no-one should have to go hungry, struggle to get or worry about having enough food, in some places it is at proportions that are especially shocking, particularly as we are a wealthy country.

If we are going to recover from Covid-19 we must address this problem.

We hope this clear breakdown of the data will be a useful resource for local authorities and the Government to use to address the challenges facing all people living with food insecurity, and that help can be tailored and targeted to those communities who need it, as the answer is not as simple as opening more food banks.

Food insecurity is undermining our chances of recovery after Covid-19. We need to urgently address this issue that pervades so many of our communities. No-one should have to be hungry.

According to data from the Food Foundation, in January 2021, 4.2% of adults across the UK reported that during the previous month they had been hungry but unable to eat at least once.

Almost half of local areas in the north of Ireland and in Yorkshire and the Humber had very high percentages of people who were hungry in January.

The data from the Food Foundation was from an online survey of 4,231 adults in the UK conducted on January 29 to February 2 this year.

We have spent billions to help those most in need and combat food insecurity throughout the pandemic.

This includes the £429.1 million Covid Local Support Grant, which was created to help families with food and fuel bills.