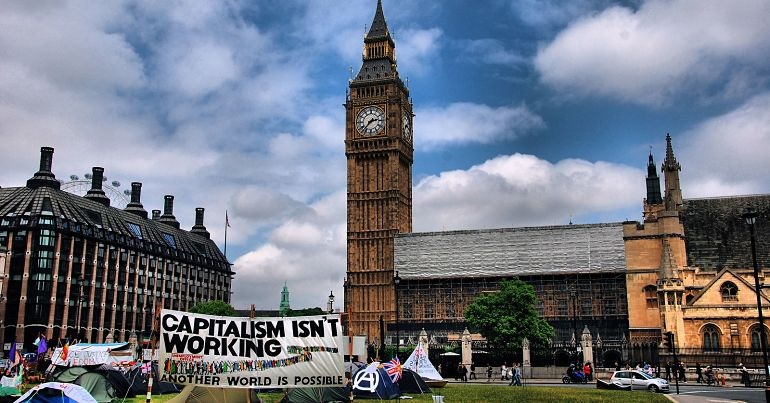 The Environmental Audit Committee (EAC), which is made up of a cross-party group of MPs, released a damning report on 30 June. The EAC assessment focused on the government’s policies relating to biodiversity in the UK. It asserted that the government is failing to put the biodiversity crisis firmly on the political agenda. The EAC argued that, amid a “colossal decline in global biodiversity”, and in one of “the most nature-depleted countries in the world”, political action is lacking in terms of “scale, ambition, pace, and detail”.

The report also took aim at the UK’s economic system and discussed how that should change to address the biodiversity crisis. Some of its recommendations for the “transformative change” needed will undoubtedly alarm Britain’s ruling capitalist class.

As The Canary has previously reported, the UK government likes to position itself as a ‘world leader’ on the climate and biodiversity crises. But its actions consistently fall short of its rhetoric. The EAC report cited numerous examples of such inadequate action. It noted that government cuts to spending on biodiversity has led to “a severe skills shortage in ecologists”. This shortage means authorities don’t have access to the necessary expertise to implement the government’s proposals, such as ensuring all infrastructure projects provide a net gain for biodiversity. The EAC report also highlighted that the government risks its marine protected areas (MPAs) becoming ‘paper parks’, meaning they’re protected on paper but not in reality. This is due to poor management, monitoring, and the government allowing destructive practices like bottom trawling to continue in them.

Furthermore, the EAC argued that the government isn’t adequately factoring nature into its decision making, nor does it have the necessary “long-term objectives” to achieve the goals in its Environment Plan.

EAC member and MP for Leicester East Claudia Webb told The Canary that “the government is not going nearly far enough to tackle the climate and ecological emergency”. She said:

Despite its rhetoric, the Government is doing all it can to resist concrete protections. This will leave our environment as a bargaining chip for new trade agreements that would undercut Britain’s environmental standards. We cannot allow trade deals and private profit to be prioritised over a liveable future.

The EAC report also addressed the negative impact of the UK’s economic system on biodiversity, and discussed how the UK should change that system to protect nature. The report called for the ‘urgent’ adoption of an alternative to gross domestic product (GDP) as the measure of a country’s economy.

As Christophe Bonneuil and Jean-Baptiste Fressoz wrote in The Shock of The Anthropocene, GDP presents “the economy as a closed circuit, a circular flow of value between production and consumption cut off from its natural moorings”. It essentially positions the economy as “an entity separate from society, politics and nature”.

But the EAC argued that:

Economic models that do not value nature and ecosystems cannot address climate change and biodiversity loss.

So in line with recommendations in the Dasgupta Review, which looked at the relations between economics and biodiversity, the EAC asserted that GDP by itself “is not an adequate way” to assess an economy because it “does not account for the depreciation of the natural environment”. It called for the government to instead measure the economy according to the UK’s “inclusive wealth”. This would include the country’s “produced, human, and natural capital”.

In with nature alignment

Critically, the committee additionally called for the government to add a “new fiscal rule” to its fiscal framework. The government is currently reviewing this framework. It dictates fiscal, i.e. economic, policy-making at the national level.

The EAC argued that the new rule should focus “on balancing our demands on nature with nature’s supply”. Again, this is in line with the Dasgupta Review. The author of that review, professor Partha Dasgupta, said:

Balancing ‘our demand’ with ‘nature’s supply’ in economic policy would be a sea change. Currently, there is no such balance because the UK’s economic system is a capitalist one. As Jason Hickel wrote in Less Is More: How Degrowth Will Save the World, capitalism is “organised around the imperative of constant expansion, or ‘growth’: ever-increasing levels of industrial extraction, production and consumption”, which is measured in GDP. This is, Hickel explained, growth “for its own sake” and completely devoid of the “self-limiting logic to growth” present in nature, whereby “organisms grow to a point of maturity, and then maintain a state of healthy equilibrium”.

In short, the capitalist model is severed from natural cycles. It doesn’t follow a ‘self-limiting growth’ logic itself. It doesn’t pay sufficient regard to the fact that the natural organisms it utilises are subject to that logic, or that many natural resources are finite, either. As a result, ‘our demand’ is outstripping ‘nature’s supply’ by a mile.

Importantly, the ‘our’ here refers to people in rich countries, who are overwhelmingly responsible for such demand. Indeed, as Bonneuil and Fressoz pointed out, Great Britain had reached 377% of its biocapacity by 1973. Biocapacity refers to the “capacity of ecosystems to regenerate what people demand from those surfaces”. So, by the early 1970s, demand in Great Britain was four times what the country was capable of regenerating.

This is why we’re in an environmental emergency.

Tackling the climate and biodiversity crises requires an economic system that ensures production – and consumption – is linked to, and limited by, nature’s processes. It would be a transformative change for the planet and its people.

The prospect of such a change is, however, likely to alarm Britain’s ruling capitalist class. That class, of course, includes the UK government. So whether it’s capable of delivering the transformative change we need is the burning question.