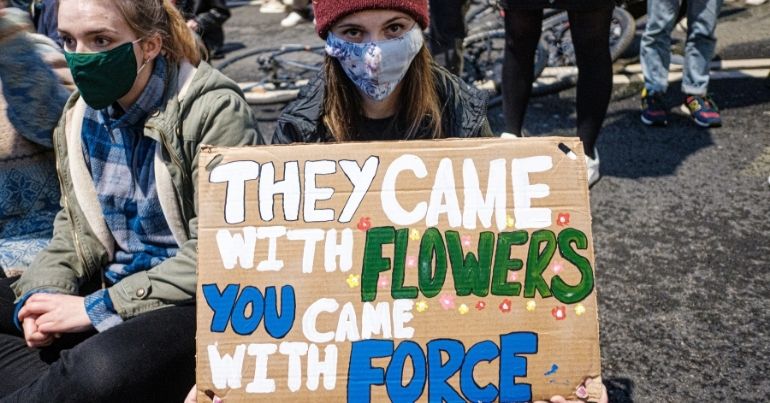 In March, hundreds attended a vigil in Clapham, London to pay their respects to 33-year-old Sarah Everard, who was abducted and killed by a serving police officer while walking home. As reported by The Canary, attendees were met with “violent” and heavy-handed policing.

Regarding the Sarah Everard vigil, the APPG report found that the Metropolitan Police’s “assumption that the gathering was unlawful… was the wrong place to start”. It adds that assistant commissioner Louisa Rolfe displayed a “fundamental misunderstanding” of the law regarding the right to protest in the UK. Regarding officer’s treatment of attendees, the report states that on several occasions, the police’s use of force “was not proportionate”. It concludes that the Met “did not take proper account of the right to protest, including the obligation to facilitate peaceful and safe protest”.

The APPG report also condemns Avon & Somerset Police’s handling of Kill the Bill protests in Bristol. Following the Metropolitan Police’s heavy-handed response to the vigil on Clapham Common, people came together to protest the government’s proposed Police, Crime, Sentencing and Courts Bill. The bill includes plans to clamp down on the right to protest, and to increase police powers. Echoing what witnesses told The Canary in March, the APPG report explains that events in Bristol “escalated after police undertook enforcement action against peaceful sit-down protests”.

The report confirms that Avon & Somerset Police “failed to distinguish between violent and peaceful protestors, leading to the use of force in unjustified situations”. The APPG highlights concerns about officers’ “disproportionate” and “excessive” use of force against peaceful protesters in Bristol, including the use of dogs, batons and riot shields. It adds that witnesses described the force’s crackdown on protesters following Bristol’s first Kill the Bill protest as “revenge policing”. Evidence includes the cases of Katie McGoran and Grace Hart, who both experienced wrongful detention at the hands of Avon & Somerset Police officers following protests.

The Network for Police Monitoring (Netpol) submitted evidence to the inquiry about the policing of protests in Bristol. Responding to the APPG’s findings, a spokesperson told The Canary:

The conclusions of this report are damning. We have long known that we cannot trust the police to protect our right to protest, and this report documents the utter failure of the police to consider their obligations under law to respect freedom of assembly rights. It even concludes that the enforcement approach taken by the police may have “caused, or at least exacerbated, some of the violence”.

Netpol has been calling for greater transparency from the police around the policing of protest and use of force, and in the absence of any data from the police on these we worked with grassroots groups to submit detailed evidence of the police violence in Bristol. Serious questions need to be asked and officers need to be held to account, as the report concludes that Avon and Somerset police’s use of force was excessive and unjustified, and may even amount to a criminal offence.

Continued resistance to the bill

The APPG sets out recommendations regarding the government’s proposed Police, Crime, Sentencing and Courts Bill, which returns to Parliament on 5 July. Responding to this, a spokesperson from Netpol told The Canary:

We wholeheartedly welcome the recommendation of the report to completely remove the sections of the Bill which give the police powers to restrict protests. But this still wouldn’t address the issues with this draconian Bill, as it doesn’t address the measures which criminalise Gypsy, Roma and Traveller communities, or extend the power of the state to stop, search, surveil and incarcerate vulnerable people.

Resistance against the proposed draconian bill continues unabated. Thousands of protesters descended on London on 26 June. The Kill the Bill coalition is now urging people to ask their MPs to support amendments to the proposed bill. These include Zarah Sultana’s call for an inquiry into the policing of protests, and Apsana Begum’s amendment seeking to scrap government plans for ‘secure schools‘. In spite of the heavy-handed policing meted out against peaceful protesters in March, Bristol’s 14th Kill the Bill protest is due to take place on 3 July.