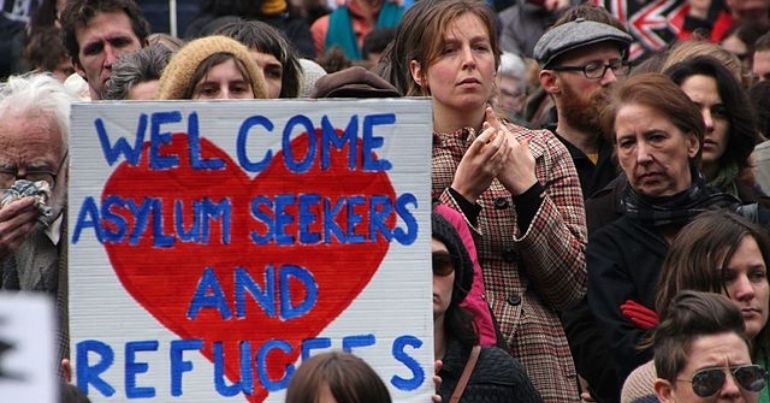 UK asylum queues have grown massively since 2010. New figures obtained by the Refugee Council say that waiting lists are nine times longer than they were a decade ago. But a quick look at where asylum seekers are coming from tells a very important story. Thousands are fleeing countries where the UK and its major allies have waged literal or economic wars.

The Refugee Council’s new report, titled Living in Limbo, warns that as of March 2021 there were over 66,000 asylum seeker awaiting “an initial decision from the Home Office“. This is nine times the number of people waiting in 2010.

When countries of origin are taken into account, the long list of asylum seekers starts to make sense. For instance, a 2019 House of Commons report lists Syria, Afghanistan, Iraq, Colombia and Venezuela, as the top five asylum seeking nationalities in the EU. Pakistan, Nigeria, and Iran all made the top ten. These are counties which have suffered, or are suffering, occupation or intervention by the UK and its allies.

UN figures for 2020 on UK asylum put Iraq and Iran in the top four. The same document highlights that Iraqi and Iranian children were very prominent among Unaccompanied Asylum-Seeking Children (UASC) figures.

Despite right-wing claims, UN figures show that the UK takes few refugees relative to other countries. The vast majority stay in their “region of displacement”. Turkey and Pakistan had the most as of 2019, with 3.6 million and 1.4 million respectively.

The UK also doesn’t have a high number of asylum seekers overall. Again, according to UN figures, Germany, France, Spain, and Greece all have tens of thousands more.

This hasn’t stopped UK officials pushing for hardline policies to deal with asylum seekers and refugees.

On 28 June, it was reported that the UK was again considering ‘offshoring’ asylums seekers like Australia, whose refugee policies have been widely criticised.

UK officials are in talks with Denmark, Al Jazeera reported. In June, the Danes passed a law to deport refugee outside the EU And Rwanda was mentioned as a possible destination for asylum seekers.

Bashing poor and desperate people is what UK governments are all about. But the figures tell a story. A majority of displaced people in the EU, and many who make it to the UK, are victims of UK foreign policy. There are reasons that places like Iraq, Afghanistan, and Syria are so well represented in refugee statistics and the UK’s ever-growing asylum-seeker backlog.