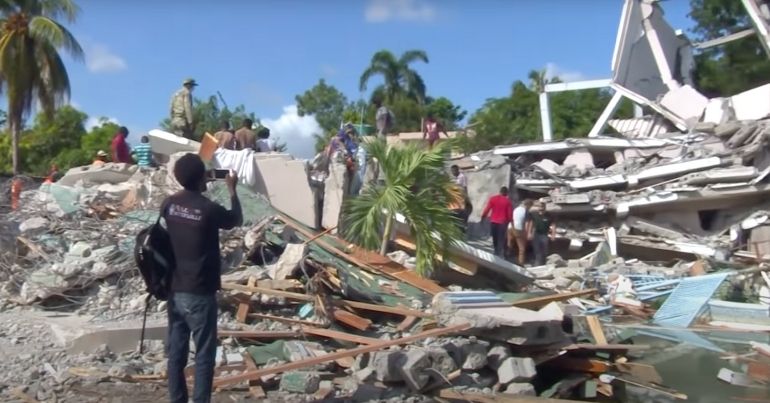 Heavy rain from Storm Grace has drenched Haiti after an earthquake devastated the nation. The earthquake killed over 2,000 people, and injured more than 12,000. The tropical storm hindered urgent attempts to find shelter and survivors. It has also caused further damage to the nation’s compromised infrastructure. People with Haitian ties are urging those looking to support disaster relief to avoid large NGOs, and instead contribute to grassroots organisations that are creating resilience on the ground.

A history of disasters

Tropical Storm Grace deluged Haiti with heavy rains while people were searching for survivors and safety in the wake of a 7.2 magnitude earthquake. The earthquake caused devastating damage to the nation’s homes, roads, and infrastructure, and trapped people under rubble. The disaster has left tens of thousands of people without homes, and hospitals are beyond capacity.

The country is marred by its brutal history of slavery, colonialism, and neocolonialism. 21 August will mark the 230th anniversary of the beginning of Haitian Revolution, in which enslaved Africans defeated Spanish, British and French colonial powers in a 13 year war. In 1825, France forced the Haitian government to pay 150 million francs (over $21bn in today’s terms) in order to certify Haitian independence, plunging the nation into debt.

Continuing the practice of western imperialist intervention in the region, the US occupied Haiti for 19 years from 1915, and exploited the nation’s people, land, and resources. Some argue that neocolonial western powers continue to hamper development in the region under the guise of foreign aid.

The most recent natural disasters struck at a moment in which Haiti is struggling with political turmoil. In July, unidentified attackers assassinated the nation’s president, leaving a power vacuum. And the nation is still recovering from the devastating 2010 earthquake, which killed over 200,000 people.

Say no to NGOs

Concerned members of the international community are coming together seeking to support relief efforts in Haiti. Notably, US tennis star Naomi Osaka pledged her championship prize money to relief efforts. But people with Haitian ties are urging those looking to support survivors to avoid donating to large NGOs. The Haitian Women’s Alliance urged Osaka support local grassroots organisations, as “many of these large NGOs have taken advantage of Haiti during natural disasters”.

Responding to recommendations that people donate to organisations including the Red Cross, Save the Children, the World Food Programme, and UNICEF, one person tweeted:

As a Haitian I say other than Doctors Without Borders Do Not Donate to these organizations, especially the Red Cross which failed Haiti terribly last earthquake

Urging people to hold off donating to large international NGOs, another person shared:

Haitians have consistently asked people NOT to donate to the Red Cross to support the island.

People donated $500m to the Red Cross in the wake of Haiti’s 2010 earthquake. The organisation planned to build 700 new homes, and claimed to have “provided homes for more than 130,000 Haitians”. But according to a ProPublica and NPR investigation, four years after the earthquake, the Red Cross had built just six permanent homes by 2015. According to the Red Cross budget, the expatriate project manager received $140,000 in exchange for his efforts (ProPublica).

The ‘Republic of NGOs’

Although NGOs have carried out and continue to carry out vital work in Haiti and beyond, the region has a history of abuses of power carried out by leaders in the aid sector. Oxfam stands accused of covering up allegations that senior staff in Haiti hired sex workers, some of whom were potentially underaged. In 2018, the Haitian government withdrew Oxfam GB’s right to operate in the country “for violation of Haitian law and serious violation of the principle of the dignity of the human beings”. And at least 134 UN peacekeepers have been accused of child sex abuse in Haiti between 2004 and 2007.

These abuse scandals are part of a bigger problem with foreign aid in the region. Haiti is known as the ‘Republic of NGOs‘. Before the 2010 earthquake, up to 10,000 NGOs operated in the region. The sector boomed in the wake of the disaster. These large international organisations wield more money and power than the Haitian government, and now comprise something of a de facto government with little to no accountability and regulation. And while international food aid does provide affordable nutrients, it comes at the cost of local agriculture and self-determination.

Meanwhile, the predominantly western, white, and male leadership in the aid sector has neocolonial and imperialist overtones. This dynamic continues to withhold power from Black people, Indigenous people, and People of Colour working on the ground in the global south.

Those with Haitian ties are urging people to contribute to grassroots organisations which are rooted in local communities. People can donate to foundations such as the Centre Hospitalier de Fontaine, which supports underfunded schools and hospitals in Haitian communities. The group Locally Haiti supports “locally led programs and community-based work” in the region’s rural areas. And the Ayiti Community Trust is a Haitian-led foundation which provides grants to local initiatives. Anticonquista’s Nicholas Ayala recommends donating to grassroots organisations such as the Haiti Action Committee and the Haiti Emergency Relief Fund. Meanwhile, the Haiti Response Coalition has coordinated a live document of reputable organisations that members of the concerned international community can donate to.

We must listen to the voices of those directly affected by the recent disasters. The region doesn’t need further foreign intervention. It needs support building resilience and self-determination from the ground up. We can start by donating to organisations which directly fund and empower local communities.