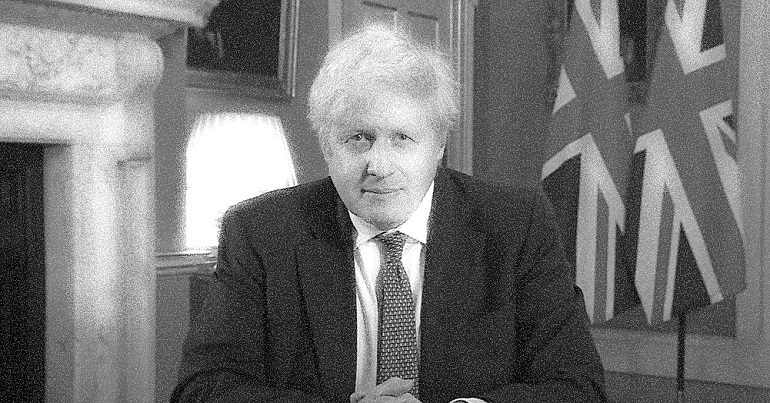 Comments by Boris Johnson have once again ignited a row over the trajectory of his government. The PM’s use of divisive and harmful language forms part of a wider picture. It’s one that shows the creep of so-called “corporate fascism” in the UK.

The Law Gazette reported on comments Johnson made during an LBC interview. Host Nick Ferrari asked the PM:

to respond to comments by Labour party leader Sir Keir Starmer that the Conservatives had become the party of crime and disorder.

Johnson replied: ‘When you look at Labour, you see a party that voted consistently against tougher sentences for serious sexual violent offenders. The Labour opposition has consistently taken the side of, I’m afraid, left wing criminal justice lawyers against, I believe, the interests of the public’.

The legal profession has condemned his remarks. The Law Gazette quoted the Secret Barrister as saying:

I prosecute rapists while you prolong the agony of victims by cutting justice to the bone. One of us is acting against the interests of the public, Boris Johnson. It’s not me.

Of course, this harmful, far-right language is nothing new from the PM.

Repeated attacks by Johnson and Patel

As the Guardian reported, in October 2020 Johnson gave a speech to the Tory Party conference. He said:

We’re also backing those police up, protecting the public by changing the law to stop the early release of serious sexual and violent offenders and stopping the whole criminal justice system from being hamstrung by what the home secretary would doubtless – and rightly – call the lefty human rights lawyers, and other do-gooders.

Johnson was backing up Priti Patel, who also made a speech at the conference. She said in relation to the asylum system:

Moreover, Patel and the Home Office have repeatedly used phrases like “activist lawyers” and “lefty lawyers”.

The real-world effects of this hate-inciting language could be fatal. Allegedly, a far-right supporter who carried out a knife attack at a London law firm that deals with immigration cases was inspired by Patel’s comments. Moreover, in response to the Home Office spokesperson’s comments in the Telegraph, people on Twitter called lawyers ‘scum bags’; called for them to be deported; said they were “enemies” of the “great people of the UK”, and called for them to be ‘crushed’.

But the bigger issue here is that the Tory government’s use of language is part of a deeper, even more worrying agenda.

As The Canary has repeatedly written, all the signs are there that the UK is descending into what’s been called “corporate fascism”. We quoted Johanna Drucker’s comments about Donald Trump’s US government:

Fascism is defined as the alignment of power, nationalism, and authoritarian government. We are there.

But she noted that a better description would be:

Corporate fascism [which] is wanton, virulent, and unregulated. Wanton because it has no regard for consequences (psycho-socio-political pathology is without constraints). Virulent because the full force of inflamed populism is fuelled by self-justified rage and unbounded triumphalism. Unregulated because the capital is now amassed in extreme concentrations of wealth without any controls. Corporate because Citizens United created the legal foundation for corporations to act with the same rights, privileges, and protections accorded to individuals, thus sanctifying the role of disproportionate power within a mythic construct of corporate entities.

The Canary wrote about 14 warning signs that showed the UK’s descent into corporate fascism. These included:

Johnson and Patel’s attacks on refugees and lawyers ticks all these boxes. Moreover, there are numerous other examples. Take the Home Office, again. As Byline Times reported, it’s:

just closed a consultation to change the Official Secrets Act, which includes plans suggesting that journalists should be treated in the same way as those who leak information (‘unauthorised disclosures’) and commit espionage offences. It has also proposed increasing maximum sentences for such offences from two to 14 years in prison – longer than those for child cruelty crimes and the same as causing death by dangerous driving.

The warning signs are there. Moreover, notions of fascism are not some memory of the previous century. The Trump presidency is one such example.

Interestingly, in recent years television dramas in the US have addressed the issues head-on. Legal drama The Good Fight had a long-running storyline about people killing lawyers, against the backdrop of Trump’s fascist presidency. The Handmaid’s Tale is littered with analogies to the real world. As its original author Margaret Atwood’s character June Osborne pondered about the coup by far-right Christian fundamentalists:

Now I’m awake to the world. I was asleep before. That’s how we let it happen. When they slaughtered Congress, we didn’t wake up. When they blamed terrorists and suspended the constitution, we didn’t wake up then, either. Nothing changes instantaneously. In a gradually heating bathtub, you’d be boiled to death before you knew it.

Yet still, even with Trump and high-profile TV addressing the issue, people seem unaware of what’s happening.

Is it too late?

As one Twitter user summed up recently about the UK:

The thing about fascism is that you can tell people until you’re blue in the face that it’s coming, but most of them won’t believe you until it’s too late.

The Johnson administration’s descent into corporate fascism is very real. It may not be the same as how the history books teach us fascism is, but it’s a 21st century version nonetheless. Whether or not most of us wake up in time to stop it remains to be seen.