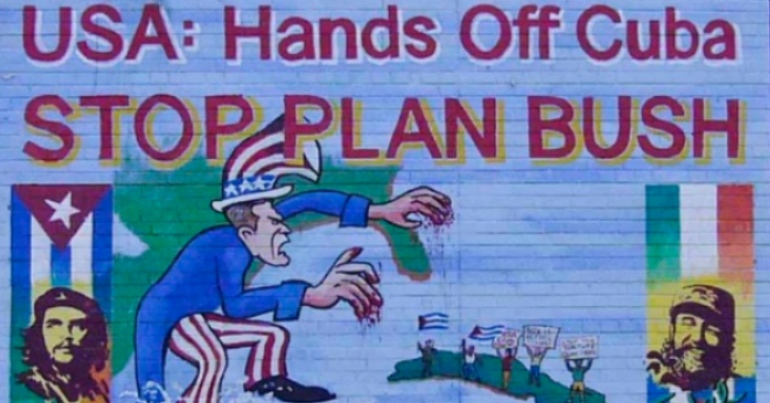 The US government and allies in the right-wing Cuban exile community have been seizing on recent protests in Cuba to further their regime change strategy. And, as would also be expected, the corporate-owned media has largely been parroting this line. Moreover, it’s been leaving out crucial facts that undermine Washington’s narrative.

The most prominent aspect of this lying by omission is a consistent failure to name the biggest cause of suffering for Cubans. And that’s overwhelmingly been a crushing set of US-imposed economic sanctions. Now, a number of NGOs and prominent academics have signed a damning open letter to the US government. It’s calling on president Joe Biden to finally lift sanctions against Cuba.

As The Canary has reported, 11 July witnessed a wave of unrest wash over Cuba. There are conflicting reports about the protesters’ primary grievance. The US government and right-wing Cuban-American exiles generally argue that people were protesting against the Cuban government’s repressiveness and its purportedly poor handing of the coronavirus (Covid-19) pandemic. Other reports, however, argue that protesters were primarily motivated by shortages of goods and medicines.

The latter explanation seems more likely, given the US government has subjected the island to a roughly six-decades-long ‘embargo’. Better described as an ‘economic blockade’, the set of coercive measures has probably been the biggest cause of suffering in Cuba. And according to United Nations (UN) figures, it has cost the Cuban economy over $140bn. Despite this reality, however, reports in the corporate-owned media either fail to mention the blockade or underplay its impact on the impoverished island.

The US government, meanwhile, has now added further sanctions to the already-existing ones that make up the blockade. On 22 July, Biden announced new sanctions against the Cuban armed forces and Cuba’s Special National Brigade, which the White House claims engaged in repression against the 11 July protests.

In response, on 28 July, activists sent an open letter to Biden denouncing the US role in Cuba’s suffering. The letter states:

While Cuba’s economic crisis has been caused by numerous factors, U.S. sanctions are clearly contributing to the worsening humanitarian situation the island is facing, and your administration should take the necessary steps to alleviate the suffering of the Cuban people.

In light of this, the letter makes the following demands on the Biden administration:

1) Lift all restrictions and caps of family and donative remittances that could help Cubans purchase food and medicine on the island;

2) Remove the requirement for specific licenses to send medical supplies to Cuba and the “end-use verification” requirement for humanitarian imports, both of which vastly increase the red tape in sending aid to the island from the U.S., and which discourage both donors and sellers; and

Signatories include prominent NGOs such as the Washington Office on Latin America (WOLA), Global Health Partners, and Foundation for a Civil Society. It’s also signed by academics from universities across the US, including Princeton University, the New School, and the City University New York.